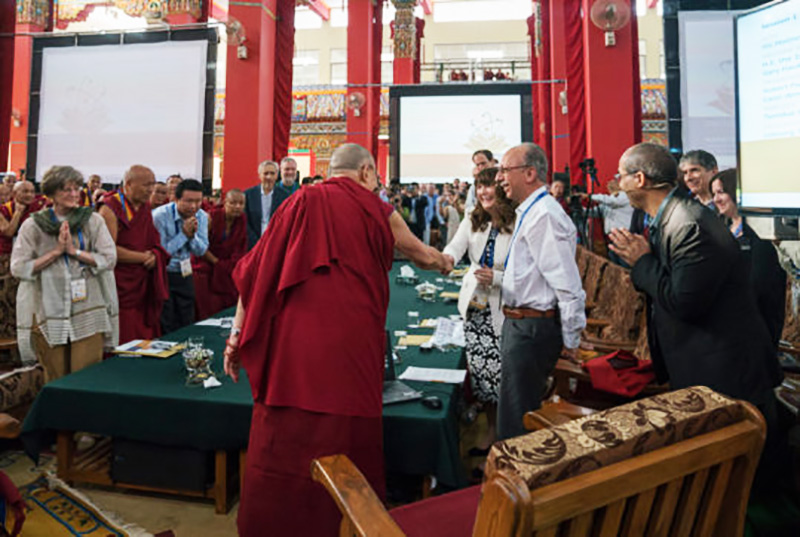 Mundgod — Over three thousand monks, nuns, school children, and friends gathered in the Loseling Assembly Hall of Drepung Loseling Monastery in Mundgod, South India on December 18th for the first day of the International Emory Tibet Symposium on Buddhism and Science.

The three-day Symposium was introduced by Geshe Lobsang Tenzin Negi, who explained that it was a fulfillment of His Holiness’s vision for dialogue between Buddhism and science, and this year, happened to coincide with the 600th anniversary of Drepung Monastery, one of Tibet’s great seats of learning.

His Holiness then began, “Respected brothers and sisters, I’m very happy to be here and it’s a great honor for me to participate in these proceedings, particularly in this 600th year since the founding of Drepung Monastery.

“When we held the first meetings between scientists and Buddhist scholars organized by the Mind & Life Institute I suggested that Buddhism referred to a certain training aimed at achieving nirvana and Buddhahood. However, in 30 years of conversations, we have never talked about either of these goals, discussing our present reality instead. Consequently, I would prefer to refer to these discussions as between Buddhist science and modern science.

“So far, modern science has focused on material things with little attention to the workings of the mind and emotions. And yet today many of the problems we face arise because of our disturbing emotions. I believe that by learning more about inner science and how to tackle our emotions we can ensure individuals, families and the wider community are happier and more at peace. When there are differences between us we need to enter into dialogue to resolve them and to do that we have to have respect for each other. As part of the process it will be helpful if science examines the mind and emotions from an academic point of view.”

“The Nalanda tradition is based on reason and logic, and it is on this basis that we are able to enter into discussions with scientists. The first purpose of this symposium is to enrich understanding on both sides. The second is to support the general promotion of secular ethics, or as I now refer to them in the West, where people are more wary of the word ‘secular’, universal values."

The first day was then filled with presentations from prestigious scientists and scholars, including anthropologists, philosophers, psychologists and others all elaborating on the relationship between Buddhism and science.

His Holiness began the second day of the symposium giving an interview to Dr Sanjay Gupta, a physician and broadcaster, to be broadcast by CNN, which, like Emory University, is based in Atlanta, Georgia, USA. Dr Gupta, who is here to cover the Emory Tibet Symposium, began by asking His Holiness the importance of a genuine smile.

“There may be some other animals who have ways of expressing their warm feelings,” His Holiness replied, “but being able to smile seems to be unique to human beings. As social animals we need friends. Friendship is based on trust and trust grows when we show each other genuine affection. If you are honest, truthful and of service to others, no matter what else is going on you can feel self-confident.”

Asked why, if basic human nature is compassionate, we don’t see more of it in the world, His Holiness replied that when children are five or six years old they are innocent and open-hearted. They don’t are about nationality, faith, race and so forth. However, as they grow up in a materialistic society, their basic human values, such as compassion and concern for others, tend to be neglected and become dormant. Gradually they learn to cheat and bully others and in extreme cases kill them.

“In the USA,” His Holiness continued, “we see growing numbers of cities taking to calling themselves ‘city of kindness’ or ‘city of compassion’ and developing programs to encourage these qualities in children.

“In India and the US too we are working on a draft curriculum to introduce universal values into the mainstream education system. We plan to run it as a pilot project in some schools and if there are positive results we will make it more widely available.”

The Emory Tibet Symposium resumed in the Loseling Assembly hall for the second day, focusing on physics, specifically asking what the fundamental constituents of the universe are and how it originated.

After listening to the presentations of several scientists, His Holiness contributed to the panel discussions regarding the function of karma and the role of subtle mind and energy in the formation of the universe. He also recommended that what have often been confusingly referred to as the elements: earth, water, fire and air, now known as ‘source particles’, would be more helpfully referred to in terms of solidity, fluidity, heat and mobility. He also remarked that there is not only motion through space, but also motion through time.

The third and final day of the Symposium was devoted to neurosciences and the question what is mind and its relation to the body, brain and subjective experience. Scientists talked extensively about consciousness, human experience and complexity of the brain.

During the ensuing panel discussion, His Holiness asked Koch, a noted American neuroscientist, if he could measure whether a distorted consciousness could be transformed into doubt or wisdom. Koch indicated an inability to either design or conduct the requisite experiment, revealing that most of such work is done on mice. His Holiness observed that there is a significant qualitative difference in human consciousness and that of a mouse.

“For many years I have suggested investigating Buddhist and non-Buddhist practitioners with acknowledged meditative experience,” he said. “There are, for example, some whose development of ‘inner heat’ is such that they can sit naked in the snow in the high mountains.”

His Holiness closed the final day of the Symposium by thanking the presenters and panelists for their participation, expressing gratitude to Drepung Loseling for providing the venue and the various technicians involved in ensuring everything worked and the skilled translators.

“In conferences like this our first goal is to improve our knowledge and understanding and to that end we have held profound discussions,” he declared. “But the second goal concerns the happiness of all 7 billion human beings alive today. If the 21st century is to be different from the 20th century it is important that those who belong to the younger generation today conduct themselves differently.

“Some scientists report evidence that basic human nature is compassionate. We have neglected this in the past, despite having the seed within us. We have to find ways to cultivate it on the basis of common sense, common experience and scientific findings. At present there is great distress in many places, which arises from mistaken ways of thinking. If our goal is a happier, more peaceful world in the future, only education will bring change. We cannot remain indifferent. I am a follower of the Buddha, but I am also just a human being. I am trying my best—I only ask that you do too.”