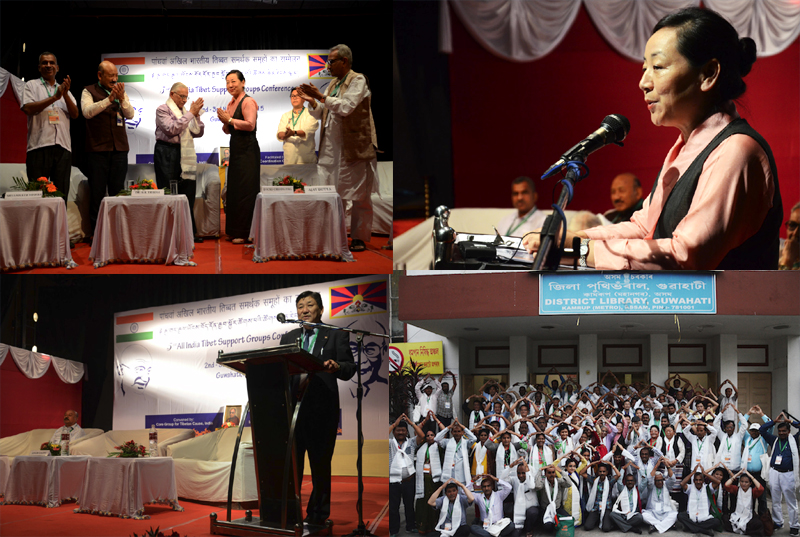 Guwahati, Assam — "Make Tibet a key issue in any global climate change conference," a senior Tibetan official said Tuesday, during a two-day All-India Tibet Support Group Meeting for the peaceful solution of the issue of Tibet.

Dicki Chhoyang, Kalon or head of the Department of Information and International Relations (DIIR), addressed the closing day of the All-India Tibet Support Group Conference, said a report by the  Tibetan administration media.

Ms Chhoyang opened her remarks by reaffirming her support and implored the international community to protect the fragile ecosystem of Tibet. "On 20 October, we launched a campaign called 'Tibet – Climate Action for the Roof of the World," she aid.

Ms Chhoyang quoted His Holiness the Dalai Lama recorded a special video message in which the Tibetan leader said "this blue planet is our only home. And Tibet is the roof of that home."

This campaign was launched to 'try to reach an agreement' at the 'very important' "conference on the environment and climate change in November-December at Paris, where world leaders include President Obama and Xi Jinping, ," she said.

"We want to highlight the climate change issues on Tibet that have a global impact and share that with the rest of the world including India and the people of the northeast, who are directly affected by several of these issues such as erosion of permafrost, drying of rivers or melting of glaciers."

According to the DIIR report, Ms Chhoyang also spoke about "the campaign's 10-point call to action that urges the United Nations to recognize the global significance of the Tibetan plateau and commit to a strong climate change agreement at COP21."

She said "iIt also called on China to respect the traditional way of life of Tibetan pastoral nomads, regulate urbanization and implement its own recently adopted environmental protection law."

The Kalon also spoke about the historical bond shared by the two countries of Tibet and India, drawing on the Tibetan script, religion and poetry that are largely derived from ancient Indian cultural heritage.

"Tibetan and Indian cultures are like the two branches of the same Bodhi tree. The Tibetan script is derived from the Gupta script of India and the Buddhism adopted by Tibetans is referred to as the Nalanda tradition," she said, adding that "there is also a third aspect to the Indo-Tibetan bond that is of great interest."

"Tibetan poetry is based on the Kavyadarsh (classical Sanskrit poetry), Tibetan morality and norms are based on the Neeti Sastra (collection of morals written by Baddena, a Telugu poet) and the Tibetan treatises on the music are based on the Natyashastra (an ancient Indian treatise on theater, dance and music)," she added, saying "as you can see, we have a multi-dimensional, longstanding and deep-rooted friendship, and partnership with India."

Mr Sonam Norbu Dagpo DIIR Secretary spoke about the present situation of Tibet, underlining the critical political and human rights situation prevailing inside Tibet under the repressive policies of the Chinese government.

"Since China's invasion of Tibet, the situation inside Tibet has been of grave concern to everyone. Therefore, in order to whitewash the reality of Tibet and to portray a harmonious and prosperous image of Tibet, China has published a series of White papers on Tibet."

"But in reality, Tibetans do not have human rights, they do not have rights to practice their own religion and culture, and Tibetan language has been banned and Tibetan Buddhist teachings have been restricted," the Secretary said.

"After the death of Mao Zedong, there was a slight liberalization. Tibetans tried to revive the monasteries and religious centers. However, though the monasteries are rebuilt, restrictions were imposed on the number of monks. Moreover, Communist Party officials called Democratic management Committees are constantly monitoring the monasteries," he added.

Others who spoke at the concluding session of the conference include Dr N.K. Trikha, National Convener of the Core Group for Tibetan Cause, Mr Jigme Tsultrim, Coordinator of India-Tibet Coordination Office (ITCO), among others.

The Tibetan administration media report says 'the two-day conference was widely coverned in the local and national print and electronic media including the Times of India, The Assam Tribune, The Telegraph, The Sentinel, Janasadharan, Dainikpurvoday, etc.'