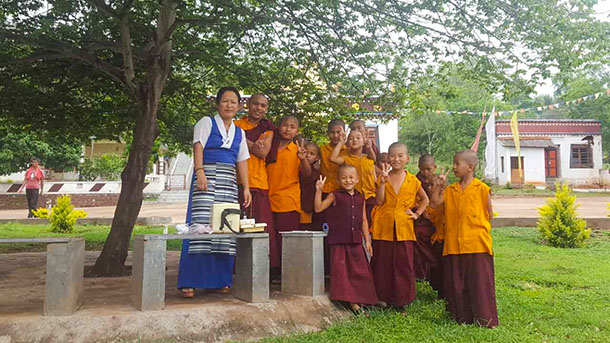 Kollegal In Focus: Part Six
Brussels, Belgium — Dhondenling, Karnataka- Dhondenling Van Thiel Charitable Trust Hospital is the only hospital within 45km radius in Dhondenling. The hospital was established in 1974 by MYRADA which is an India based NGO.

The administration and legal rights were transferred to Department of Health, Central Tibetan Administration in 1986.

The settlement, being very remote and therefore far from urban cities, heavily depends on this hospital to provide them with basic and immediate medical care. Here Namkhang Lhamo, a senior nurse at the hospital, speaks about the hospital's journey since the beginning.

"The hospital was founded more than 40 years ago with the financial support of Mr Van Thiel and I have been working here since 2004. Prior to that i was working in Kamagere hospital and i did my graduation in Bangalore. At the beginning, volunteers for nurses were taken in from the people and they were trained for four months by an Indian doctor in vaccination and other basic first aid practices.

This has been the only hospital in the region. There are 22 staff working in the hospital which include both medical and non-medical staff. The hospital has been situated such that it is in the heart the settlement. Although the hospital is affiliated to CTA, it is not only for Tibetans. We treat both Tibetan and Indian patients. The hospital is open for everyone. The hospital is equipped to give basic diagnosis and treatment. We try our best to treat our patient but when it is beyond our reach, we refer them to higher centre in Mysore or Bangalore.

The hospital has various departments. These include Ophthalmic, dental department, physiotherapy, laboratory, pharmacy, eye theatre and X-ray. It also had a female and a male ward which can accommodate ten patients each and a maternity ward. On an average day, we have 60 patients and the most common report are of upper respiratory tract infection, diabetes, hypertension and diarrhea. These days, there have been more reports of diarrhea. When a serious case comes in, as in the case of a road accident, we perform the required first aid and then refer the patient to higher centres. In the case of poisoning, the doctor treats the patient.

"We have a medicare program in the hospital. It is called Tibetan Medicare System (TMS) and it covers five people in a family. To avail this, one had to pay an annual fee of 3590 rupees. The benefit of this program is that if three of the five member in the medicare fall ill, the family can claim 1,20,000 rupees. There is also a condition that is the patient has to be admitted within 24 hours.

If the patient is in need of a surgery, there is another package system. Many Tibetans have Yashasvini health insurance scheme but I think TMS has much more benefits to offer in our Tibetan society. We also support the destitute people by giving them medicine on credit and their bill is sent to the Health Department which covers the bill. Also a patient with mental disorders get a benefit of 50% and an HIV patient gets 100% benefit. Pregnant women get iron and calcium supplements for none plus two months and a benefit of two ultra sound and the necessary vaccinations of the child is taken care by the hospital.

"We have built new infrastructure where we have shifted the hospital to. The walls of the old hospital because of rain, had become a breeding ground for fungus. Prolong exposure to fungus can lead to all kinds of diseases even cancer and therefore with the aid of Vimala association, an Italian based, we were able to built a new hospital.

"Our hospital does not only treat patients but also educate them about healthy lifestyles and various diseases that are prominent in the society, so as to help prevent it. The medical staffs visit all 22 villages, the school and various monasteries within the settlement, carrying out health talks about disease control and prevention. We celebrate HIV day, Hypertension day and other days of serious diseases and use them to spread awareness about them. Also when a disease like dengue becomes epidemic, we visit the villages and educate the people about it and the prevention methods. It is a must that we give at-least one health talk in a month.