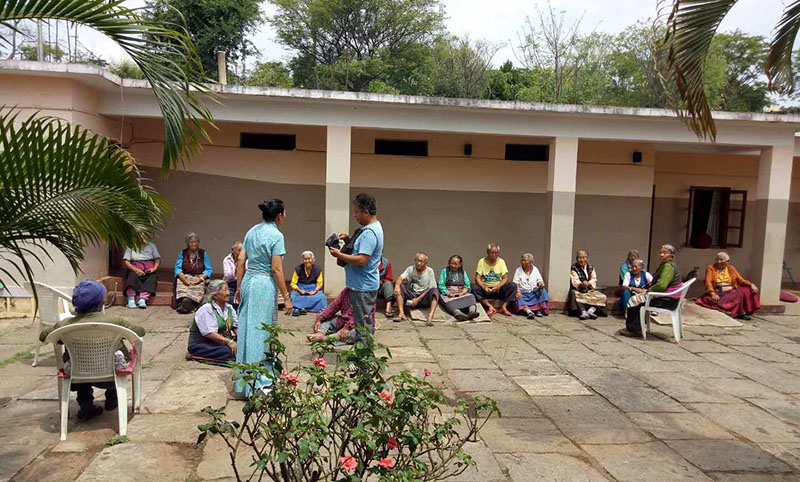 Kollegal Dhondenling settlement, Karnataka — Kollegal Dhondenling, Karnataka: Old age home is the home for elderlies. It is more like a hostel for the elderlies whose children can not look after them because of various reasons. The idea of establishing such a home was suggested by His Holiness the Dalai Lama. All the settlements have old age home and they are all affiliated to the Office of representatives of the Central Tibetan administration(CTA) of each settlement.

"As for the daily schedule of the home, the rules are not strict. They wake up, freshen themselves and have breakfast. Then there's prayer session that lasts for about two hours. Some days we have prayer session twice a day especially on Wednesdays. On Sundays, it's kind of like their holiday. Some of them go for outing to Sumdo or their friends' and relatives' house. Other just stay at home and spend the day relaxing.

"The reasons for the elderlies having to stay in the old age home is because some of them are too weak to work to earn for themselves and have no one to take care of them. So they appeal to the head of the settlement (Kongo) to stay at Old age home, most times with the help of the head of the village. Kongo decides who is in dire need for assistance. Sometimes the Kongo hears of elderlies in need for help, he himself visits the villages to overlook conditions of those people. And if they need help, the office provide them but some of them refuse help from them.

"There are rules here for the elderlies but they have as much freedom as they might have at home. They is no barring them from any thing and the rules are quite lenient.

"The strength of the house is 32. We cannot take in more than 32. And when one dies the village from where the person came from takes responsibility of the body if there are no claims.

The old age homes receives donation both in the form of money for the elderlies and special food from the people. They receive donation to perform different prayers.