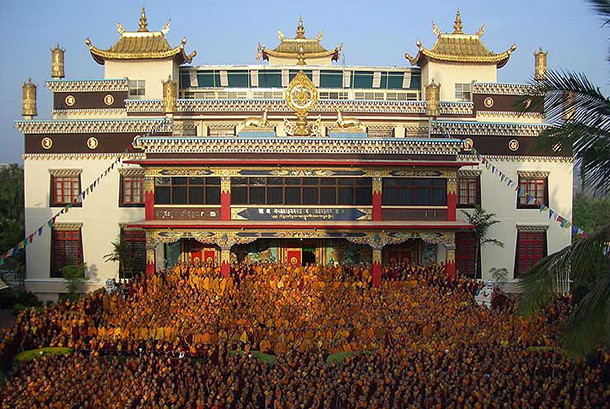 Bylakuppe, Karnataka State, South India — His Holiness Penor Rinpoche was born in 1932, the Tibetan year of the water monkey in Powo region, of eastern Tibet to father Sonam Gyurmey and mother Dzom Kyi, according to the prophecy of the fifth Dzogchen Rinpoche. At the age of five, His Holiness Penor Rinpoche was invited to Palyul Namgyal Jangchub Choling Monastery and enthroned as the eleventh throne holder of the Palyul lineage amidst thousands of disciples.

In 1952 His Holiness received numerous profound instructions on Dzogchen, the highest teaching of the Nyingma tradition, and clarified all his doubts and enhanced his understanding of the views and meditation of Dzogchen.

Later on, due to political instability in Tibet, His Holiness was prophesied by deities and dharma protectors to go to India. It took an arduous month long journey for His Holiness and his group to reach Pamakod in Arunachal Pradesh.

In 1961 His Holiness moved to Bylakuppe, Mysore district of South India. He acted as abbot, initiating the tradition of three practices of Vinaya and conducting the summer retreat. In 1962 he established the Namdroling Junior High school and gave the school the name Yeshi Woesal Sherab Raldri Ling in 2004. He then laid the foundation stone of Namdroling Monastery in 1963 when there were only ten monks. Gradually the number of monk increased to more than 8000 monks total today. These monks are primarily from Tibet, Nepal and Bhutan as well as from various parts of India such as Sikkim, Himachal Pradesh, Assam, Arunachal Pradesh, Ladakh, etc., with a few in residence from other countries.

For the sake of listening, contemplation and meditation, there are several divisions within the monastery: the junior high school, the philosophical college, and the retreat center. Including the Golden temple, there are sixteen different temples throughout the monastery.

The monastery also contains one main and three branch libraries, an office of editorial committee, and all necessary things and kits are available in the monastery itself including the medical clinic and dormitories. There are more than 1300 prayer wheels and seventeen stupas (sacred reliquaries) which functions as supports for dharma practice.

At a distance of one kilometer from Namdroling Monastery, there is nunnery called Tsogyal Shedrub Dhargyal Ling Nunnery. There are more than 1200 registered nuns, of whom more than 700 are usually resident. The nunnery is complete with its own Junior High School, institute and retreat centre, as well as other facilities comparable to monastery. They have their own drivers and all the functions are carried out by the nuns, from principal to cooks. There are also four large filter tanks that dispense clean and hygienic water for both institutions, as well as to visitors.

Until 2009, H.H The Penor Rinpoche compassionately provided food, clothing, accommodation and the facilities for Dharma study and practice to all the residents’ monks and nuns. Now these responsibilities are jointly taken care of by H.H Karma Kuchen Rinpoche (the 12th throne holder of the Palyul tradition), H.E. Khentrul Gyangkhang Rinpoche, H.E. Chogtrul Mugsang Kunchen Rinpoche, and the three senior most Abbots.

Needing adequate space for the gathering of his entire, rapidly growing monastic community, H.H. Penor Rinpoche began construction of the golden Temple in 1995 was completed in1999. The temple was built according to the architectural tradition of Tibet, embellished with many exquisite paintings and sculptures, and set in the midst of a lovely landscape. Within the Tibetan community in exile, it is considered to be of the most extraordinary temples. This is a place for everyone to practice his/her own faith without distractions and it is hoped that you will experience peace here with bliss of holy relics.

The official name for the temple at Namdroling Monastery is Padmasambhava Buddhist Vihara. This is what is written in English and Kanada above the front doors. However, since the beginning it has become popularly known as the Golden Temple.

In 1999, as requested by H.H Penor Rinpoche, His Holiness the Dalai Lama, along with the cooperation of the Minister of Karnataka state; IJP Dharma Pala Negi, the representative of the Karnataka Government; and other senior officials conducted the inauguration of the temple in the midst of a large gathering. The news of inauguration was broadcast on many local newspapers using the name the “Golden Temple”. After that many different tourist guidebooks gave the name of the temple as the Golden Temple. Nowadays all the visitors when they reach this area ask for the Golden Temple rather than its real name, the Padmasambhava Buddhist Vihara. Moreover, many tourists face the problem of losing their way. In order to remedy these situations, Namdroling official provided a sign board of the map of the whole Monastery at the entrance.

Each year, tourists reach a number of 48,000. Each day one to two hundred of tourist from different parts of world and country visit the Golden Temple. It is a place for everyone to visit and meditate and practice without any hesitation or objections from other people. It is called the realm of peace, love, and happiness. And it is considered as their abode where true meaning of life can be found.