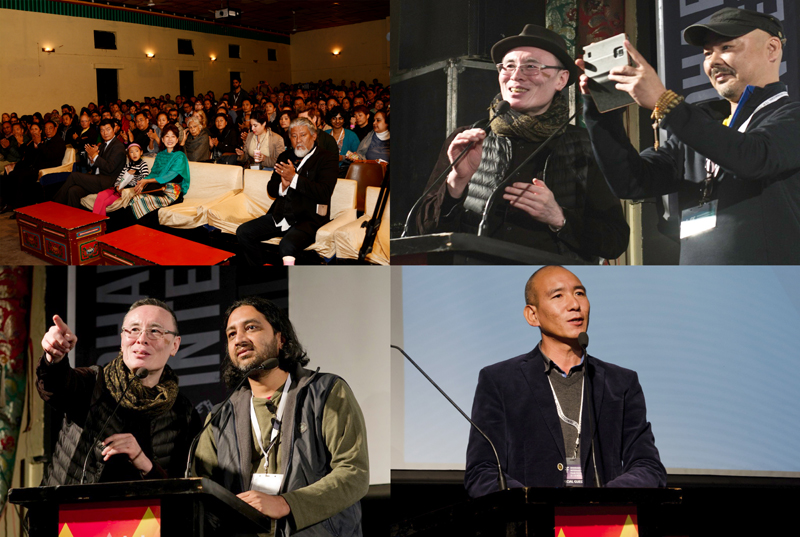 Dharamshala — True to their annual promise, DIFF brought to the mountains, the choicest of talent yet again in 2015. The festival that lasted 4 days starting 5th November, provided a platform to budding filmmakers whilst the presence of established and experienced members of the industry.

Day 2 marked the premiere of 3 short films in India -Hu Wei's Oscar nominated Butter Lamp, Tashi and the Monk by Andrew Hinton and Lo Sum Choe Sum. In the question answer round that followed, LobsangPhuntsok, the protagonist of Tashi and the Monk, attended to audiences' queries.

"The Monk was very powerful and character driven. The portrayal of the turbulences their lives encounter despite the Zen exterior, was quite insightful." said one of the attendees.
Later, a discussion titled 'The New Indian Indiewave', was moderated by Aseem Chhabra andhad the likes of Ruchika Oberoi, Kanu Behl, Gurvinder Singh, Abhay Kumar, and Bhaskar Hazarika on the Panel. These indie filmmakers have in the past, by their work and initiatives defined the contemporary lateral of Indian cinema.The panel brought under scrutiny- the new wave of Indie films, Indian contribution to it and their competence.
The closing film, Prashant Nair's Umrika (Winner of the Audience Award at the Sundance Film Festival)was presented alongwith film producer, Swati Shetty and actor PrateikBabbar.

"Umrika, reveals the struggle of a family after migration to America, it is relatable" said Nair, while interacting with the audience referencing to the parts which were drawn on his experiences. "Such discussions reveal what goes into the making of the movie and the intent of the makers. The beauty of independent cinema is spotting the charm in the ordinary aspects of life", said a member of the audience.

On 7th November 2015, a specially curated children's package and Indian shorts was showcased. Film curator Monica Wahi custom-made a package of children's films for DIFF 2015's special programme, Reel Neverland. Among the movies that were screened, Astrid Bussink'sGiovanni and the Water Ballet, and Alê Abreu's animation, The Boy and The World gained wide approval.

The Club House venue hosted screenings of the Indian shorts selection, curated by Marathi independent filmmaker, UmeshVinayak Kulkarni. The 3rd day saw a deliberation on Women and their role in the Film Industry-'Film and the Female Gaze', presided over by panelists, 4 women filmmakers: AnkaSchmid (Switzerland), DechenRoder (Bhutan), TalyaLavie (Israel), and Ruchika Oberoi (India). The discussion was moderated by DIFF Director and filmmaker, Ritu Sarin.

A session, later during the day, on 'Making Masaan' moderated by Namrata Joshi, featured director Neeraj Ghaywan and screenwriter Varun Grover. They engaged the audience in a freewheeling discussion about the making ofMasaan as a reflection of a society subjected to rapid change and the struggle of people to cope. Swiss director, Dodo Hunziker premiered his documentary, Tibetan Warrior, along with the film's main protagonist, LotenNamling, in India. The attendees included dignitaries and ministers from the Tibetan administration, including the Ministers for Home, Finance, Religion and Culture, Education, in addition to the Sikyong Lobsang Sangay. The president of the Tibetan Youth Congress and the private secretary of His Holiness the Dalai Lama, Tenzin Taklha also showed support with the members of the industry, by marking their presence.

The festival came to a close with an evening adorned with two of India's most acclaimed independent films: Island City (director-Ruchika Oberoi) and Chauthi Koot, (director-Gurvinder Singh). The closing night film for DIFF 2015 was NeerajGhaywan's feature, Masaan.

With the concluding ceremony, DIFF successfully hosted yet another film festival, having honored the industry and its custodians, laboring to put indie-cinema on the same pedestal as conventional cinema.

On being asked about his journey with DIFF as a volunteer, Sushant Bhat said, "I am a media student and DIFF was where I attained unparalleled knowledge over the span of this festival. While editing I understood the know-how of production with guidance from experts from the Industry who just like me, were volunteering for the love of films! On attending the panel discussions, I was made privy to how the makers themselves wanted the movie to be received. The atmosphere definitely made movie-bugs gravitate towards DIFF and as a student of this field, I couldn't have asked for a more wholesome experience."