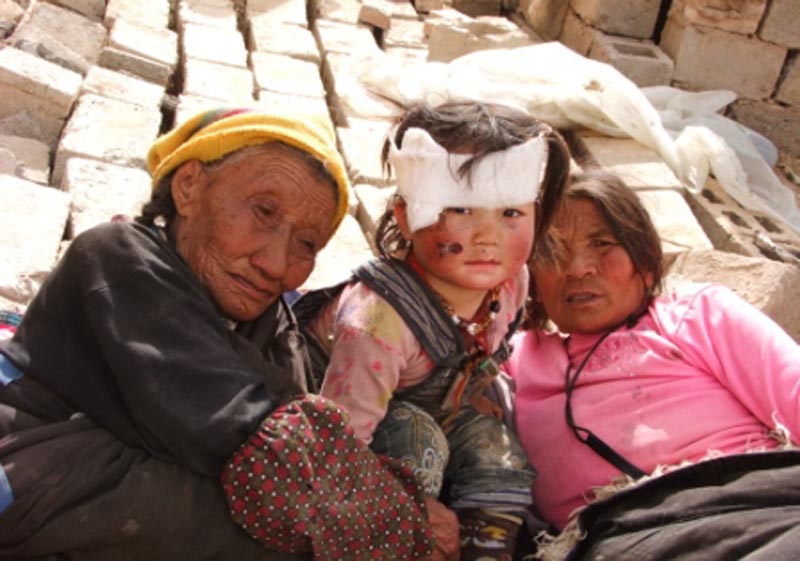 Dharamshala: In the wake of the disastrous earthquake that struck Kyegudo in eastern Tibet - leaving more than 2,000 dead, 10,000 injured and hundreds of thousands homeless - on April 14 this year, the Tibetan Women's Association (TWA) and its 52 regional chapters have raised one million rupees (Rs. 1,000,000) for the quake survivors. Yesterday (28 April 2010), on the auspicious occasion of the 15th day of the month, the funds have been dispatched via the Yushu Earthquake Relief Fund of Tibet Foundation based in the United Kingdom. The donation is the largest TWA has ever contributed in its 51-year history, and includes 20 percent of the April salaries of Central TWA's executive members and staff.

Reports coming out of Tibet highlight the lack of food and water available to survivors of the earthquake, who are living off instant noodles and packaged/tinned food. The TWA's donation strives for immediate provision of clean drinking water and nutritious food for women and children, which they believe are the most vulnerable groups. It is estimated that 65 percent of the surviving population are women and children, including 1,500 orphans - most of whom are now homeless due to the destruction of 85 percent of homes in Kyegudo.

TWA's main priority is to ensure that the funds it has raised reach the people who need it most. It is only through a careful study of several worthy aid organizations both in and outside Tibet engaged in relief operations in Kyegudo, and by consulting many responsible individuals -both Tibetans and non-Tibetans - regarding the best channel to forward the donations collected, that the TWA has decided to send the funds through the Tibet Foundation.

TWA arrived at the above decision mainly because Tibet Foundation is a legitimate UK registered charity (292400) with over 25 years of experience in successfully running aid projects in Asia; including relief work during natural disasters in Tibetan inhabited areas such as the snow-storm disaster in Sershul, East Tibet (Sichuan, 1995), the landslide disaster in Yushu, East Tibet (Qinghai, 2007) and the earthquake in Aba (Sichuan, 2008. Tibet Foundation works with close cooperation with the local people as well as Government authorities at various levels of administration.

They have specifically asked the donations to be used solely for humanitarian purposes, particularly in areas of health and poverty relief projects for the victims of the recent earthquake. The Tibet Foundation Yushu Earthquake Committee will implement disaster relief work based on need assessments carried out by their field officers, thereby ensuring utilization of established procedures for transparent monitoring and evaluation of project works.

According to Dolkar Lhamo Kirti, acting TWA President, "The post earthquake relief efforts and the expression of solidarity and support from Tibetans, both inside and outside of Tibet, have been truly inspiring. TWA and its chapters will continue to raise funds and donate through the Yushu Earthquake Relief Committee, as the resettlement and rehabilitation work inside Kyegudo will last for a couple of years. TWA will strive hard to contribute in any possible way to strengthen the spirit of the earthquake survivors and to rebuild the beautiful town of Kyegudo."

TWA also sends an earnest appeal to the Chinese Government to acknowledge the wishes of the Tibetan people, particularly the survivors of the Kyegudo earthquake, who are clinging on to the hope of a possible visit by His Holiness the Dalai Lama. He Himself has expressed a strong intention to visit the ravaged area.

The Tibetan Women's Association (TWA) has 52 regional chapters and over 15, 000 members outside Tibet. Today, TWA is the second largest Tibetan NGO and the only women's NGO in exile that advocates human rights for Tibetan women in Tibet and works to empower Tibetan women in exile, in particular new refugee women from Tibet.

According to the exiled group, TWA's motto is ‘Advocacy for home, Action in exile.'