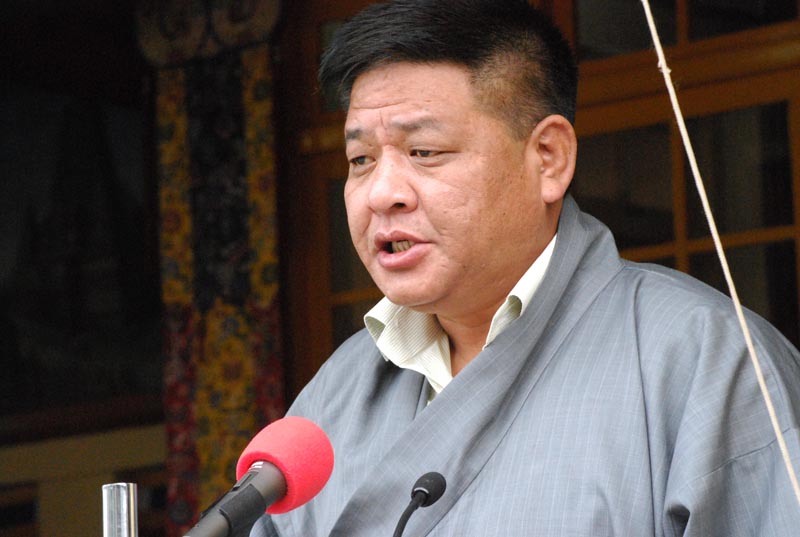 Dharamshala: While paying obeisance to His Holiness the Dalai Lama, the Spiritual and Temporal Leader of the Tibetan people and the Supreme Leader of World Peace for His august presence, I would like to convey the Tibetan Parliament-in-Exile's greetings to the Venerated Sangha, Former and Serving Dignitaries of the three organs of the Tibetan Government-in-Exile and the Autonomous Bodies, Former and Serving of the Tibetan Government officials, President of Dharamsala Local Tibetan Assembly and Representative of Tibetan Welfare Office, President of Dharamsala Tibetan Freedom movement, Leaders and staffs of the Non-Governmental Organizations, Teachers and Students, all the Tibetan people in and outside Tibet, all supporters of the Tibetan cause and specially our Chinese and Foreign friends who have travelled a long way to be with us here today to observe the 51st anniversary of the Tibetan National Uprising Day.

Driven by the evil designs of the Chinese communists, the Tibetan people rose up in a popular uprising against them in 1959. Since then, the Tibetan inside Tibet have had no freedom whatsoever, and this state of affairs continues even to this day. Besides their failure to take the ground realities in account, the Chinese leaders-bye adopting an arrogant and hardline approach-have pursued and are pursuing wrong policies and programmes, These are not in agreement with the basic aspirations of the Tibetan people. As a result, they have not been able to solve the problem that exists between the Tibetans and Chinese authorities for the past 51 years. All these years the issue of Tibet has, however, continued to remain on the international stage as an important issue that needs to be resolved. Moreover, it has become an issue that cannot be wished away by the Chinese government. This is due mainly to His Holiness the Dalai Lama's meritorious services throughout the world, and the courage and determination of the Tibetans inside Tibet as well as the amount of support that we have been receiving form the governments and individuals globally. I would like to take this opportunity to express our deep sense of gratitude and thanks to His Holiness the Dalai Lama, the Tibetan People inside Tibet and our international supporters. As per the resolution adopted by the Tibetan Parliament-in Exile last year, a memorial stone in honour of all those heroic men and women inside Tibet has been recently erected.

Even though His Holiness the Dalai Lama and the Exile Tibetan Administration have been making sincere and great efforts, the Sino-Tibetan problem remains unresolved to this day, This is due to lack of political will on the part of the Chinese leaders and also due to their arrogant and hardline attitude rising from a sense that in today's global political situation virtually no powerful nation of the world can function in any field without appeasing China-be it in politics, economy, environment, or security. This is particularly clear when we see that there are some Chinese leaders who believe that the issue of Tibet will cease to exist once His Holiness the Dalai Lama is no loner there and that the Tibetan voices can be suppressed by brute force.
On the basis of our experiences during the nine rounds of talks so far, the present Chinese leadership is trying to fool not only the Tibetans but also to confuse Chinese people and to deceive international community with their contradictory statements. It has become clear that their only aim is to postpone and no have the real desire to resolve the Sino-Tibetan issue. This is clear from the fact that on one hand they engage in talks with envoys of His Holiness the Dali Lama about the Tibetan issue and on the other hand they say that His Holiness does not legitimately represent the Tibetans. There have been nice rounds of talks in the past eight years during which issues concerning the form and status of autonomy for the welfare of Tibet and the Tibetans were discussed. In accordance with their suggestions the envoys of His Holiness presented the Memorandum on Genuine Autonomy for the Tibetan People. The contents of the Memorandum were rejected in totality at that time and they announced that during the ninth round of talk the envoys did neither revised nor made any concession on the Memorandum. This is stranger knowing clearly from the widespread peaceful protest in 2008 how much respect and veneration the Tibetans have for His Holiness both historically and in reality. In truth they say these only because of their inability to bear His Holiness' fame and achievements and not because they have the confidence and pride to hold a plebiscite for Tibetans inside Tibetan monitored by a third party.

His Holiness has stated many times on various platforms, both in India and around the world, that he is not seeking independence. It is particularly mentioned clearly in the Memorandum on Genuine Autonomy for the Tibetan People that the genuine autonomy should be achieved within the framework of the constitution of the People's Republic of China. Although the Chinese leadership has acknowledge that His Holiness' stand is "welcome news" during the fourth round of talks, to this day they claim that His Holiness is a separatist. Such contradictory talks are solely to confuse the Chinese people and nothing else.

Though there is a wide gap between the Chinese Government and Central Tibetan Administration's outlook on the real situation inside Tibet, the demand to have a common investigation into the real situation is left unanswered by the Chinese. We welcome the uniform policy and program to be carried out in whole of Tibet to develop the economy after the so-called Fifth Work Forum on Tibet was held. However, Tibetans are being made to build new houses irrespective of their wishes. Such actions are simply aimed to increase demands for Chinese goods when the demands are going down due to global recession. If the programmes are meant to benefit the Tibetans then apart from building houses, they should clearly identify the aspirations of the Tibetan people. And then improvement should be made in the fields of education, health and environmental protection in Tibet. Particularly, Tibetans must be given the freedom of thoughts and promote opportunities to develop Tibet's unique culture, religion, language and to engage in Buddhist studies. Likewise, developmental projects in Tibet must suit the aspirations of the Tibetans and to develop human resources so that Tibetans are able to carry out these projects by themselves.

It is unfortunate that even today even a slight, the Tibetan people inside Tibet who exercise their human rights to peacefully express their views and dislike of the Government are made to suffer suppression, imprisonment and other inhuman treatments. Some even face execution. The Chinese leadership should clearly recognize that if this situation persists then it is impossible to have cordial Sino-Tibet relationship. We urge Chinese Government to immediately release all political prisoners who are undergoing suffering in Chinese prison and those already sentenced.

As His Holiness the Dalai Lama always states, the purpose of our meeting with justice-loving people from other countries is because the Chinese leadership has not properly responded to our overtures. If the Chinese Government had accepted and responded properly to the mutually beneficial Memorandum forwarded to them, then we have no reason to appeal to them. The Chinese Government tries to prevent His Holiness the Dalai Lama from meeting with the world leaders and if at all such meetings take place then they are vehemently criticized. Such behaviors are not only childish but also very unbecoming of a powerful country. Therefore, if the Chinese leadership is able to resolve Sino-Tibet problem by recognizing the mutually beneficial approach and in accordance with the ground realities, then it will benefit both China and Tibet and improve relations between the two peoples.

Tibetans in Tibet demonstrates their sincerity and heroism in a very intelligent manner. Therefore, we urge Tibetans in exile to be more determined and sincere and to our international friends to continue their support to us. In essence, as per the wishes of His Holiness, we must unitedly work hard towards a productive outcome.

Today we have some Chinese friends including democracy activist present here with us today to commemorate the Tibetan people peaceful uprising day of March 10. We like to thank their offering of a souvenir with "Path to freedom of the Tibetan people" inscribe on it to the exile Tibetan Government as a symbol of their solidarity with the Tibetan people.
To conclude, we pray for the long life of His Holiness the Dalai Lama and for the reunion of Tibetans inside and outside Tibet
Tibetan Parliament-in-Exile
10 March 2010