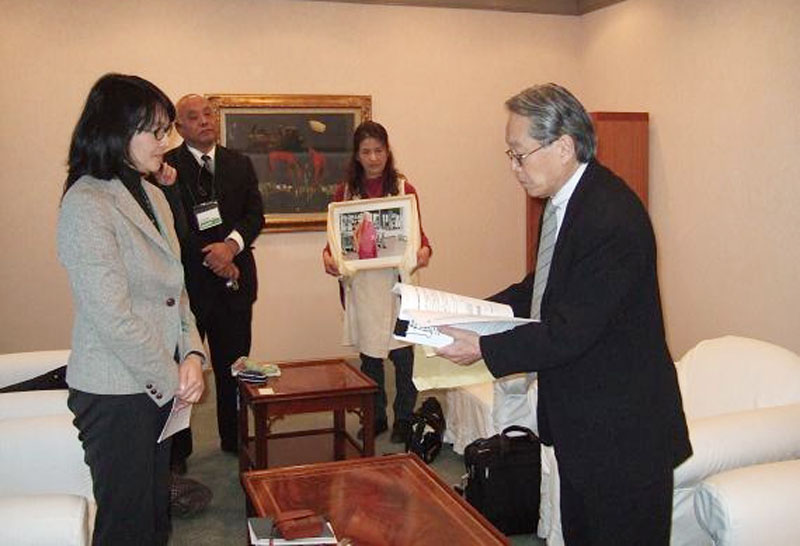 Tokyo: Responding to the biased "Tibet exhibition" organized by the Chinese government in Tokyo, representatives of three major Tibet Support groups in Japan visited the office of Tokyo Ueno Mori Museum on 24 December to file a petition signed by some six hundreds Japanese.

Tokyo: Responding to the biased "Tibet exhibition" organized by the Chinese government in Tokyo, representatives of three major Tibet Support groups in Japan visited the office of Tokyo Ueno Mori Museum on 24 December to file a petition signed by some six hundreds Japanese.

The director and his assistant received the petition. The content on the petition urged the organizers of the exhibition, "Tibet - Treasure from the Roof of the World", held at the museum should not to become propaganda tools for Chinese government.

The Tibetan exhibition was held in Japan's major cities under the aegis of Chinese government in collaboration with Japanese museums, media and business establishments. It started in Tokyo in the month of September, since then the exhibition was confronted with protests and demonstrations from Tibet supporters on various scales.

Japanese supporters protested that the exhibition displays the Chinese side of the Tibetan history and culture. It showed the Chinese government as a benevolent protector of Tibetans' religion and culture. The petition says some 1.2 million Tibetan died and around 6,000 monasteries were destroyed because of Chinese occupation of Tibet. In light of these facts, it is unfortunate and unbecoming of Japanese museum and business sectors to collaborate with the Chinese regime in trying to justify the Chinese rule and oppression in Tibet.

The representatives of the support groups met Mr. Mizuno Seichi, the director of the museum, and presented the petition signed by 600 people and requested him to study the feeling of Japanese public concerning the exhibition.

On being asked for his explanation, Mr. Mizuno said, "We are aware of disturbances in Lhasa and Uighur, so we are careful about such things. We have received many complaints and protest letters, but as a museum, it is our work to display the goods of artistic value. In this case, Tibetan Buddhist arts are great and we want to show these to our people. If there are demand for arts of minorities like Tibet, Mongols and Uighur, we would do it, and even China cannot object to this. I can't say all the museums around the world have war booties, exhibition is done to show whose and when aspects of the arts."

The supporters explained the organizers about the misleading aspects of the exhibition. The representatives said if the exhibition is organized with an objective to help the Tibetans, then sincere efforts need to be made to rectify the explanations at the premises, give real historical function of the Potala Palace and the events after Chinese occupation. The museum has the responsibility of telling the truth instead of covering it.

Many Japanese visitors appreciated the activities conducted by the supporters at various level to disseminate authentic information about Tibet, and to let the organizers know that Japanese public cannot be misled by the Chinese government propaganda.

The signature campaign to protest the Tibet exhibition and to enlighten the exhibition visitors was organised by Team Tibet, Non partisan Association of monks and "We Love Free Tibet" groups. Geshe Palden and a few other supporters joined to submit the petition.

-- Based on report filed by Tsewang Gyalpo Arya, Office of Tibet, Tokyo