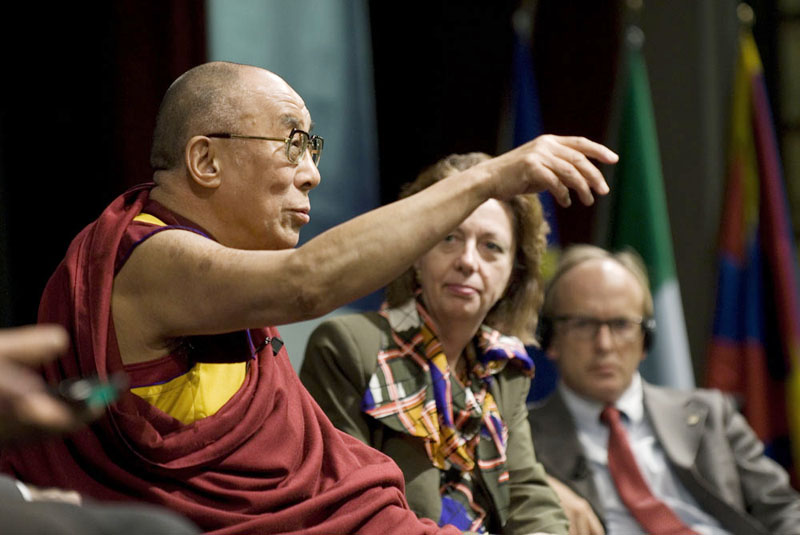 A round table conference for Tibet was held on the afternoon of 15th November in Trento, with the Presidents of the Italian Autonomous regions of Trentino and Alto Adige. Tenzin Gyatso, the 14th Dalai Lama, spiritual and political leader of the Tibetan people, winner of the Nobel Peace Prize in 1989 and an exile from his land since 1959, spoke today in Trento at the invitation of the Autonomous Province of Trento and the Italy-Tibet Association.

His Hoiness's speech concluded an international conference dedicated to various forms of regional autonomy around the world. In his stinging address, at times caustic when speaking out against the inability of China to understand Tibetan culture and spirituality, the Dalai Lama launched a strong appeal for the autonomy of Tibet—a form of autonomy that would allow Tibetans to safeguard and promote their own language and religious and secular traditions, while respecting the frontiers of the People's Republic of China and the Chinese constitution.

The President of the Autonomous Province of Trento, Lorenzo Dellai, presented the 'Trento Charter for Tibet', a document that Trentino and Alto Adige/Südtirol undertake to ask other autonomous regions around the world to sign. This supports the Tibetan cause and the Memorandum that the Tibetan government in exile recently handed over to China.

This afternoon, the Santa Chiara auditorium in Trento welcomed the Dalai Lama to Trento for the third time, following his previous visits in 2001 and 2005. He had been invited to participate at a round table concluding a conference dedicated to examining some of the most important examples of regional autonomy around the world, from Trentino and Alto Adige to Quebec, Catalonia, Scotland and the Aland islands, organized in collaboration with the University of Trento and the Accademia Europea in Bolzano.

The conference speakers also included: Luis Durnwalder, President of the Autonomous Province of Bolzano-Alto Adige/Südtirol; Bernat Joan, Secretary of Linguistic Policy at the Generalitat de Catalunya; Elisabeth Nauclér, Finnish Member of Parliament for the Aland islands; Roberto Pinter, from the Italy-Tibet Association in Trento; and Roberto Toniatti, Jurist at the University of Trento. The words of the Dalai Lama were eagerly awaited, as he was transfered from Bolzano to the provincial government building in Trento.


In his public speech and at the brief meeting held with the Trentino press and President Dellai, the Dalai Lama underlined the distance between lands such as Trentino and Alto Adige, which enjoy 'real' autonomy and have legal instruments available to safeguard their rights, and Tibet.

He stated, "While constitutional rights are truly guaranteed in Italy, this is not the case in China.

We cannot appeal to a judge or a court in order to obtain recognition for what in theory the Chinese constitution guarantees us. When I describe the situation in Tibet under Chinese dominion, I do not usually start with ideological questions. I say that we have an uninvited guest, who entered our country armed and took control of everything, a guest who tells us what to eat, how to sleep and what to dream about, a guest who affirms that he has liberated us. When we Tibetans hear this we ask ourselves: liberated from what? Tibet has a history dating back a thousand years, its own culture and spiritual traditions.

Tibetans have always had great faith in themselves and great dignity. We are a stern and proud people. In terms of cultural, linguistic and historic traditions we are on a par with the Chinese, if not ahead of them. At all events Buddhism arrived in Tibet from India, not China, while our language derives from Sanskrit, not Chinese.

The very expressions that people use to define us prove that Tibet is different from China. I am called the Dalai Lama of Tibet, not of China. People say 'Tibetan Buddhism', not 'Tibetan-Chinese'. We did not invent all this, it is part of our history and our thousand-year inheritance.

Chinese communism has been shown to be narrow-minded and its thinking limited. Initially the ideas it proposed were positive, but the result that we see today is that six million Tibetans are totally without rights."

So where to start in order to change things? For the Dalai Lama, we must start with freedom of information and the abolition of censorship.

His Holiness said that, "Many Chinese people believe that the Tibetans are ungrateful. They have been taken under the protective wing of China and they do not appreciate it.

This happens because they do not have the correct information. It is time that there is finally freedom of information in China. One billion three hundred million Chinese people have the right to know how things are. Democracy is also important, but here the question is more delicate. It is in nobody's interest to create chaos with radical change. We believe that gradual change is preferable. The problem is that our 'guest' as we have defined him, is not exactly brilliant; he only thinks about control. He believes that it is enough to provide food and give Tibetans a roof over their heads. But this is not the case: we have our own civilisation and values, we need more than something to eat and somewhere to sleep. We have a spirituality that the Chinese do not understand and fear."

So if this is the picture, there is only one solution: a form of powerful autonomy, which would allow the Tibetan civilisation not only to survive but also to be enhanced, also by making necessary changes as compared to the past, such as the introduction of the election of the political representative organs of the Tibetan exile community in Dharamsala, India, in 2001.

The speakers preceding the Dalai Lama underlined that the autonomy of Tibet could also benefit China. The logic is simple. Repression inevitably generates rebellion, whereas genuine autonomy—a form of autonomy that satisfies the needs of the minority requesting it—represents protection from the danger of violent secession for the nation that grants it. Examples such as Scotland and Quebec, but also Trentino and Alto Adige/Sudtirol demonstrate this.

These autonomous regions, as the President of the Autonomous Province of Trento, Lorenzo Dellai declared in his speech, know that today they have an even greater responsibility as regards peoples such as the Tibetans, as a result of what they have succeeded in achieving over the years.

According to Dellai, "We in Trentino suffered when we were an Italian minority within the Austro-Hungarian Empire, while the South Tyrol suffered even more when they found themselves to be a German minority under Italy during the fascist period.

After the Second World War we finally obtained the extensive autonomy that today has taken on a wider trans-frontier dimension, within the context of a region straddling Italy and Austria in the heart of a united Europe. Encouraged by this awareness, we wish to make a concrete contribution to the cause of the Tibetan people; for this reason we have passed what we have called the 'Trento Charter', a document supporting the autonomy of Tibet, which we will be asking other autonomous regions within Europe and around the world to sign in the next few weeks, because we are convinced that it is not only nations that count at international level, but also regions, while the communities that live in them can and must make themselves heard."

The Province of Trentino has also recently invited His Holiness the Dalai Lama, Tibetan Prime Minister Samdhong Rinpoche, Tibetan Parliamentarians and international scholars to a two-day conference on autonomy.

Report filed by Dekyi Dolka on the behalf of Mr Roberto Pinter member of Trentino Regional Parliament, the official organizer of the event.