Details
By: Mail, Friends of Tibet, 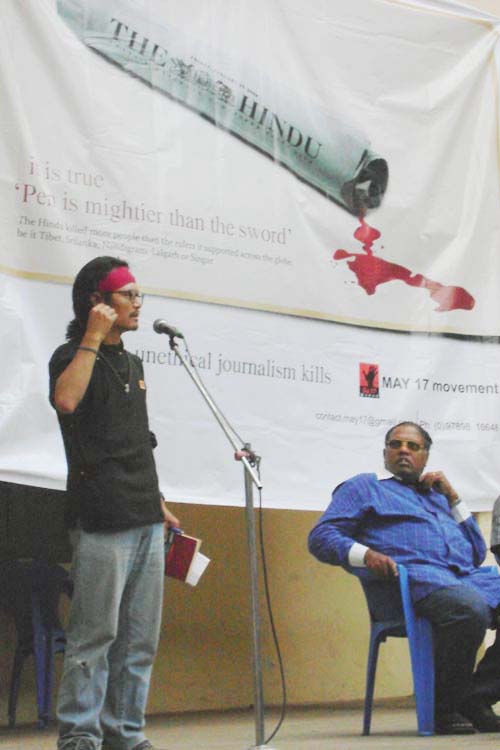 Thiruja, a young consultant for an advertising agency, gathered a large number of Tamils and Tibetans yesterday to protest the continued publishing of biased and prejudiced reports by the Hindu. Thiruja managed to bring into this alliance famous Tibetan poet and activist Tenzin Tsundue, from Dharamshala, who represented the Bylakuppe chapter of TYC and TWA as well as Friends of Tibet.

"This is a unique gathering here" said Tsundue, who spoke a bit in Tamil before switching to English. The Tibetan writer stated, "The Hindu's politics is only a symptom. The larger issue is the coming of Chinese influence in the Indian space, and the creation of the Chinese hegemonic cordon around the Indian subcontinent, like the growing Chinese influence in Burma, Nepal, Bangladesh, Sri Lanka and of course, Pakistan."

Tsundu went on to explain how the cause of Tibetan independence is directly related to India's security in the face of growing Chinese influence in the world and the Chinese threat to India.

Former navy commander Mr Subramanium expressed declared that, "China is a failed ‘union'
of occupied countries and contradictions. There is no future in this state. The state is already rotting and it will soon come crumbling down."

The gathering passed a resolution where they said "since the Hindu is biased and prejudiced towards freedom struggles, we declare the Hindu to be anti-Tamil, anti-India and anti-freedom."

In addition to the fiery speeches, the meeting offered many books to buy or take for free. The Tibetan students displayed an impressive photo exhibition that portrayed the suffering of Tibetans under Chinese control. Friends of Tibet's Indian supporters, including Mr. Hubert and Anto V, attended, as did Aasha Reddy, who is acknowledged as the local guardian of the 200-odd Tibetan students studying and working in this south Indian coastal city.

Friends of Tibet is involved in a long-term campaign called ‘Save the Hindu' (www.friendsoftibet.org/save/) to reform the bias of The Hindu, one of India's oldest national newspapers. According to this India-based Tibet support group, the Hindu carries reports from Chinese news agencies Xinhua and the People's Daily, but refuses to include any Tibetan voice in their reports.
. . . . .
Friends of Tibet, PO Box: 16674, Bombay 400050, India.
. . . . .
Friends of Tibet is a people's movement to keep alive the issue of Tibet through direct action. Our activities are aimed at ending China's occupation of Tibet and the suffering of the Tibetan people.

Friends of Tibet supports the continued struggle of the Tibetan people for independence. Friends of Tibet is also one of the principal organisers of World Tibet Day around the world.