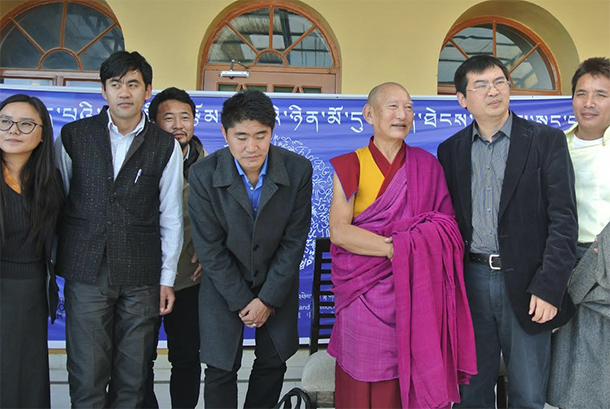 Dharamshala: - "China lags far behind the Western world in both scientific and creative achievement," Chang Ping, Chinese writer, journalist and columnist said, adding: "Why is this so? China's leaders fail to grasp the holistic nature of human thought and creativity."

According to their press release, two Tibetan groups based in Dharamshala 'TCHRD' and 'Tibetan PEN' jointly held an event on 15 November to highlight the fate of Tibetan writers imprisoned by Chinese authorities.

The day marked the 33rd anniversary of the PEN International's Day of the Imprisoned Writer. The 150 PEN Writers Associations throughout the world commemorate the day by organising events, including seminars, to highlight the fate of imprisoned writers.

The event took place at Peace Hall of Kirti Monastery in Dharamshala, India and was attended by chief guest Kirti Rinpoche and special guest Chang Ping, a noted Chinese writer, journalist and columnist.

During a prepared speech titled "How Many Words Have Been Spoken?" Chang said China is being held back by the government's policies on freedom of speech, "The Chinese authorities keep assuring the nation's scientists, writers, and artists that they can do anything they want as long as they don't touch any politically sensitive issues.

"As long as you put your energy into producing good research, painting good pictures, and writing good books, you will be successful. Yet it is plain for all to see that China lags far behind the Western world in both scientific and creative achievement. Why is this so? China's leaders fail to grasp the holistic nature of human thought and creativity. It is impossible to stifle political debate without stifling all other forms of communication and learning," he said.

Chang concluded his speech by talking about writers who have been incarcerated, he said that while they may not have the means to write, "They have spoken more than anybody else and their words will follow them for life.

"They will always be forever closer to home for having told their stories. Today, we will amplify the voices of "those who have spoken." We will distribute their writings near and far and bring a sense of home to all those living in exile,"

His Eminence Kirti Rinpoche spoke about the importance of Tibetan language and literature in reflecting the reality of the situation in Tibet. He also said Tibetans hold no grudges against the Chinese people and they oppose the 'you die, I live' Chinese policy which seeks to annihilate the existence of Tibetan culture and language.

The event saw the release of two publications by TCHRD. The first, a collection of essays by imprisoned Tibetan writers inside Tibet in Chinese translation titled "Who are the Real Splittists?" and the second, a report on China's forced resettlement of Tibetan nomads.

In the first book, Jigme Guri sheds light on the current situation in Tibet, based on his personal diaries and interviews with journalists. The book was banned from publication in Tibet for having "negative political content." He was recently sentenced after years of detention to five years in prison.

Jado Rinchen, author of the second book is currently suffering from severe physical and mental disability after he was brutally beaten and tortured in prison. He was arrested and imprisoned for writing a book that documented the real situation of Tibet under the Chinese rule. The Chinese police seized most of his compositions, but the remaining few that survived, including his important work "The Unforgettable Red Fire" could not be printed and distributed inside Tibet. The book released at the event under revised title, "The Power of Justice".