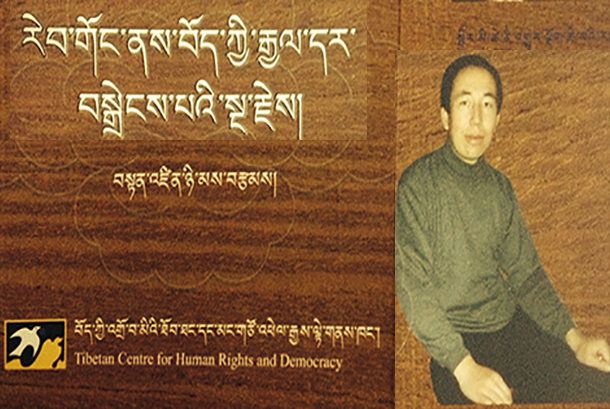 Dharamshala: - The exiled Tibetan human rights organization based in Dharamshala on Wednesday, 13 August released a memoir of a former Tibetan political prisoner in Tibetan titled "Raising the Tibetan National Flag in Rebkong".

'The memoir, authored by Tenzin Nyima, is a personal account of his peaceful protest against the Chinese government by raising the banned Tibetan National Flag in his hometown of Rebkong in Tibetan province of Amdo and the subsequent arrest and torture he suffered at the hands of Chinese security forces,' the Tibetan Centre for Human Rights and Democracy (TCHRD) said in a press release issued on 13 August.

'Unable to bear the constant harassment of Chinese police after his release from prison, Tenzin Nyima escaped into exile in India in 1997,' the Tibetan rights group said.

According to TCHRD, the book also describes in vivid detail the trials and tribulations the author had to overcome while fleeing Tibet through Nepal and finally reaching India, where he had his most cherished dream fulfilled: a private audience with His Holiness the Dalai Lama. This meeting with the Tibetan spiritual leader, who advised him to write his experience of life under Chinese rule, is captured moving prose in the book.

"Since the Tibetan uprising in 2008, Chinese government has subjected Tibetans inside Tibet to repressive political, economic and religious persecution. Fundamental human rights of the Tibetan people such as freedom of speech, assembly, religion, and travel have been trampled upon with impunity. Moreover, in the name of 'patriotic education' and 'legal education', Tibetans are being forced to denounce their faith in His Holiness the Dalai Lama," the press release read.

As reflected in the book, despite overwhelming Chinese military might, Tibetans in Tibet are not just passive onlookers enduring persecution in silence; they have been resisting, within the limited space, repressive policies that struck at the core of their most fundamental belief systems. Apart from occasional street protests, one example, as recalled by the author in this book, is the refusal to fly the red-starred Chinese National flag on the rooftops of their buildings.

As a human rights organization dedicated to protecting and promoting the rights and dignity of the Tibetan people, Tsering Tsomo, Executive Director for the group said TCHRD is proud to associate with the struggle of ordinary Tibetans like Tenzin Nyima, who risk their lives to secure Tibetan people's legitimate rights to determine their own future.

She said TCHRD 'hopes that this book will serve as another powerful testimony of the Tibetan people's resistance, resilience and inextinguishable hope for freedom and dignity.'

In the introduction of the book, author Tenzin Nyima states his motivation for writing the book:

"As a Tibetan Buddhist, I believe life is inherently transient and impermanent - subject to constant changes. Due to our karmic fate, we are bound to encounter suffering in life, including repression and violence.

It was my unfortunate fate to leave behind my beloved aged parents, siblings, teachers, fellow spiritual brothers and friends in Tibet, as I arrived as a refugee in India on 18 June 1997.

I find it extremely important for each one of us to record our struggles and suffering at a time when Tibetans are going through one of the most difficult periods in our history. This urgent desire to record my experience in words has led me to write this account."

Tenzin Nyima currently lives in France. For now, the memoir is available only in Tibetan and in hard copies.