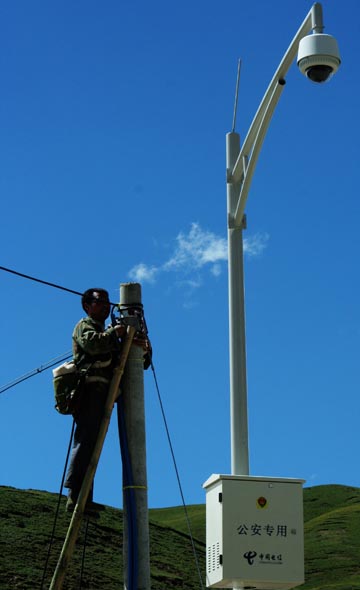 Paris: Two new Tibetan websites that are hosted on servers within China have been inaccessible for the past month in most of China including Tibet. The two sites, Tibettl (http://www.tibettl.com/) and ChodMe (http://www.cmbpd.cn/index.html), specialize in Tibetan culture and Tibettl hosts the blog of popular writer Jamyang Kyi.

Paris: Two new Tibetan websites that are hosted on servers within China have been inaccessible for the past month in most of China including Tibet. The two sites, Tibettl (http://www.tibettl.com/) and ChodMe (http://www.cmbpd.cn/index.html), specialize in Tibetan culture and Tibettl hosts the blog of popular writer Jamyang Kyi.

Their blocking has coincided with others signs of the vice being tightened on Internet users in Tibet. A young man, Pasang Norbu, was arrested by the Chinese authorities in Lhasa on 12 August for looking the Radio Free Asia (http://www.rfa.org/english/) website and allegedly violating public security laws that ban viewing photos of the Dalai Lama or Tibetan national flag or reading articles promoting Tibetan autonomy.

“We condemn such online censorship methods, which do not hide their aim of stifling any independent expression of Tibetan culture,” Reporters Without Borders said. “We call for an end to government harassment of Tibetan website editors and an end to censorship of online news and artistic expression.”

In yet another example of China’s constant reinforcement of its control over the Internet, anyone wanting to post a comment on a news website has been required since the start of August to register first using their real identity.

Websites hosted in China have to post instructions to this effect. If the instructions are not respected within a deadline set by the State Council’s Information Office, the site is blocked and visitors find the message, “Sorry, this site is currently down for maintenance.” The webmasters themselves have to block the site to ensure its long-term survival, just as they have to suppress articles banned by the government.

In a parallel move, the culture ministry announced on its website on 3 September (http://www.ccnt.gov.cn/xxfb/xwzx/whxw/200909/t20090903_73041.html) that Chinese online music distributors such as Yahoo China, Baidu and Google (which has just launched a downloading service) will have to submit all imported music to the ministry for vetting. This is necessary to protect “intellectual property rights” and ensure that lyrics are “acceptable,” the ministry said.

The Google.com website is meanwhile accessible again in China. Criticized by the authorities for not doing enough to combat pornography, the California-based company has eliminated part of its content.

China is the world’s biggest prison for cyber-dissidents with a total of 57 currently held, five of them Tibetans. It was ranked 167th out of 173 countries in the 2008 Reporters Without Borders press freedom index.