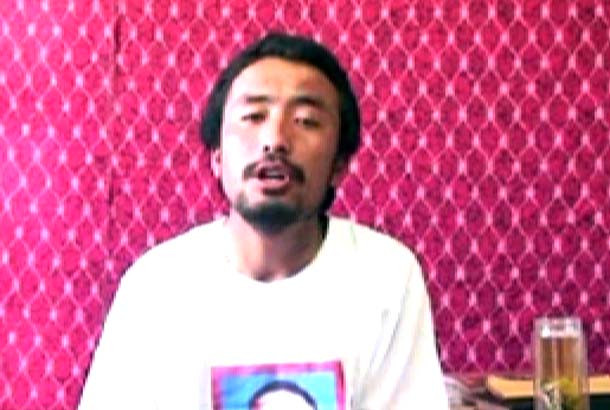 Dharamshala: 28-August 2009 The Tibetan Centre for Human Rights and Democracy (TCHRD) is organizing a press conference at Lhakpa Tsering Hall, Department of Information and International Relations (DIIR), to display videotapes recently received from Tibet that appeal to members of the international community to act swiftly on behalf of the Tibetan people.

Kalsang Tsultrim, pseudonym Gyitsang Takmig, is a monk from the Gyitsang Gaden Choekorling Monastery in Sangchu County, Kanlho, of the Tibetan Autonomous Prefecture in Gansu Province, one of the main sites of last year’s March protests. Kalsang Tsultrim undertook great personal risk in recording and distributing this video, which gives a detailed account of Tibetan history since the Dalai Lama’s 1959 flight into exile, including the lack of human rights in Tibet and the suffering of the Tibetan people, as well as their struggles and aspirations. The hour-long video testimony was recorded on 18 July 2009 and widely distributed in Tibetan areas in Gansu, Qinghai and Sichuan Province. Kalsang is also the author of a book, several essays, and poems.

The source who delivered the video told the Centre that Kalsang’s intention in filming and distributing this video is “to educate primarily the illiterates and general Tibetan public who are fed with a daily dose of government-sponsored propaganda, revealing the true history of the Tibetan struggle for freedom, the Dalai Lama’s call for genuine autonomy through the Middle Way approach, and the human rights situation in Tibet.” He stated that the filmmaker also “dealt at length with the Tibetan people’s hope and aspiration for the Dalai Lama’s return to his rightful place.”

Kalsang’s video touches on many recent events in Tibet. This includes the Chinese government “development” policies that have led to the displacement of many Tibetan nomads, completely altering their traditional way of life, further marginalizing the Tibetan people, and allowing Chinese companies to extract Tibet’s natural resources and harm the environment. He also describes a recent farmers’ boycott movement in Tibet, the self-immolation bid by Lobsang Tashi a.k.a Tapey of Kirti Monastery, the suicide of a monk in Ragya Monastery, and the arbitrary arrest and detention of thousands of Tibetans concerning the March 2008 protests.

The video message also appeals to the United Nations and members of the international community, invoking a moral obligation to speak on behalf of the Tibetan people inside Tibet, who are living under severe repression and constant fear.

Kalsang derides the National Regional Autonomy built into the Chinese constitution—a law which on paper guarantees the fundamental rights of minorities, including Tibetans. He states, “In reality it is a completely different scenario where our fundamental rights are not being respected at all. Tibet is governed as just another territory or region in the People’s Republic of China, but nothing is done to build the harmonious society that the government promises.”

He further explains, “We do not have freedom of religion and politics because most of the religious and political websites are full of propaganda that distorts the situation. We do not hate the Chinese, but we respect truth and justice. We were protesting against Chinese rule because the local authorities are not acting according to China’s Constitution and autonomy laws…We will never give up our fight for freedom and truth until Chinese policies change regarding the implementation of the Constitution.”

The Tibetan Centre for Human Rights and Democracy (TCHRD) considers the video message and point of view conveyed by Kalsang Tsultrim purely as an exercise of the fundamental right to free expression enshrined in the Chinese constitution, and the major international covenants that China is party to. The Centre believes that the message and views conveyed by Kalsang are shared by many people inside Tibet. Kalsang’s protest indicates the great repression and widespread human rights violations inside Tibet. His initiative to risk his own life exposing this reality demonstrates the deep helplessness that pushes the Tibetan people’s endurance to the very edge of human capacity.