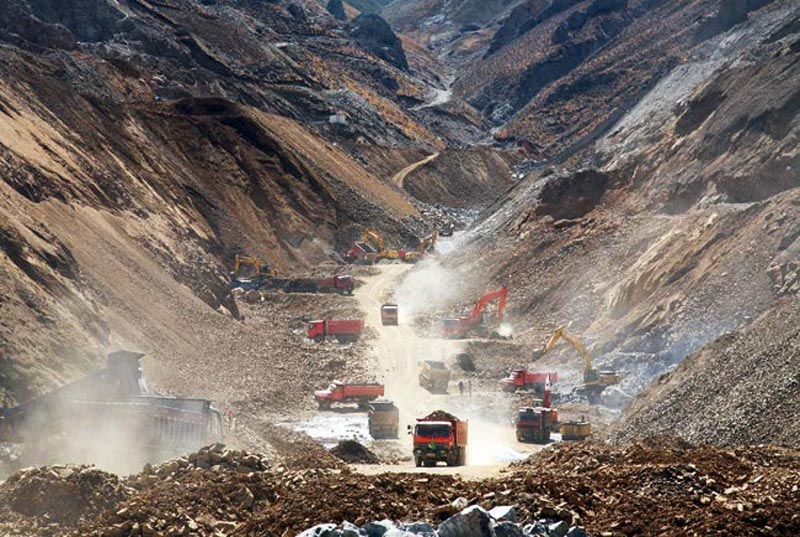 Dharamshala: - The tragic incident of landslide could be a result of the aggressive expansion and large-scale exploitation of mineral in the Gyama Valley of central Tibet.

On Friday, 30 March 2013, China's official media reported that 83 miners including two Tibetans have been buried after a major landslide hit a part of the Gyama (Ch: Jiama) Copper Gold Polymetallic Mine. So far, the rescue efforts have failed to find any survivors or bodies and the chances of survival for those buried are getting slim. This is a sad and unfortunate incident that resulted in large number of casualties that could be higher than reported. Environment and Development Desk (EDD) fear that this tragic incident could be a result of the aggressive expansion and large-scale exploitation of mineral in the Gyama Valley—a man-made phenomenon rather than just a 'natural disaster'.

Gyama mine is located in Medrogungkar (Ch: Maizhokunggar) County of the so-called Tibet Autonomous Region, about 68 kms from Lhasa. It is a large scale polymetallic deposit consisting of copper, molybdenum, gold, silver, lead and zinc with the potential to become the China's biggest copper producer in 10 years. The Gyama Mine has been selected as a "pilot of the national green mines project" by Ministry of Land and Resources (PRC) in 2012 and also a "Model enterprises of national unity and progress". As a requirement, Gyama mine must meet higher standard of technology oriented and corporate responsibility-oriented laws with adherence to policies of "people first" and "safe production", promote "harmony between the mine and the community and shoulder the responsibility of social welfare".

However in the past decade, Gyama mine has been a major failure in terms of the social harmony and environmental protection in the area. Before it was consolidated under a one umbrella in 2007, the Gyama Mine consisted of four small mines which has been causing pollution, land degradation, harm to livestock etc. After the consolidation, large-scale and heavy mechanized operations accelerated the ongoing environmental and social problems. There has been rapid expansion of the mining operation which covers a total of 145.50 sq. km including mining area of 76.19 sq. km and exploration covering an area of 66.41 sq. km. In order to acquire maximum profit in the shortest period of time, whole swaths of land have been excavated in several sites and in some cases the whole face of a mountain has been ripped in the process of exploration, water diversion, mining and road construction. Such a large scale and aggressive expansion out of the mine could have caused the recent event of landslide.

Due to the massive influx of Chinese migrants, Tibetans are left with very few employment opportunities and other benefits. The fact that only two of those trapped are Tibetan and the rest are Han Chinese migrant workers from neighboring provinces of Yunnan, Guizhou and Sichuan is a clear indicator. Many Tibetan farmers and nomads have been forced to move away from their ancestral pastures and arable lands which have been expropriated by government to make way for the expansion of mining operations in Gyama. Reports of environmental pollution leading to water contamination, illness of local Tibetans and loss of animals are common in the Gyama Valley.

The impacts of rampant mining activities have led to social unrest and related issues. In 2008, Chinese mining company carried out a water-diversion project in the upper Gyama region leading to forceful confiscation of agricultural lands. The mining, which has been going on in the upper hills of Gyama for nearly two decades have led to toxic wastes being dumped into Gyama Shingchu river resulting in the death of a large number of cattle.

Villagers in the valley depend on Gyama Shingchu for their drinking water supply and irrigation. In the same year, local Tibetan residents from Gyama Township reportedly petitioned the local government to put an immediate halt to the mining project in the area. The local government responded by putting the whole region under heavy military surveillance, with imposition of severe restrictions on communication to outside world and people visiting the region. A positive response seems unlikely, as it will be at odds with the self-interests of many officials who make quasi-legal financial gains by protecting mining enterprises. On 20 June 2009, angry villagers took to streets and clashed with Chinese miners and the scuffle between Tibetans and miners were followed by police crackdown leaving 3 Tibetans wounded.

As opposed to being a model for "green mine" or "progress", Gyama Mine is a model of the issues relating to over 200 mining sites across Tibetan plateau which faces similar or even worse socio-economic and environmental problems, requiring urgent attention. EDD hope that Chinese government will put sincere efforts to figure out the real cause of the landslide in the mine operated by Huatailong Mining Development Co. Ltd,(a subsidiary of the State-owned China National Gold Group Corporation) and take appropriate measures. EDD also call on Chinese government to ensure active participation of Tibetan people in all decision making process in Tibet; social, environmental (Environmental Impact Assessment) and cultural impacts are fully investigated; natural resources are not depleted; migration and settlement of non-Tibetans into Tibet are not facilitated; ownership of Tibetan land and resources are not transferred to non-Tibetans; and large-scale, capital-intensive and commercial projects are not facilitated inside Tibet.