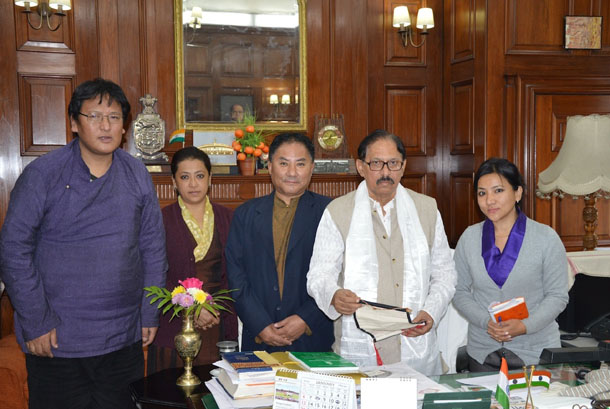 Kolkatta, January 12, 2013: The North-East Zone Parliamentary delegation successfully concluded yesterday the first leg of its 'All India Lobby campaign,' an undertaking of the Tibetan Parliament in exile.

During the final 2 days of the 5-day campaign, the 4-member delegation held a 30-minute meeting with the speaker of the Legislative assembly, Shri Biman Banerjee, at his office at the Vidhan Sabha. The speaker lauded the 'functioning of Tibetan democracy in exile as exemplary for other fledgling democracies.' The speaker advised the Tibetan leadership to seek an 'All-Party Parliamentary resolution on the crisis inside Tibet', in both houses at the center; the Rajya Sabha and the Lok Sabha.

A special meeting with Shri Derek O Brein, member of Rajya Sabha and chief whip of All India Trinamool Congress Party (AITC) and the face of the famous Television series 'Bournvita Quiz contest' proved constructive. Shri Derek directed the Tibetan delegates to engage in a tri-step coordinated action of 'education, orientation and direction' to gauge and secure a substantial diplomatic action from Indian policy makers. Derek pledged his party's support for an 'All-Party Parliamentary resolution on the crisis inside Tibet.' AITC has 28 Members of Parliament at the Center with an impressive breakdown of 9 MPs at the Rajya Sabha and 19 MPs at the Lok Sabha.

The Parliamentary delegation convened a press conference on January 11, at the Palladian lounge at the Bengal Chambers of Commerce and Industry from 4 to 6 p.m. The conference attended by around 25 members from the media fraternity saw the prominent presence of bigwigs from The Times of India, The Statesman, The Hindu, The Hindustan Times, PIT, Reuters and ANI. The 30-minute film on self-immolations, 'Tibet, the Burning Question for Freedom' was also screened.

The campaign concluded with a 'Mass solidarity rally for Tibet.' More than 200 people -Tibetans and local Kolkatians lighted candles, chanted prayers and marched for 3 kilometers from Wellington square to the Press club of India at Esplanade.

The 5-day lobby campaign at West Bengal concluded on a positive note. Besides the meeting with the honorable Governor Shri M.K Narayanan, the delegates delivered a memorandum to Honorable Chief Minister (CM) through Mr. Ashok Subramaniam, Officer on Special duty (OSD) to the CM. The other MLAs of West Bengal with whom the delegation couldn't engage in a direct face-to-face meeting were apprised of the campaign and its goals through a memorandum sent via priority mail.

This year the Tibetan Parliament in exile launched a massive 'All-India Lobby Campaign' to highlight the critical situation inside Tibet and to seek timely support of the Indian leaders and people while alongside calling for immediate global intervention to end the crisis inside Tibet.

Upon completion of the first leg, the North East zone Parliamentary delegation will visit, Odisha, Chhattisgarh, Jharkhand, Arunachal Pradesh, Meghalaya, Assam, Sikkim and Nagaland for the 'All India lobby campaign.'