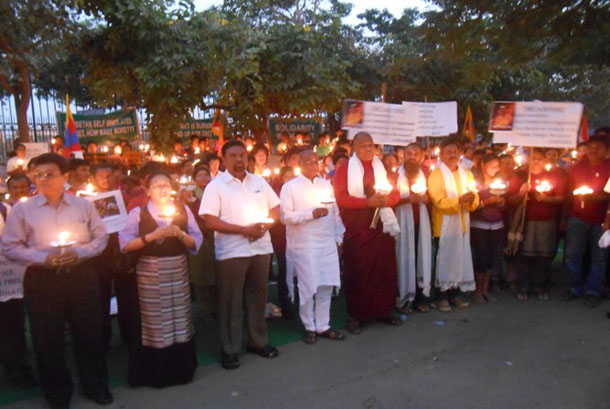 Hyderabad: The 'Solidarity with Tibet' Campaign held a press conference on 9th morning in the city Press Club, Hyderabad. Despite intense on-going political commotion in the city, over 20 reporters and journalist from various electronic and print media including Times of India and Hindu showed up to the Press Conference.

Hyderabad: - The 'Solidarity with Tibet' Campaign held a press conference on 9th morning in the city Press Club, Hyderabad. Despite intense on-going political commotion in the city, over 20 reporters and journalist from various electronic and print media including Times of India and Hindu showed up to the Press Conference.

The press conference began with an introduction of the campaign followed by screening of the short documentary film on the current crisis in Tibet. The members also spoke about various issues related with the Tibetan Freedom Struggle and the current ongoing crisis in Tibet, especially the wave of Self-immolations by the Tibetans to protest against the repressive policies of the Chinese government in Tibet. This was followed by questions from the press that was responded by the Tibetan parliament delegates. Many of the journalists spend considerable amount of time with the Tibetan delegates to interview them individually.

On 10th evening from 4-7.30 PM a public event was held at Indra park in Hydrabad city. A busload of 58 Tibetan college students from Vijayawada joined Tibetan sweater sellers, Tibetan collage students in Hyderabad and over 50 Indian supporters, mostly members of Jai Bharat NGO led by Mr. Murthi, a long time strong supporter of Tibetan cause. All together there were over 300 participants in this event. The gathering was addressed by Mr. Jigmey Jungney, Ms. B. Tsering and Ms. Tsering Youdon in Tibetan, English and Hindi respectively.

Mr. Niranjan, Congress General Secretary while lauding the Tibetan peoples' undying spirit despite the growing Chinese might, he reassured Congress party's support for the Tibetan cause that was pledged by Pt. Nehru in 1959. "The Tibetan people's aspiration will be fulfilled. The oppression in Tibet by the Communist China will end. Things will change. We fully support your non-violent struggle and we will be with you always" stated Mr. Niranjan.

Col. Ranga Raj who has seen Tibetan refugees in early sixties stated, "The Tibetan youth should develop your intelligence. Spread information about Tibet to the world through electronic media. Obtain economic empowerment through good education and employment. Start entrepreneurs that will generate business for yourself and employment for others and spend a minute to pray for those Tibetans in Tibet for prayers said in total sincerity has great power". He further added that, "Tibetans are the most beautiful, honest, and peaceful people in the world. They deserve justice and support of the world, specially from India". He also thanked Dr. Tenzin Gonpo of Mentsekhang, Hyderabad for introducing him to the Tibetan movement.

The 'Solidarity with Tibet' Campaign in the Hyderabad city ended with a Candle Light vigil and prayer for World Peace.

The city's major media groups including print and electronic reported the week-long Tibetan Lobby campaign in the city.