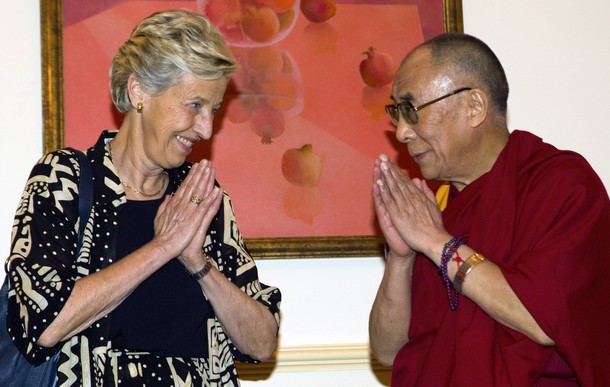 ADDRESS BY HIS HOLINESS THE DALAI LAMA TO THE TIBETAN-CHINESE CONFERENCE IN GENEVA ON AUGUST 6, 2009

I extend my greetings to the Chair of this conference, the organizers, the delegates who have come from many different places, and guests. I would specially like to commend the International Fellowship of Reconciliation and the Swiss Tibetan Friendship Association for organizing this wide-ranging conference of Chinese and Tibetans.

For over a thousand years, the Tibetan and Chinese people have co-existed as friendly and harmonious neighbors with mutually enriching relations in the social and economic fields as well as in religion and culture. Occasionally, there were times when we fought each other. However, for the most part, relations between Tibetan and Chinese peoples were peaceful. Since Buddhism flourished in China before Tibet, Tibetan Buddhists accord Chinese Buddhists the respect and deference due to senior spiritual brothers and sisters.

Just as the rest of the world witnessed tumultuous developments in the twentieth century, China, too, experienced dramatic changes. Soon after the Communist Party took over China in 1949, the People's Liberation Army entered Tibet, forcefully defeating the small and ill-equipped Tibetan army in Chamdo. In 1951, the 17-Point Agreement was signed under duress and all of Tibet was incorporated into the People's Republic of China.

Despite all our sincere efforts to abide by the 17-Point Agreement, eventually (in 1959) I, along with my Cabinet, had to go into exile with around 80,000 Tibetans (both lay and the clergy) who were able to follow us. Soon after arriving in exile we began intensive and in-depth discussions on resolving the Tibetan problem through contact and discussions with the Chinese authorities. As a result, around 1974 we adopted the Middle Way Approach. The guiding spirit of the Middle Way Approach is the pursuit of a mutually acceptable and mutually beneficial solution through negotiations, in the spirit of reconciliation and compromise. We resolved not to seek the separation and independence of Tibet but to strive for a solution within the framework of the PRC. Thus, in 1979 when the late Chinese leader Deng Xiaoping signaled willingness for contact and discussion, we were fully prepared to respond positively. On establishing direct contact we sent delegations on fact-finding missions and for exploratory talks - altogether numbering 20 delegations. However, sadly there was no concrete outcome. Moreover, all direct contact ceased in 1993. As a result there were an increasing number of people in the Tibetan community in exile who did not agree with the Middle Way Approach.

Against this background, in 1997 we conducted an opinion poll among Tibetans in exile in which more than 64 per cent supported continuation of the Middle Way Approach. Consequently, we worked to re-establish contact with the Chinese Central Government and succeeded in doing so in 2002. Since then my envoys have so far had eight formal rounds of discussions with the concerned leaders of the Chinese Government and one informal meeting. Unfortunately, on account of a lack of political will on the part of the Chinese Central Government to address the issue of Tibet in a sincere and realistic way, the talks did not yield any tangible results. Moreover, the situation inside Tibet has worsened dramatically since the crisis in Tibet of March last year. Beijing has labeled those who peacefully demonstrated their dissatisfaction with policies towards minority nationalities, particularly Tibetans, as being anti-Chinese, thus fanning racial antagonism and hatred between the Tibetan and Chinese peoples. This is a most irresponsible policy. It has resulted in baseless suspicion and distrust between the two communities. I am deeply saddened and concerned about this development.

Fortunately, many Chinese intellectuals have not succumbed to the propaganda of the Central Government. They have made the effort to understand the issue objectively. Thus, based on their own observations and findings, they have displayed sympathy and support for the Tibetan people in many articles. This is a source of great encouragement to the Tibetan people and triumph of truth.

My envoys have clearly conveyed both in writing and verbally, to the Central Government the essence of my Middle Way Approach that seeks a solution to the Tibetan problem within the framework of the People's Republic of China and in accordance with the principles of its Constitution. The Constitution provides regional self-rule for minority nationalities. During the eighth round of talks last year, my envoys presented the Memorandum on Genuine Autonomy for the Tibetan People. Based on provisions in the Constitution of the People's Republic of China and the Law on Regional National Autonomy, this Memorandum explains in detail how the Tibetan people could exercise meaningful national regional autonomy. However, to our great disappointment our initiative was unabashedly labeled as disguised independence or a demand for semi-independence, and our Memorandum was categorically rejected and no effort was made to present a counter-proposal. As a result today, my faith in the good will of the present Chinese leadership is shaken.

In view of this sad state of affairs, I called a Special General Meeting of the Tibetan people. Last November around 600 delegates representing all Tibetans in exile gathered in Dharamsala for a six-day conference. The meeting discussed at length the situation inside Tibet and developments in China as well as the future course of the Tibetan freedom struggle. It also considered whatever views we were able to gather from a cross-section of Tibetans inside Tibet. Similarly, a special meeting was held by the Tibet Support Groups from all over the world.

In both meetings, even though there were strong voices calling for a change of the Middle Way Approach and an end to our contact with the present Chinese government, most of the participants endorsed continuation of the Middle Way Approach as well as the Tibetan-Chinese dialogue process. With this public affirmation of our Middle Way Approach, we stand ready to engage in earnest and sincere discussions as soon as there is a clear signal from Beijing that the Central Government is willing to address the real issues facing the six million Tibetans inside Tibet.

I have two appeals to our Chinese brothers and sisters who are participating in this conference. First, I seek your advice and frank opinions on what steps to take in future to solve the Tibetan problem. Secondly, I request your help in carrying a message to the Chinese people that we Tibetans harbor no hatred against our Chinese brothers and sisters, and that we Tibetans are neither anti-Chinese nor anti-China. I seek your help and cooperation in preventing the issue of Tibet being turned into an issue of racial prejudice and antagonism between the Tibetan and Chinese peoples.

I would like to conclude by expressing my gratitude to all participants who have come from distant places, as well as to the organizers. I pray that this conference will mark an important step towards a common future based on genuine trust, friendship, mutual respect and benefit.