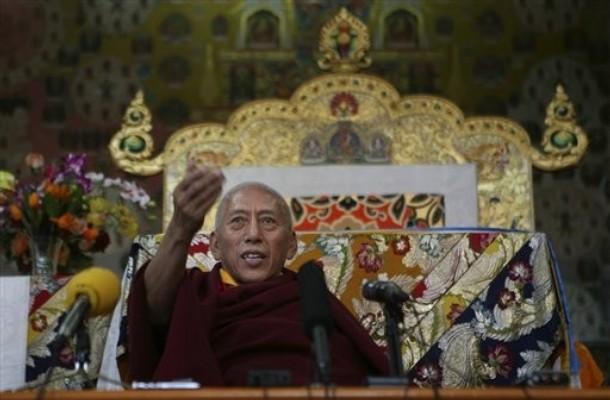 While making obeisance to His Holiness the Dalai Lama, the supreme religious and political leader of the Tibetan people as well as an apostle of world peace, I would like to extend my affectionate greetings to the Chair of the conference, Mr. Jonathan Sisson, Dr. Tashe Thaktsang, Mr. Yan Jiaqi, distinguished guests, conference participants, media people and to my colleagues from the Central Tibetan Administration.

First and foremost, I would like to express my heartfelt thanks to the International Fellowship of Reconciliation and the Swiss-Tibetan Friendship Association for holding this historic meeting in the famous city of Switzerland — Geneva. In this crucial and critical period, if the Chinese and Tibetan peoples remain mired in perennial suspicion and do not engage with each other to create better understanding between themselves, then this will not only be a great loss to both Chinese and Tibetans but will also help in fulfilling the objective of those who are bent on separating the two peoples. Therefore, organizing this conference is in keeping with the need of the hour.

Switzerland is a neutral country that has, for a long time now, relinquished warfare as a tool of state policy. It is also a unique country that has a long history of having contributed to resolving many international conflicts. Moreover, Switzerland is — aside of being a place where the largest number of Tibetans in Europe live — a favourite tourist destination for many people, whether we consider the scenic beauty of its landscape, its geography or its climate. Therefore, the choice of the venue of this conference is perfect. The organisers of the conference are also perfect, in that both the International Fellowship of Reconciliation and the Swiss-Tibetan Friendship Association are bodies dedicated to promoting harmony and friendship in human societies. Moreover, the participants are perfect as they are all people with great intellect and experience; people who cherish justice; and people who possess liberal outlook that shuns narrow parochial feelings or holding one’s own view as supreme and who believes in seeking truth from facts. Furthermore, this conference has perfect guidance in the form of a keynote address delivered by no less a person than His Holiness the Dalai Lama, who has kindly consented to grace this inaugural session of the conference. So, I have no doubt that this important gathering with four “perfections” as I explained before, will bring about a great outcome that will go a long way in fulfilling the short- and long-term benefits of the Chinese and Tibetan peoples.

All of you participants have taken the trouble to come from distant places or countries across the world to attend this conference, sparing your precious time and money. We are greatly moved and encouraged by this gesture of yours, as it clearly shows how much importance you attach to the unity between the Chinese and Tibetan peoples and how much responsibility you shoulder upon yourselves to actually bring about this. While welcoming all of you to this conference, I — on behalf of the entire Tibetan people — would like to express our heartfelt gratitude and thanks to each one of you present here.

As every one gathered here knows, Tibetans and Chinese have lived in friendship as brothers and sisters for the most part of their long histories, although occasionally they fought wars against each other. On the whole, however, they continued to remain as close neighbours in the past. Since the 7th century onwards, relations began to develop between these two peoples on religious front as well. In the later years of the 13th century, a special relationship called the Priest-Patron relationship was forged between the Chinese Yuan emperors and Tibetan rulers. This unique relationship was replicated even during the period of the Manchu rule over the Chinese nation. The 20th century saw a great change — political, economic and social — taking place across the length and breadth of the planet we live in. Under this global trend for change, the Chinese Communist Party took over the rein of its country and since then, both the Chinese and Tibetan peoples have had to undergo untold sufferings and difficulties. 50 years have elapsed since the flight of His Holiness the Dalai Lama and over 80,000 of his Tibetan followers to exile [in 1959]. The six million Tibetan people living in Tibet continue to suffer as it has been over these long and gloomy years; their situation has not changed even to this day. However, His Holiness the Dalai Lama — recognising very clearly that these sufferings are caused by the myopic and narrow Tibet policy framed by a small number of Chinese political leaders and not by the Chinese people — has always made every possible effort to see to it that the Tibetan and Chinese peoples are not separated in their hearts and minds. Seen from the Chinese world also, there are a countless number of people who know the truth showing great respect and reverence to His Holiness the Dalai Lama and sympathising with the Tibetan people. And this community of Tibet sympathisers is today becoming ever more prominent or conspicuous in terms of voicing their support to the Tibetan people. For example, all of us know of the many Chinese nationals from within the Mainland China — and outside it — writing honest articles or opinion pieces on the true situation inside Tibet since the massive and peaceful protests that shook the World’s Roof, beginning March 2008. These articles reflect the viewpoint of the Chinese people at the grassroots level.

Earlier, the Chinese authorities used to describe all Tibetans to be happily reposing trust and confidence in the Chinese government after their having achieved “liberation” from the past “feudal serfdom” and blame a small number of separatist “Dalai Clique’’ for creating all the troubles. Since last year’s popular March incident, however, it has been engaging in a systematic, well-planned activities and propaganda to split the Tibetan and Chinese peoples by portraying the entire Tibetan protests as being anti-Chinese. It seems that there were, among the general Chinese populace, a considerable number of people who harboured animosity towards the Tibetans as a result of their having been deluded by these Chinese official propaganda. But more and more Chinese people are, now, beginning to understand what the reality is with the gradual unfolding of the truth. The recent report on last year’s Tibet protests, published from Beijing, is a clear evidence of the fact that there are many Chinese who do not always let themselves to be befooled by the lies spewed out by the Chinese state propaganda machinery. In this regard, His Holiness the Dalai Lama has said many times: “Although my trust in the Chinese leadership is growing thinner and thinner, my trust in the Chinese people is always intact, without undergoing any changes.”

Whereas the unity among nationalities is the basis of a country’s stability, China’s stability is the basis of peace throughout the world. Nobody can take this issue lightly. The exile Tibetan Administration led by His Holiness the Dalai Lama, serves as an independent spokesperson of the six million Tibetan people. This Administration has now and again made it amply clear to the relevant authorities of the People’s Republic of China (PRC) that it firmly holds on to the mutually beneficial Middle-Way policy, which seeks to resolve the problem of Tibet along the line of the existing constitutional provisions of the PRC. The envoys of His Holiness the Dalai Lama have, in particular, made this very clear — both verbally and in writing — to the heads of China’s Central United Front Work Department in the course of the eight rounds of formal talks and one round of informal talk they have had with them since 2002. That we are committed to finding a solution to the Tibet problem within the Chinese political framework can also be gleaned from the contents of the Memorandum on Genuine Autonomy for All Tibetans (this memorandum has already been made public now) the Tibetan interlocutors presented to the PRC during the latest, eighth round of talks. From our side, because we are committed to pursuing an approach that does not seek estrangement of the Tibetan and Chinese peoples, there is no change whatsoever in our thinking that in the future also, we should engage in dialogue with the Chinese leadership on the memorandum we submitted last year.

The People’s Republic of China is a multi-nationals country. Those in the governance should, therefore, fulfil the aspirations of all nationalities under its jurisdiction. Should it succeed in doing so, then the unity and equality of nationalities as enshrined in the Chinese constitution will also be realised.

Regarding the ideology, policy and the conduct of works of the current political leadership in China, people have adopted various and sundry means to express their dissatisfaction or disagreement with — and opposition to — these in the past and will, probably, do so in the future as well. What is of utmost importance, however, is that we should see to it that these do not lead to the deterioration of harmonious relationship between the Tibetan and Chinese peoples. I would like to urge the participants of this conference to kindly explain to the general Chinese populace the real thinking and position of the Tibetan people, particularly Tibetan exiles, and of the exile Tibetan administration led by His Holiness the Dalai Lama — and thereby bringing about a stable harmonious relationship between the two peoples. I would also like to urge all of you to provide us suggestions or guidance on the future course of action we should take.

I would like to take this opportunity to express our utter dismay over the recent sad turn of events in East Turkestan(Xinjiang). In solidarity with all those who have lost their lives and sustained injuries during that time, as well as the great loss of properties that accompanied it, I offer my condolences and prayers for all of them.

To conclude, I pray for the long life of His Holiness the Dalai Lama and the fulfilment of all his wishes. I also pray that the unity between the Tibetan and Chinese peoples may last for thousands of years and that the Tibetans inside and outside Tibet may be reunited soon. May this conference bring about a meaningful outcome! Thank you.