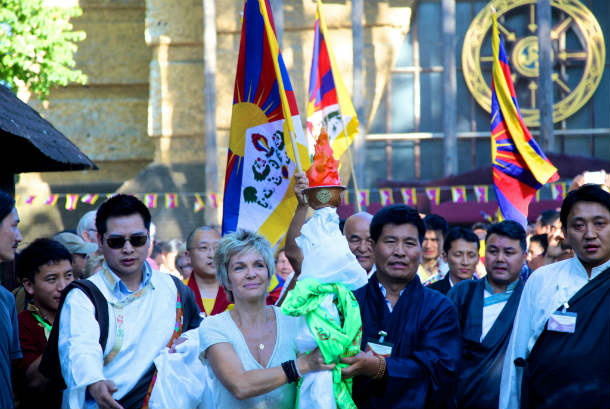 Paris: - A two-day Tibet awareness activity was held in Le Vigan - Mount Aigoual, in the Languedoc-Roussillon region of South-central France on 22 and 23 September. The event was organised by Tibet-Languedoc, a French Tibet support group along with the support of the municipality of Le Vigan.

The two-day programme included public talks and conferences on Tibet, film screening, concert and a march for Tibet to the Mount Aigoual, the highest point in the Cevennes mountain ranges of the region.

Speaking to a packed audience of around 100 local people in the small municipality hall, the Secretary of Bureau du Tibet, Paris Mr Tsering Dhondup highlighted the current situation in Tibet. He underlined the policies of the PRC government which threatened the very existence of the Tibetans as a distinct people and their unique cultural heritage.

Mr Tsering Dhondup also spoke on the dismal condition of the fundamental human rights and shed light on the environment issues and particularly the problem's arising out of the forced "resettlement of Tibet nomands".

Eco-Tibet France, an organisation researching on the developments on the environment and ecological conditions in Tibet also presented its findings through one of its researchers, Francoise Bonzon.

On 23 September, around 100 supporters and some curious French participated in a four-hour long hike to the Mount Aigoual, displaying Tibetan flag and the pictures of the 51 Tibetans who have self-immolated in Tibet calling for freedom and the return of His Holiness the Dalai Lama.

A "sangsol" followed by prayer for the Tibetan martyrs was held at the summit, to close the event.