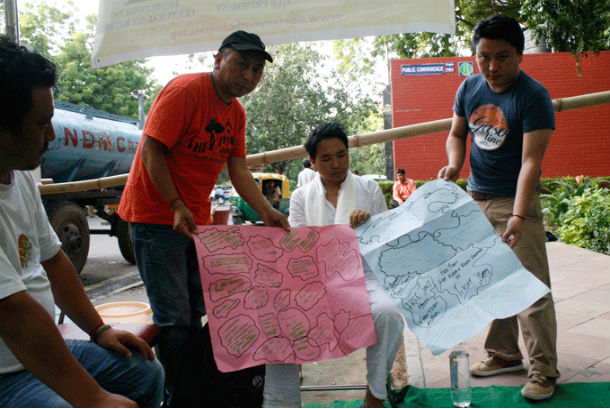 RTYC Darjeeling's President, Tashi came to visit the Hunger Strikers and brought along with him the message of support and solidarity from hundred and more students who belong to different nationalities. They send their appreciation and hopes from the hunger strike campaign. The gesture definitely lifted the spirit and the heart of all those who are with the Hunger Strikers.

The representatives of TYC's Regional Chapter in Kathmandu met the United States and British embassy officials to discuss and submit the appeal letters concerning the TYC Indefinite Hunger Strike and urged the western countries to help in meeting the demands and appeal of the campaign.

They also submitted the appeal letters to the offices of the United Nations, European Union and embassies of several countries including France, Japan, Italy, Germany, Australia and Myanmar.

Yet again, some Chinese observers were noticed watching the Hunger Strikers and the ongoings in the tent. On approaching them to ask about their identity and their purpose, they ran away from the site creating suspicion in the minds of the activists.

People make a nation, and people make changes happen. Likewise, TYC Indefinite Hunger Strike has dedicated and persuasive Tibetans and Indians who contribute their time and effort into the cause of Tibet without any hitches. Most of them are not first timers in working on TYC campaigns of this kind, they have been doing it for quite a long time. Like the TYC Central Executive Committee, they are old-timers.

Most of the people named here are those who have participated in similar hunger strikes in the past, stayed without food for more than 30 days while some are new to working with TYC. All the work around the tent to maintain it and have everything functioning well is taken up as their responsibility and they do it well. The team functions well, each fulfilling their duties effectively.