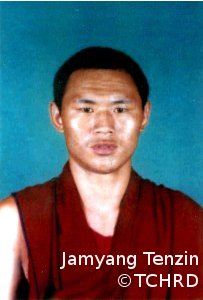 Dharamshala: A Chinese court in Kardze County, Sichuan Province, sentenced a Tibetan monk to three years in jail for his involvement in protest against the “Patriotic Education” campaign launched in Lithang in 2007, according to confirmed information received by the Tibetan Centre for Human Rights and Democracy (TCHRD).

Jamyang Tenzin, a 35-year-old monk of Yonru Geyden Rabgayling Monastery was sentenced to three years in jail by the Kardze Intermediate People’s Court around 3 July 2009. According to source, Jamyang Tenzin was arrested on 3 October 2007 for opposing the “work team” from conducting “Patriotic re-education” Campaign in the Yonru Monastery in Lithang County. The lengthy detention of Jamyang Tenzin since his detention in October 2007 until his court sentence in July this year is a matter of great concern and was a clear violation of the Chinese constitution and the international laws. Almost nothing is known of the circumstances under which Jamyang Tenzin was tried. Moreover, there is no information on whether he was provided with any due legal process, representative of his choice as his family members were completely kept in limbo for the past more than 21 months since his detention in 2007.

A massive “patriotic education” campaign was unleashed in all the monastic institutions in Lithang County following a series of protests in Lithang led by Ronggye A'drak during the annual horse race festival on 1 August 2007. Subsequently, the Chinese authorities summoned leaders of townships and monasteries in and around Lithang to commence the ‘patriotic education’ campaign in the first week of September 2007 which lasted for three months. During one of those “patriotic education” campaigns in Yonru Geyden Rabgayling Monastery in Lithang on 3 October 2007, Jamyang Tenzin confronted the ‘work team’ from carrying out campaign which required monks and nuns to write essays denouncing the Dalai Lama and demonstrate their allegiance to the Chinese government. Jamyang Tenzin even raised the question on the arrest of Ronggye A'drak and other Tibetans and expressed his concern on their whereabouts. He later concluded by shouting, "May the Dalai Lama live for thousands of years." Jamyang was arrested right away by the local PSB officials after the conclusion of the 'Patriotic education' session at the monastery and his status remained unknown until the court trial in the beginning this month.

Jamyang Tenzin, a 35-year-old born to Thinley Tsering(father) and Tsering Dolma(mother) and was a native of Youru Sakhor Village, Lithang County, Kardze “Tibetan Autonomous Prefecture” (‘TAP’), Sichuan Province. Jamyang was a monk of Yonru Geyden Rabgayling Monastery, a small branch monastery under the umbrella of Lithang Monastery. Jamyang visited India in 1995 and studied at Gaden Jangtse Monastery in South India until his return to Tibet in 2004. While returning to Tibet, he was detained at the Nepal-Tibet border and later detained for three months.

TCHRD strongly condemns the sentencing of Jamyang Tenzin as his freedom to opinion and expression does not violate any of the constitutional components of Chinese law. TCHRD is gravely concerned for the fate of Jamyang Tenzin and like to seek immediate intervention by the governments and the international community. Since his activity constitute nothing more than an expression of opinion, thought and exercise of his basic human rights peacefully, TCHRD calls upon the Chinese authorities to release him unconditionally. click here to know more details on Jamyang Tenzin