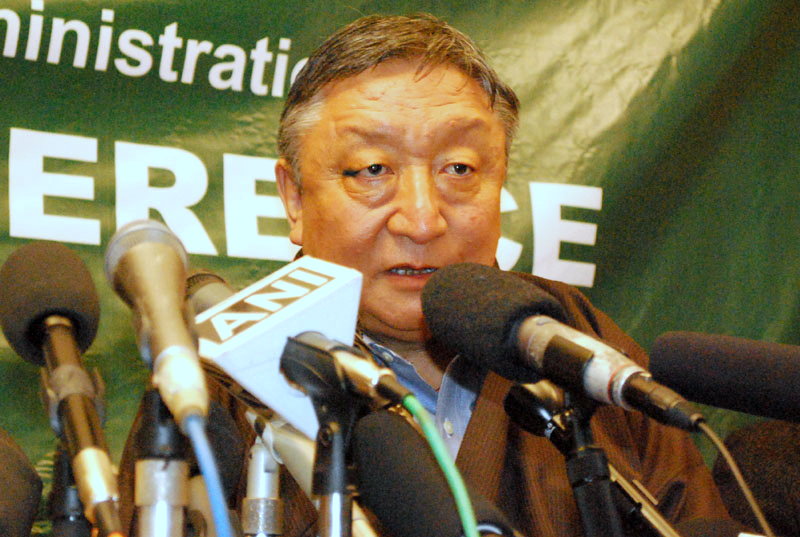 Washington: Mr. Lodi Gyari, the special envoy of His Holiness the Dalai lama, issued the following message on March 23, regarding the current lock-down of Tibet and the many Tibetans who have self-immolated in the past two years.

"As you would expect, the ICT Board focused its attention on the terrible situation in Tibet, as the self-immolations are of grave concern to us all. And, while there is widespread international sympathy and support, no one feels the sorrow as much as the Tibetans themselves and especially His Holiness the Dalai Lama.

I am writing as ICT Executive Chairman, at this critical time for Tibet, to share some personal reflections on our ICT Board discussions today, March 23, and to ask for your continued commitment to the Tibetan struggle.

There was much for the ICT Board to consider - the extended reach of the protests, the implementation of oppressive policies across Tibetan regions, the willingness of more and more Tibetans to confront the authorities, and the often brutal response by the Chinese armed police and military. ICT President Mary Beth Markey assured the Board that the entire ICT organization would use every resource available to get the facts and analysis of events in Tibet out to the general public, media and policymakers with the intention of persuading China to change its policies and practices in Tibet. We all resolved to work together with extra effort so that the international community and particularly world leaders understand that the Tibetans are rising up against oppression and mis-rule and that, therefore, it is only the Chinese authorities who can bring this tragic situation to a close.

This was explicitly conveyed to Mary Beth during her recent visit to Dharamsala when she met with several monks from Kirti monastery and others who have connections and an intimate understanding of the emotions of the people in Ngaba. Mary Beth asked the monks what would help stop the self immolations, and they told her what will end this tragic situation is when China stops demeaning their culture, their identity, their language and their leader, His Holiness the Dalai Lama. The Chinese government is the responsible party as the restive situation in Tibet continues to escalate - and Tibetans continue to sacrifice themselves to free others from suffering.

I also had the opportunity to brief the Board of my recent visit to India and in particular I shared my own experience of observing the tremendous enthusiasm for Kalon Tripa Dr. Lobsang Sangay among the more than ten thousand Tibetans who travelled to Bodhgaya from Tibet for the Kalachakra teachings this past January. I watched their faces as he addressed the crowd and at once felt their hope in him and the importance of helping him succeed. The political transition in the Tibetan community in exile also provides important context for our movement in and outside Tibet. We will certainly do everything we can to assist Kalon Tripa Dr. Lobsang Sangay and the Central Tibetan Administration.

The Board also discussed the status of the dialogue process and was dismayed with the PRC's shortsightedness in responding to our sincere efforts, particularly at a time when the situation in Tibet is so dire. In this context the leadership succession in the People's Republic of China beginning this fall and the wait for it to take hold could be particularly frustrating for those seeking positive change in China and Tibet.

Let me conclude by saying that you have a dedicated and professional team working on your behalf at the International Campaign for Tibet, and I look forward very much to continuing my close association with them. As stated above, the success of Dr. Lobsang Sangay and the Central Tibetan Administration is crucial for fulfilling the vision of His Holiness the Dalai Lama. We must all maximize our efforts at this critical time. I ask you to join me."