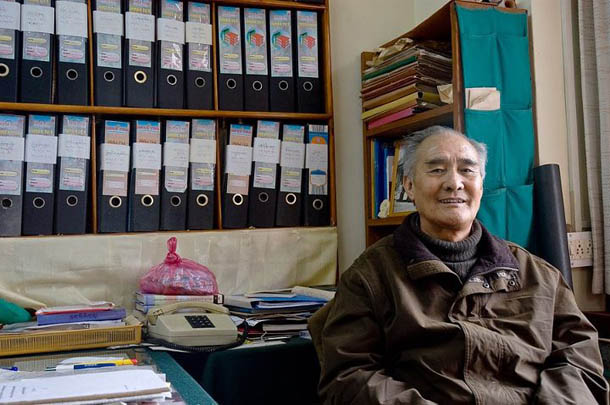 Dharamshala, India: - Mr Tenpa Soepa, a retired civil servant of Tibetan government, who later underwent twenty years of untold suffering after the Chinese invasion of Tibet, passed away in New Delhi on 13 December 2011. He was 78.

Born in 1933 at Taktse district in Tibet, he began his formal studies at a Tibetan school and later pursued his monastic education at a government-run school in Lhasa. At the age of 19, he joined the civil service of the Tibetan government as a Tsedrung.

He served as a supervisor of the entourage of His Holiness the Dalai Lama's first visit to Beijing in 1954.

Later, he worked in the office of the Reform Committee established by His Holiness the 14th Dalai Lama in his remarkable effort to reform and democratise the Tibetan society.

As the security of His Holiness the Dalai Lama came under threat from the Chinese army in March 1959, he was posted as the guard at the yellow gate of the Norbulingka palace. He also actively participated in all the political meetings during that time.

He successfully arranged the horses to take His Holiness and his entourage on the night of 17 March 1959, with the whole entourage safely ferried across from Ramakhang to Neu Dzong.

Upon reaching Neu Dzong,Kunleng Dzasak Woeser Gyaltsen, told him that an important official document of His Holiness had remained at the Norbulingka palace and asked him to fetch it. Without thinking of the dangers involved, he returned to Norbulingka palace.

Since China was in the middle of the crackdown on the year's national uprising against its rule, he was captured after getting wounded in a battle with the Chinese forces. He was forced to undergo hard labour in a prison in China, and later sentenced to 20 years in prison.

After his release from a long and harsh prison term in 1979, he got the opportunity to visit India in 1980 during which he received an audience with His Holiness the Dalai Lama.

He joined the Central Tibetan Administration on 1 June 1981and he was posted in the Department of Security.

On 18 July 1989, he was promoted to the post of deputy secretary and transferred to Doeguling Tibetan settlement, Mundgod as the settlement officer.

After that he was transferred to the Department of Home where he extended his retirement and served for two more years.

He formally retired from the Tibetan civil service on 1 July 1995, after serving the Central Tibetan Administration for 14 years.

Since then, he has wholeheartedly dedicated his service to the Office of His Holiness the Dalai Lama.