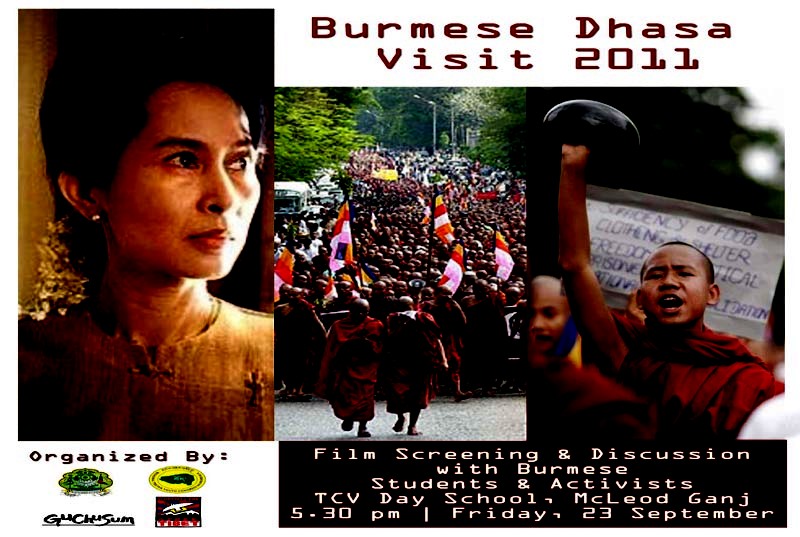 Dharamshala, India: As a part of the annual program, a group of Burmese refugee students and activists visits Dharamshala from 22nd to 24th September. The main aim of their visit is to learn more about the Tibetan struggle, get a sense of organization and the different strata of the community.

"The Burmese struggle for democracy and the Tibetan struggle for independence are both fighting Chinese colonialism. The Burmese military dictators are funded and supported by China. Being common victims of imperialist Chinese Government, we stand in solidarity with each other," said Tenzin Tsundue, President of the Regional Tibetan Youth Congress, Dharamsala, "There is much to learn and support each other. This kind of ongoing dialogue and sharing between the two struggles will help each other stand stronger in our own struggle."

In the course of three days, participants will have the opportunity to witness the ongoing session of the 15th Tibetan Parliament-in-Exile, visit the various NGOs, schools, monasteries and engage with Tibetan audience after an evening of documentary screening on their second day of the visit.

"People of Burma have been sharing a similar plight as ours under the military junta rule for almost five decades," said Jigdal, Program Coordinator of Students for a Free Tibet, India. "As a Tibetan born and brought up in exile, it is certainly encouraging to have Burmese students & activists visit Dharamsala to learn more about our freedom struggle."

This visit is being organized by the four Tibetan NGOs: Tibetan Women's Association, the Regional Tibetan Youth Congress, Dharamsala, Gu Chu Sum Movement of Tibet and the Students for a Free Tibet, India.