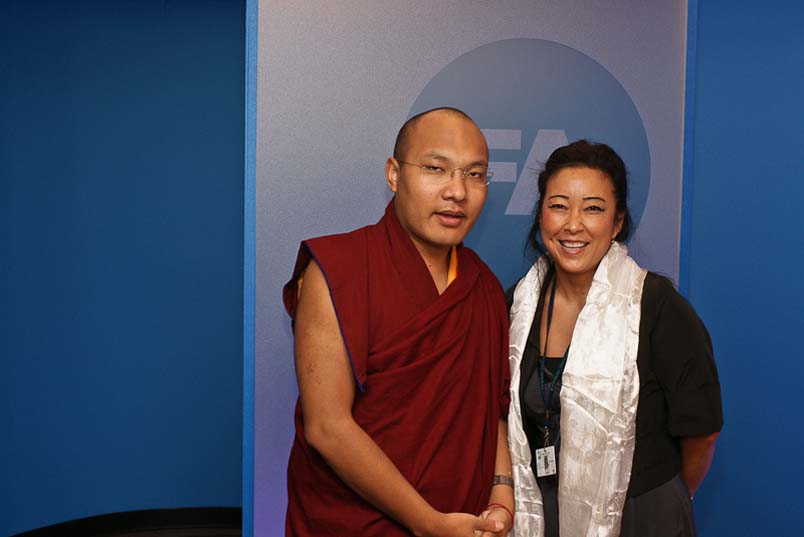 WASHINGTON, DC - On the heels of the spiritual leader of Tibet, His Holiness the Dalai Lama's visit to RFA earlier in the week, His Holiness Ogyen Trinley Dorjee, the 17th Gyalwa Karmapa Rinpoche, Fridat, 15th July visited RFA's headquarters in Washington, DC.

During the Tibetan lama's visit, he met privately with the news agency's leadership, gave an interview to RFA's Tibetan service, and met with RFA Tibetan's language service staff. He spoke about RFA's important role in its 15th anniversary year as a broadcaster for the Tibetan community both in Tibetan regions inside China and around the world.

"It is something like a dream for me to be physically present at Radio Free Asia," the Karmapa said in his meeting with RFA's Tibetan staff. "When I was in Tibet and listened to RFA Tibetan service programs, I wished that I could personally meet you in person. I am extremely delighted to be present amongst you in person."

"Through the programs of the RFA Tibetan language service, the audience both inside and outside Tibet are greatly benefited with the opportunity of receiving true stories on time for the Tibetan audience and others who are interested, and you promote freedom of expression through your broadcasts," he said in his address. "Your broadcasts are a crucial component for the Tibetan cause."

In his interview, the Karmapa said, "I was brought up in Tibet by listening to RFA Tibetan programs."

"You have completed 15 years of your service, and those 15 years signify extremely remarkable accomplishments," he stated.

The Karmapa is the head the Karma Kagyu sect of Tibetan Buddhism. The Tibetan spiritual leader is in Washington with the Dalai Lama for the 11-day Buddhist Kalachakra ritual, which concludes this week. Voice of America also interviewed the Karmapa on same day.