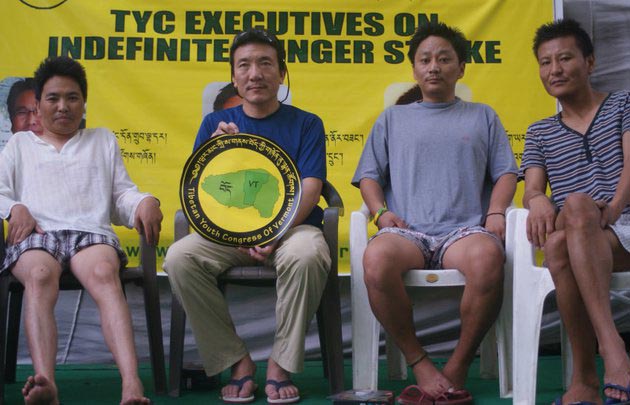 New Delhi: - The Tibetan Youth Congress decided 25 days ago to embark on an indefinite hunger strike aimed at highlighting the grave situation in Kirti monastery and the situation of the political prisoners in Tibet. We also made specific demands in relation to the same at the time. Our demands included: Immediate withdrawal of the "patriotic re-education" campaign and Chinese troops from Kirti Monastery and to unconditionally release all political prisoners including those arrested recently from Ngaba.

Access for Tibetan Youth Congress delegation to assess the situation of political prisoners inside Tibet. We appeal world governments and non-governmental organizations to recognize and support the historical status and struggle of Tibet as an Independent nation.

Since we began this hunger strike campaign, we have continued to receive pleas from inside Tibet, indeed from Ngaba region itself - where Kirti monastery is located - requesting us to end our hunger strike. They convey that, "Under the Chinese occupation in Tibet, aside from ordinary Tibetans who are consistently oppressed, the intellectuals, artists and writers are equally targeted if not worse. Given such circumstances, Tibetans in the free world should not jeopardize their lives and should stay healthy and call off this hunger strike." These requests - sent from our brothers and sisters inside our occupied homeland and from the Tibetans in exile all over the world- touched us deeply.

Twenty-five days after we began our hunger strike, our demands are not yet met. The situation continues to be grave. This is not surprising. Those who have harshly and heartlessly oppressed our people in Tibet for the last over fifty years, and continue to detain and torture anyone they suspect of supporting the just yearning for a free Tibet, cannot be expected to act otherwise.

Our campaign has received overwhelming support and encouragement from Tibetans, friends of Tibet and supporters all over the world particularly by various officials from Embassies and High Commission. We had the current Kalon Tripa Professor Samdhong Rinpoche call on the hunger strikers as well as the Kalon Tripa-elect, Dr, Lobsang Sangay la and Kalon and Representative of His Holiness the Dalai Lama in New Delhi, Mr. Tempa Tsering la. A message from His Holiness conveyed by the Kalon Tripa expressed concern regarding the health of the hunger strikers and the letter from the Kashag stated that "the campaign has already generated ample attention, solidarity and support and requested the strike be called off".

Today we had a prestigious visit to the site of the hunger strike headed by Ms Anne Vaughier Chatterjee, Attache, European Union Delegation to India, officials from various Embassies and High Commission such as UK, Belgium, Norway, Sweden and Poland who firmly requested that this hunger strike be called off due to the deteriorating health of the executive members and .

It said, "We the members of the European Parliament are fully committed to defending human rights in the world and understand your demands and fully support your ongoing peaceful struggle against the oppression of the Chinese government..." "...In the light of the above, we hereby reiterate our commitment to keep the issue of Tibet high on our agenda. We also believe that it would be of vital importance to send EU delegation as well as support independent journalists enter the region..."

In view of staunch requests from the delegation of European Union and their assurance for a continued support for Tibet in particular the issue at Ngaba Kirti Monastery coupled with pleas from our brothers and sisters inside Tibet, we have decided to indefinitely call off the hunger strike today. With a very heavy heart and tears in our eyes, the Tibetan Youth Congress calls off this fast however, we pledge that we will not cease to fight for a Free Tibet. If anything, our resolve today is even stronger than it was 25 days ago. We thank the many people in Tibet, in India and all over the world, who offered support to us in this hunger strike and support the just cause of Tibet.