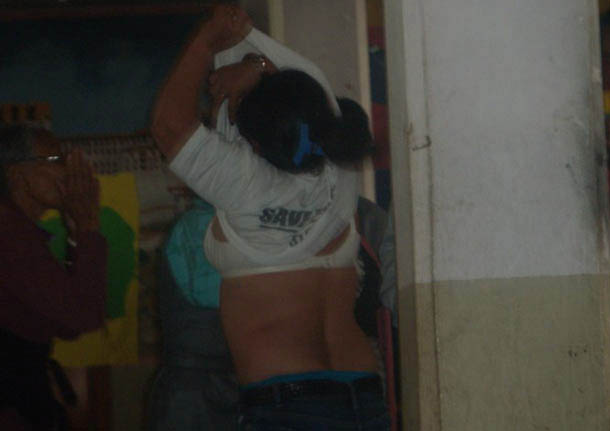 Dharamshala: Tibetan Women's Association (TWA), an exile women's group Wednesday is appalled by the unacceptable harassment of 42 year old Tibetan woman activist Sonam Choedon as she was publicly violated by Nepalese police. Ms. Choedon was harassed, coerced and ordered by Nepalese police to remove her top in public because of a slogan on her t-shirt which read: "save Tibet and stop the killing in Tibet".

In Kathmandu on Monday, April 21, Nepalese police disrupted a hunger strike which consisted of approximately 30 Tibetans advocating in solidarity for the Tibetans in Ngaba and the monks of Kirti Monastery who have been under increased crackdown by the Chinese Military over the past weeks. When the Tibetan woman activist objected to the unduly harassment and refused the order by Nepalese police to remove her top in public, the Nepalese police threatened to take all Tibetan hunger strikers to prison. The harassment and unacceptable use of power by the Nepalese police, who demanded public exposure of the Tibetan woman, is not only shameful but also completely unprofessional.

The situation in Kathmandu raises great concern of the direct pressure from the Chinese government on Nepal's government position which has stated that "pro-Tibet" activities will be prohibited in Nepal. This further ignites the growing concern of human rights violations.

The harassment clearly violates a number of articles within the Convention on the "Elimination of all Forms of Discrimination against Women" which Nepal signed and ratified in 1991(Article 1, 3, and 7). These articles which are most applicable pertain to human rights and fundamental freedoms with regards to an individuals' political freedom. In addition, the "International Covenant on Civil and Political Rights", which notes Nepal's accession in 1991 states specifically in Article 7 "that no one shall be subjected to inhuman or degrading treatment or punishment".

Ms. Sonam Choedon was subjected to the degrading harassment and order to remove her shirt in public. Other articles within the covenant that were violated are noted as violations against threat of arbitrary arrests, violation of freedom of expression, right to peacefully assembly, and protection against discrimination (Articles 9, 19, 21, 22, 26). In addition, other violations of basic rights afforded by The Declaration of Human Rights are noted: Article 5, 9, 12, 14, 18, 19, 20, 28, and 29. TWA calls on the Nepalese police responsible for this harassment to provide a public apology to Ms. Sonam Choedon.