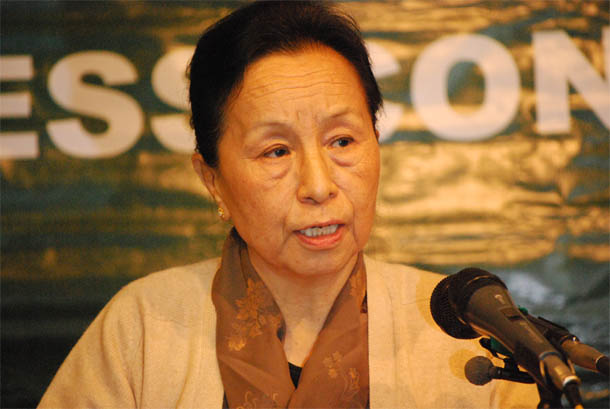 Dharamshala: - "We deeply regret the tense stand-off between the local Chinese authorities and the monks of Kirti Monastery and the local Tibetan population of Ngaba in northeastern Tibet," said Kalon Kesang Y Takla, Kalon for the Department of Information and International Relations of the Central Tibetan Administration based in Dharamsala. Kalon Kesang Y Takla further said: "In the strongest possible terms we urge both the Chinese authorities and the Tibetans in Ngaba to exercise utmost restraint. At the same time we urge the local Chinese authorities to immediately stop its blockade of Kirti Monastery."

Kalon Kesang Y Takla is reacting to the tense situation prevailing at Kirti Monastery, which is cordoned off by hundreds of Chinese armed forces who at one time prevented food and water being supplied to the 2,500 or so monks of the monastery.

This situation rose when Phuntsog, a 21-year-old monk of Kirti Monastery, set himself on fire on 16 March this year to protest the massive repression that was launched to crush the wide-spread peaceful protests in 2008, three years ago.

Shortly after Phuntsog lit himself on fire, eye-witnesses say the Chinese police beat him while extinguishing the flames. A group of Tibetan monks retrieved the fatally wounded monk from the police captivity and took him inside the monastery. At the same time, hundreds of monks and local Tibetans took to the streets to express their resentment over the Chinese authorities' heavy-handed approach over the incident. A large contingent of security forces were brought in to disperse the Tibetan protesters, many of whom were beaten indiscriminately with electric batons and iron clubs before being taken into police custody. Meanwhile, Phuntsog, who remained holed up for hours inside the monastery cordoned off by armed military forces, succumbed to his grievous burn injuries in the early hours of 17 March at a hospital. Hospital authorities demanded police clearance for treatment.

As part of the broadening crackdown, the Chinese government had enforced "patriotic re-education" campaign at Kirti Monastery since 20 March. The authorities have imposed an indefinite ban on the religious activities at the monastery. The situation worsened on 11 April as the local Tibetans gathered at Kirti monastery in an attempt to protect monks from being taken away for "re-education" at a detention centre. Several Tibetans were beaten and injured after the police set trained dogs on the crowd.

The Chinese government has started building concrete walls to close the gaps between the barbed wire fence to reinforce the blockade imposed on Kirti Monastery, restricting 2,500 monks from leaving the monastery. An estimated 800 additional armed security personnel were deployed at the monastery on last Saturday.

The security clampdown in Ngaba was further intensified on 20 March as the Tibetans attempted to celebrate the democratic elections in the exile community. Despite a heavy buildup of troops in the area, some people in Ngaba conducted prayers inside their homes and set off fire-crackers to mark the day. Some Tibetans were detained in the crackdown.

Sporadic arrests of Tibetans were also reported in Tawa, Kanyag Dewa and Cha township in Ngaba from 22 - 24 March.