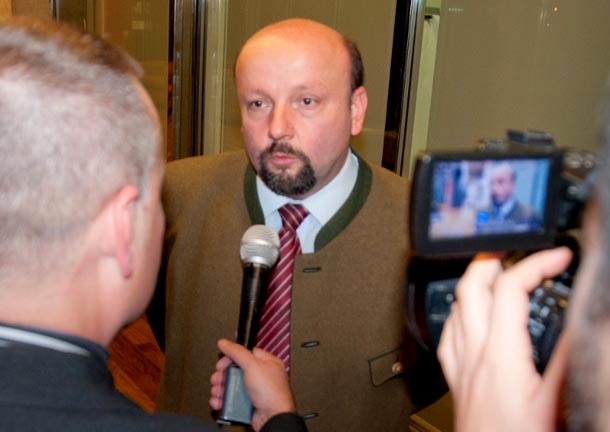 "Unfortunately, my successor Seppl Lamprecht was passed away on Dec 28, 2010, after a heart-attack. He had gone to for medical checkups, and later died after he suffered heart-attack. It's a big lost for all of us, late Mr. Lamprecht was also good friend of Tibetan people and the cause of Tibet," said in a letter sent on 10 January by Dr Franz Pahl the former president of South Tyrol Parliament.

We are deeply grieved to learn about passing away of Mr. Seppl Lamprecht, my colleagues in The Tibet Post International and Tibetan people convey our deepest and profound condolences to the family members of late Mr. Seppl Lamprecht and share this moment of sorrow and bereavement.

Seppl Lamprecht served many years in the South Tyrolean parliament, has been the youngest MP and after elected simultaneously in the Regional Council of Trentino-Alto Adige.
In the legislative period from 2003 to 2008 he was chairman of the SVP-Regional Group and in the parliamentary elections in 2008; he scored 10 713 preference votes and was elected as Vice President of the Regional Council.

The 1-page resolution, passed on April 16 2008, further expresses the regional parliament's solidarity to the Tibetan people, His Holiness the Dalai Lama, the Tibetan Government and the Tibetan Parliament in exile, saying it "supports the values of democracy and non-violence also in a context of globalization".

The Regional Council of South Tyrol supports for many Tibet initiatives for many years. The former Regional President Dr. Franz Pahl expressed his strong support for Tibet many occasions, saying "Tibet is always at my heart", for example, in 2008, approved a resolution for Tibet under his chairmanship table that reaffirms the solidarity with the Tibetan people.

In 2010, Seppl Lamprecht, met with Mr. Penpa Tsering, the speaker of the Tibetan exile parliament in exile at the Regional Council of Bolzano. During their meeting, the late Seppl Lamprecht said despite the national and regional parliaments close economic ties with the People's Republic of China, his people and government will support for the freedom expression of the Tibetan people and the Regional Trentino - South Tyrol will also continue its efforts in the future support for the people of Tibet."