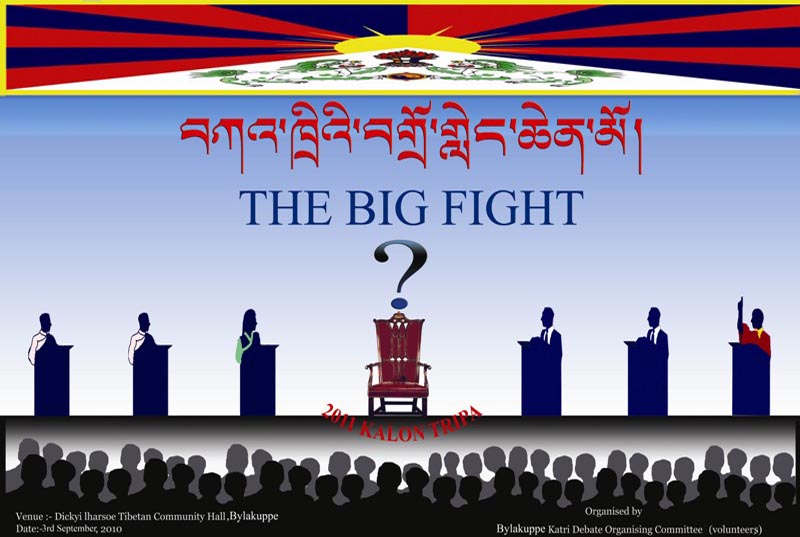 Bylakuppe: With just over a month until the preliminary elections for the prestigious exile post of Kalon Tripa (prime minister), a group of volunteers in Bylakuppe Tibetan Settlement have announced a major public debate, Katri Droeleng Chenmo,to be held on September 3.

Bylakuppe: With just over a month until the preliminary elections for the prestigious exile post of Kalon Tripa (prime minister), a group of volunteers in Bylakuppe Tibetan Settlement have announced a major public debate, Katri Droeleng Chenmo, to be held on September 3.

At a press conference yesterday, the spokesman of the volunteer group, Mr Lobsang Dorjee, said, "Tibet's spiritual and temporal leader, His Holiness the Dalai Lama, who has attained 75 years old, has widely announced that he is semi-retired and that the major political leadership of the Tibetan Government in exile is being borne by the Kalon Tripa who is elected by the people.

Mr Lobsang continued, "Therefore the Kalon Tripa had not only emerged as the political leader recognized as the head of the Tibetan Government-in-exile but also emerged as a significant mark of advancement of Tibetan democracy and our preparation for the worst. So it is the primary responsibility of the people and the need of the hour to elect a Kalon Tripa who could fulfill the aspirations of the Tibetan people".

The organizers told the press the objective of the debate is to enlighten the public on various aspects of the forthcoming elections and facilitate the Tibetan people in making correct and enlightened decisions. The debate will afford the candidates the opportunity to explain their agendas, policies and leadership plans.

Mr Lobsang added that, "At this critical moment, when Tibetan democracy and the struggle have reached a historic threshold, copious debates were being held in Tibetan communities the world over on the issue of next Kalon Tripa.

"However, so far, Bylakuppe settlement, which boasts of having the largest contingent of diaspora population did not have the privilege of hosting or savoring a public debate on the next Kalon Tripa on a scale that involves major Katri candidates.

"Therefore we deem it highly crucial to provide the people here an opportunity to listen to our prominent leaders express their opinions and debate key issues that matter most to them and the struggle at large.

"Our democracy is strongest when our leaders are accessible and participate in an open and honest discussion about various national issues. As such, the participation of the Kalon Tripa candidates in our debate is a strong testament to their commitment towards promotion of democracy and an accountable government."

Finally, Mr Lobsang said the volunteers organising the debate would disband at the event's conclusion.