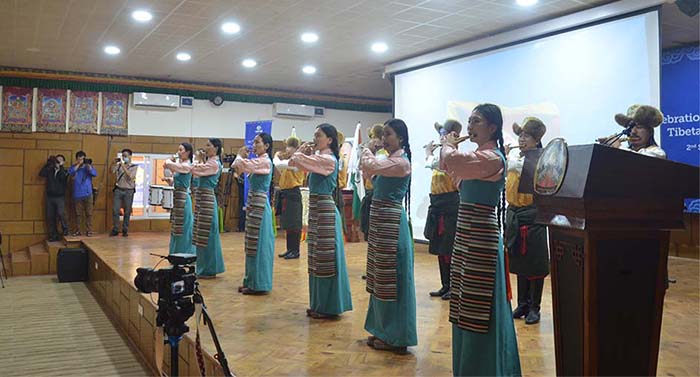 Dharamshala, India — Tibet, the roof of the world, is a country known for its unique culture that was not built in a day. The exchange and mutual absorption with other national cultures have led to the unique culture we can observe today. It has overcome a number of obstacles to survive and the Tibetan community is working to preserve it in an ever-changing world.

Geographic conditions, neighboring cultures, and the religion followed in Tibet are the three main factors that contribute to the unique individuality of the Tibetan culture or "Tibetan Buddhist culture", as His Holiness the Dalai Lama likes to put it.

First, geographically, Tibet is a remote and isolated region, rendered to some extent by the surrounding mountainous terrain. Although the neighboring cultures have often influenced it, certain aspects of the local culture remain purely unique to Tibet to this day.

When it comes to the influence of surrounding cultures, Tibet shares borders with India, Nepal, and China. India and Nepal have a number of Buddhist groups that have influenced Tibetan forms of Buddhism in a number of ways. However, Tibet is the only country that has been able to develop this culture into a fully functional Buddhist Culture in the past. When it comes to China, this influence is of a different nature. It poses a threat to Tibet's Buddhist culture and community values.

Buddhism is a Tibetan religion that has played an important role in shaping a unique Tibetan culture since its introduction in the seventh century. The peaceful union between religion and politics is one of the most distinctive features of Tibetan culture. For many countries, such as India, religion has been used for ulterior political propaganda. But Tibetan culture shows the union of religious teachings and politics for the purpose of greater benefits.

There are three main factors that contribute to this threat.

Secondly, the Imposition of socialism in Tibet. Tibetans and Chinese people living in Tibet today are bound to abide by the Chinese rule, but Tibetans in exile have supported and developed a democratic form of administration. The concepts of democracy or even theocracy are very different from socialism. Socialism has been imposed over the Tibetan community against its will and without its support. Some aspects and customs followed in Tibetan culture do not align with the socialist and communist principles of the Chinese. That is why attempts have been made to eliminate and alter the Tibetan culture by stripping away its original aura. And lastly, modernization and impact of communication media. Journalists cannot express the truth freely, activists cannot fight for their rights, monks cannot promote their teachings, Tibetans inside Tibet cannot communicate with their family members or relatives abroad, artists cannot practice their art. People are living under this constant fear that is jeopardizing the future of Tibetan culture. Culture exists because it is practiced and owned by people but if people are under this constant pressure how will they express themselves through the culture.

How Tibetans in exile try to preserve the culture

For Tibetans living in Tibet, preserving Tibetan culture is a tough challenge. If they try to practice certain elements of their culture that are not "accepted" by the Chinese authorities, their lives are at risk. However, Tibetan communities around the world are united by their principles, and Tibetans have great respect for their culture. As a result, Tibetans living in exile attempt to protect the culture and ensure its long-term survival.

Mcleod Ganj is a beautiful place in Dharamshala, India where Indians and Tibetans live together. It has also been called 'Little Lhasa' because of the large Tibetan population and the prominent Tibetan culture. The Tibetan Government in exile is also located here.

The Chinese invaded Tibet in the late 1950s and established control over the land that belonged to Tibetans. The Chinese invaders saw it as nothing more than a resource and wanted to take advantage of it. Tibetans started leaving the land to escape for the crutches of Chinese oppression and suppression. They wanted to find a place where they could practice their own culture, speak their language, eat their food and celebrate their festivals.

Steps have been taken in the Mcleod Ganj area to ensure that generations of Tibetans in exile have the opportunity to remain true to their cultural roots. There are schools for children like the Tibetan Children's Village Schools, where young Tibetans learn the language, unfiltered Tibetan history, and religion. They believe that even small things like eating reflect the culture and help keep it alive in the future. “We are not here to force the culture on our students. We are not here to tell them ‘this is Tibet’s history, this is the religion, this is the clothes, this is the language.’ We believe that they learn from everyday experiences,” says Ms Dolma, one of the members of Tibetan Children's Village.

In addition to schooling and the Central Tibetan Administration, there is the NGO-like Tibetan Youth Congress and other NGOs dedicated to preserving the uniqueness and sacredness of Tibetan culture. Tibetan Youth Congress is the largest NGO dedicated to the creation of a free Tibet. Primarily, they have four main aims- to provide service to Tibet no matter what, promote the growth of national unity, promote and preserve Tibetan culture, and most importantly, to work under His Holiness the Dalai Lama and accomplish these goals. Tibetan Youth Congress has been successful in reaching out to Tibetan communities across the globe, for instance, they have some branches around the world.

Tibetan culture and religion focus on human qualities such as altruism, compassion, kindness, and warm-heartedness. Sadly, in today's fast-paced, business-centric world, these human and moral values have struggled to survive. Yet, cultural activists and their supporters are trying to preserve the unique culture of Tibet.