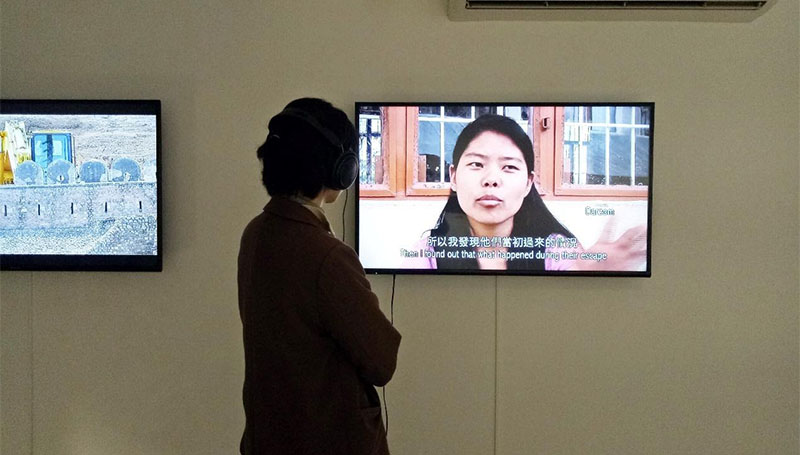 Dharamshala, India— An exhibition titled "Inside and Outside" opens in Taiwan and brings the art about different forms of Human Rights issues from December 5 to December 26, 2020. Through the discussions of borders to connect and materialise a reconciliation with broken self in the modern society by the artists part of the exhibition.

The exhibition takes place at Zone Art at Taoyuan City in Taiwan organised by Students for a Free Tibet (Taiwan) and Co-Organized by Taiwan Friends of Tibet, Niv Art and Cultural Society. Sponsored by Taiwan Foundation for Democracy to highlight the art about different forms of Human rights issues happening across the world. With eminent artists to highlight the events for better understanding by bringing the Human Rights issues closer to the international communities’ attention beyond the physical borders that restrict humans.

The resourceful artists part of this exhibition includes curator TSAI Ping-Ju, artists Rajnish Chhanesh, Tenzin Tsetan Choklay, Tenzing Rigdol, Tsering Motup, TSAI Yung-Ching, LI Kuei-Pi and Vichark K Achaar(a group name of female artist) participated to make the event more insightful. They also shared opinions on their respective topics to bring out the corpus of the Inside and Outside theme of the exhibition. The participants touched topics such as border, transborder and diasporas at the event through discussions attempting to re-explore the possibility of achieving reconciliation with the broken self in modern society.

“Border does not just refer to physical borderlines on maps. It is closely associated with the concept of nation-state, and also includes boundary lines (boundary) and their surrounding areas, whereas the people within the territory are treated as one subject,” as mentioned in the curatorial statement.

“In the past, the knowledge and concepts related to nation-state have provided an important instrument for colonial expansion, and are once again emerging in Asia today: although the movement of decolonization has successfully expelled previous colonizers, the structure of their governance has remained and is incorporated into the basis of nation for uniting civil societies, shaping the modernized us,” further added in the statement.

“Gloria Anzaldua, in her interpretation of borders, argues that people cannot understand borders, nor do they possess the option to choose to study borders, precisely because they are living on borders. As people try to understand the world, the multiple and juxtaposed subjects have rendered people outsiders to themselves,” concludes the curatorial statement.

Rajnish Chhanesh uses his city, Delhi, as a starting point and traces its borders as well as how they have changed throughout past seven regimes to discuss this city that is in a constantly evolving process. Tsering Motup grew in the region of Ladakh near India’s border. In address, he returns to a place called “Mirror Land” in his hometown, where he connects memories of sites through physical actions and discusses the alterations of natural landscape carried out by cultural hegemonies in the name of institution and nation.

Diaspora has often taken place hand in hand with colonial history. Because of the global population flow, new communities comprising migrants, refugees, immigrant workers and transnational intellectuals have gradually formed and moved across borders. However, not only have they remained connected with their original communities, they have consistently engaged in dialogues with new places and other communities as they move.

Motup’s other work consists of three wooden chests, each containing a smartphone. The audience must view the videos played on the phones through the magnifying glasses installed in front of the wooden chests. In these videos, the artist recounts, in three languages, his experiences of moving through Ladakh, Delhi and Bangalore. In 2011, documentary director Tsai Yung-Ching was invited by the White Tara Cultural Foundation in the Tibetan community in India to organize a two-month video and performance workshop for a group of Tibetan students in exile. The script of Five Minutes originated from the discussions between the first- and second-generation of Tibetans in exile after the performance was presented by the workshop participants in the community. Tenzing Rigdol, in order to realize his father’s dying wish of returning to the homeland, shipped twenty tons of Tibetan soil to Dharamshala, India. The journey was filmed and produced as a documentary by documentary director Tenzin Tsetan Choklay.

Technological tools are also an important medium for the movement, cohesion and communication of communities. Li Kuei-Pi’s project records the footprints of stateless people as they travel across national borders. The artist creates a fictitious transnational travel agency called “TransBorder,” and utilizes fake postcards to restore the informal economic network produced by the movement of those who are stateless. Mahila Zine was founded in 2018. The term “mahila” means “woman” in Hindi. Issued by artist collective “Vichark K Achaar,” the publication collects and reveals diverse voices of women around the art group. In addition to showcasing all the issues published since 2018, the exhibition will also include Vichark K Achaar’s online exhibition on the website of Young Art Criticism International (YACI).