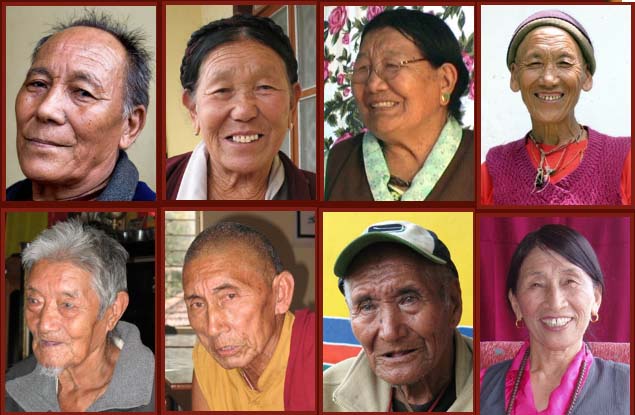 San Francisco, California, USA (March 1, 2010) - "I have been waiting my whole life to tell what happened in Tibet," declared an 82 year-old Tibetan refugee after meeting with Marcella Adamski, Ph.D., a clinical psychologist working in San Francisco's Financial District, who is working to record the life stories of exiled Tibetan elders.

Dr. Adamski explained that, "When I met with His Holiness the Dalai Lama, I asked what could be done to help the people of Tibet. He emphasized the vital importance of recording the life experiences of older Tibetans in exile, who both witnessed and endured the invasion and occupation of Tibet by the Chinese. She added, "The Dalai Lama urged that the elders be interviewed before they pass away and their stories are lost forever."

In response to this, Adamski founded a non-profit organization in 2003 called the Tibet Oral History Project, which has videotaped 85 elders' eyewitness accounts to date. In an effort to preserve as many oral histories as possible, Adamski will travel this April to Dhoeguling Tibetan Settlement in Mundgod, a Tibetan refugee town in southern India nicknamed "Little Tibet." Adamski and her team of Americans and Tibetans plan to videotape over 50 interviews with elderly Tibetans in Dhoeguling.

When H.H the Dalai Lama was forced to flee Tibet in 1959, an estimated 80,000 Tibetans followed their spiritual leader into exile in India, where most still live. The Project's interviews document both the memories of the refugees' lives in Tibet before the occupation, and their accounts of the Chinese invasion and the hardships of life under foreign rule.

Adamski described, "The refugees that we interview come from diverse backgrounds - nomads, farmers, housewives, traders, monks, nuns and community leaders. After the Chinese invasion of Tibet, many of them became political prisoners, forced laborers, and even resistance fighters. Now, at the ages of 80 or 90, these refugees are the last generation who can describe what it was like to grow up in a free Tibet."

Film footage and printed transcripts of 25 of these interviews are currently available on the Project's website. The complete oral history collection will also be provided to Tibetan archives and international research libraries. In addition, Radio Free Asia's Tibetan Service is broadcasting interview excerpts worldwide, even in China, on their weekly "Life in Exile" radio show.

Radio Free Asia's Senior Editor, Benpa Topgyal, explained, "I feel it is as important for the present and the future generation of Tibetans to know their forefather's legacy as it is for the Chinese to understand Tibetan issues from an angle and source other than the official Chinese government propaganda."

Many Tibetan advocacy groups around the world have shown their appreciation for Dr. Adamski's work. Dennis Cusack, a San Francisco attorney and Co-chair of the International Tibet Support Network, stated that, "The Tibet Oral History Project plays a crucial role in the Tibetan struggle for freedom. Hearing these interviews, younger generations of Tibetans can bind themselves even more tightly to the Tibetan identity that they and their elders are fighting to preserve."