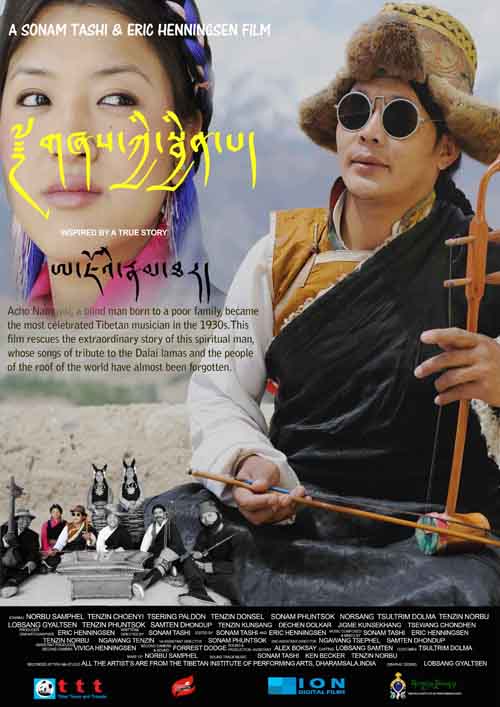 Dharamshala: A new documentary about the life of blind Tibetan musician Acho Namgyal received its world premiere on February 20 at the Tibetan Institute of Performing Arts, Dharamsala, India. Director Sonam Tashi spent two years filming in the US, Switzerland and India to tell the story Acho Namgyal and the roots of the Nangma and Toeshey genres of Tibetan classical music.

The 80-minute documentary was edited from more than 15 years of research and ten hours of eyewitness accounts and professional commentaries. The film features authentic costumes, Lhasa dialect and culture, with location filming in Ladakh to stand in for Tibet.

"I began to collect music, stories from musicians, interviews with artists, and audios and videos of Tibetan music in the late 1980s," said Sonam Tashi. "I was very fortunate to be able to interview the late Maja Tsewang Gyurme, Sampho Rinpoche, Nornang, Sholkhang Sonam Dargyal, and Tashi Tsering, whom I call Tibetan treasures.

"From them I gathered wonderful stories of the Nangma and Toeshey music festivals, the aristocrats' banquets, picnics in Lhasa's many parks, and of musical jam sessions with Acho Namgyal."

A few years ago, Sonam Tashi co-founded the group Nangma Boekyi Solgyun Rolyang and toured North America. The tour was intended to educate the younger generation and to remind elders of the good old days of the past.

"Throughout this tour I met many Tibetan youths who took an interest in singing Nangma and Toeshey," said the director. "This persuaded me that I should seriously try to do some concrete work in promoting and preserving these particular genres."

The film features actors from the Tibetan Institute for Performing Arts, Dharamsala, and was funded by a grant from the Galen and Barbara Rowell Fund, administered by ict and film-makers Eric and Vivica Henningsen.

For more information on the film and the music, visit www.achonamgyal.com and www.nangmatoeshey.com