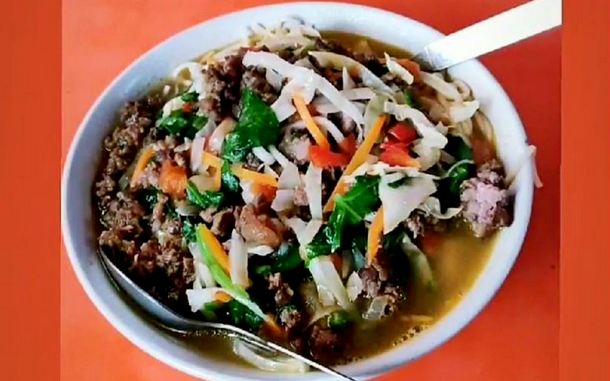 Dharamshala, India — Thukpa is a very popular dish in the Indian subcontinent, with its origins tracing back to centuries when Tibetan people consumed it to keep themselves warm in sub-zero temperatures in Tibet. Today, it has become one of the most appealing immigrant foods in India along with momos.

The credit for this must go to Tibetan people who carried their cuisine along and popularised it in a way that today it is a comfort food relished across India. Thukpa is a hot watery broth (soup) with noodles, vegetables, meat (preferably mutton or yak meat) with garlic and ginger used as seasoning; in addition, it is served with fiery red chutney made from chillies and garlic. The dish today has spread to various parts of South-East Asia from India to Nepal to Bhutan with variations of different kinds depending on the region.

In Bhutan, the dish is also called dehthuk, while its preparation varies from the fact that beef is also used as a substitute to mutton or yak meat. Elsewhere in Nepal, the taste of the dish is heavily influenced by Indian tastes and therefore it also contains chilli powder, masala which makes it hot and spicy with a dominant Indian curry flavour.

In the Indian states of Arunachal Pradesh, West Bengal and Sikkim, Thukpa has become immensely popular because of their close proximity to Bhutan, Tibet and China which suggests why the dish has made deep inroads into the eating habits of the community living there. In India, another variant of Thukpa that is popular is Thenthuk, which is adding momos to the vegetable broth (soup).

My first experience with Thukpa has indeed been gastronomically satisfying. Thukpa is warm, healthy and has high nutritional value owing to different varieties of vegetables put in its preparation. Its broth (soup) is an essential ingredient which helps in keeping people warm in extremely cold temperatures.

The word tsampa in the Tibetan language stands for ground–up roasted barley flour. Tsampa consumption can be traced back to centuries when it was revealed that there have been barley traces found in the Tibetan plateau. There are various ways of consuming it such as making it into a bowl of cereal, mixing it with yak butter and tea to make energy balls. Apart from consumption, tsampa also has other benefits such as, it helps in healing of wounds which can be done by mixing it with other herbs and making it into a poultice (taking dried or fresh herbs wrapped in a piece of cloth and apply on the skin). Since tsampa is made from barley, it also has additional health benefits such as; it helps in lowering blood cholesterol levels and is a rich source of vitamins such as vitamin B and vitamin E.

It has a characteristic nutty taste and smell and is very healthy. For more than eight million Tibetans, living in Tibet and around the world, it is, along with meat and milk products, their basic food. Almost every pilgrim and traveller in Tibet carries a stock of tsampa on their journey. Tsampa is also found in Nepal, Bhutan, China, India and other parts of the world with different names. For example, in Turkmenistan, it is called talkhan and in some parts of China, it is called tso-miyen. In India, in the state of Bihar, tsampa is made from chickpeas and called sattu.

Over the last century, tsampa has become a symbol of Tibetan identity and a tool of protest for Tibetan people. In the 1950s when China started its annexation of Tibet, there was a lack of politically unifying force among Tibetan people that could pose a challenge to Chinese. Hence, for this purpose tsampa was seen as something that cut across all Tibetans living in Tibet, whether rich or poor, old or young, everybody was united by tsampa and soon it was soon adopted as a symbol for Tibetan people against the struggle by activists.

In 1952, the Tibet Mirror published an article calling for revolt against the annexation and it said, “We, the tsampa eaters, chuba [traditional Tibetan outerwear] wearers, dice players, raw and dried meat eaters, followers of Buddhism, Tibetan language speakers...we must make the effort to end the [Chinese] occupation."

Later in 1956, the Mirror again published a series of articles urging Tibetans to “unite” and “stand up” against the invasion. These articles were instrumental in what culminated into the 1959 Tibetan Uprising, when thousands of Tibetans gathered in the capital city of Lhasa, calling for Tibet’s independence from China and later mobilizing forces to fight the regime.

Several years later in 2008, in a series of protests Tibetan monks rallied the call “uniting all tsampa eating Tibetans”. In 2012 protesters ate tsampa and threw it up in the air during a mass prayer, at different rally monks protested by eating tsampa and chanting mantras in protest. So important was tsampa to these protests that the modern-day Tibetan resistance movement often goes by another name online: The Tsampa Revolution. Tsampa has also found its way into Tibetan political music and youth culture. In 2012 the rapper Shapaley, who spent his childhood in Tibet, released a song called "Tsampa" on YouTube. In this video, he is seen carrying tsampa in a bag and having butter tea.

Tsampa: The Tibetan Cereal That Helped Spark An Uprising