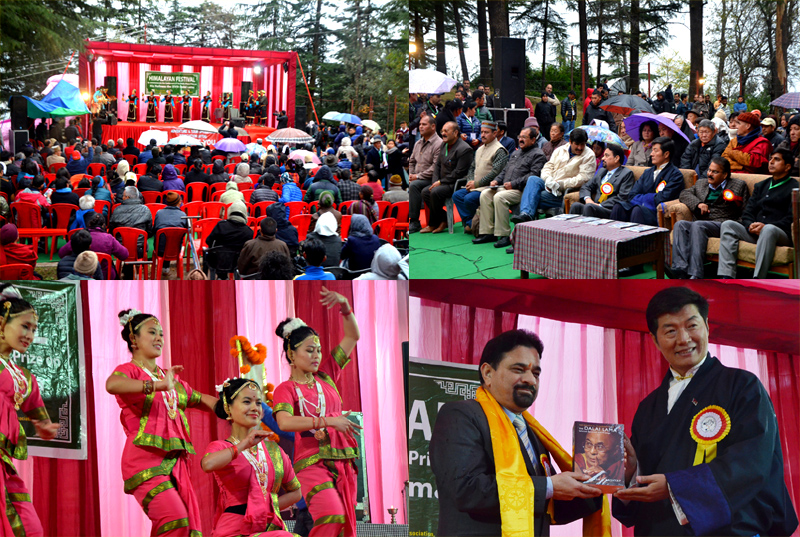 Dharamshala — A two-day 20th International Himalayan Festival held McLeod Ganj, India, to mark the 26th Anniversary of Nobel Peace Prize on His Holiness the Dalai Lama. The event was attended by hundreds of Tibetans, local Indians, and foreign and domestic tourists.

The crowd who came to witness the grand performances of traditional folk dances and songs that were on display at the Hotel Bhagsu Hotel ground, to honor His Holiness for his noble deeds.

Addressing the event, Dr Sangay underlined the strong bonds of friendship and affinity shared by the people of Himalayan regions particularly the Tibetans and Indians. He called for the need to maintain these bonds and expressed the wholehearted participation and cooperation from the CTA for the same.

Sikyong also expressed gratitude to the state and central government of India for hosting the Tibetan people and His Holiness the Dalai Lama for the last over five decades.

"Since the occupation of Tibet by China in 1959, the Indian government has graciously hosted the Tibetan people in India. We are deeply grateful for the help and hospitality provided by India in our time of trial and tribulation," he said.

Dr Sangay praised His Holiness the Dalai Lama for choosing the Himachal Pradesh as a place for Tibetan refugees to live. He also urged Tibetans to work for the peace, while making the community, to ensure that making environmentally friendly.

Sarween Chaudhary, former minister and MLA from Shahpur, who was the chief guest at the official event the main temple, explained that the two countries share religious, cultural and linguistic connections, and described Tibet as a sacred place for Indians.

Emphasising the centuries-old bonds of friendship shared by Tibet and India, Chaudhary also encouraged the two-communities a mutual respect for each other's traditions and languages.

Explaining the Tibetans are became part of Himachal Pradesh, Mr Thakur said will support the Tibet and its cause. He also expressed his hopes that Tibetans will be able to return to their home one day soon.

Speaking on the festival, the Speaker of the Tibetan Parliament in-Exile, Mr Tsering in his speech said this festival is also symbolizing "the bond of unassailable friendship between the Tibetan people and the local Indian people."

The festival was started in 1995 to commemorate the international recognition of His Holiness the Dalai Lama's peace initiatives with the prestigious Nobel Prize for peace on 10 December 1989.

The organizers say "it is aimed at bringing different cultures and people across the Himalayas on a common forum, and foster understanding, appreciation, exchanges and dialogue among the people of the region."