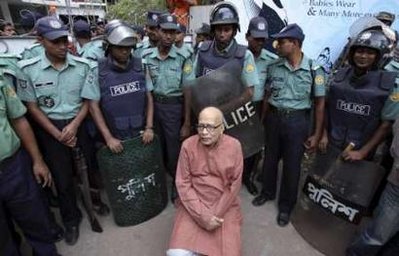 Jointly organised with the Bangladesh branch of Students for a Free Tibet, the exhibition titled "Into Exile, Tibet 1949-2009" was to display pictures of Tibetans who had fled their homeland because of Chinese rule.

Shahidul Alam, who set up the exhibition, said the gallery doors were locked by police officers. "Chinese embassy officials had earlier come to meet me and requested (that we) cancel the show," he explained.

Police chief Shah Alam said they closed the exhibition on "orders from higher authorities," whilst Mohammad Imran, spokesman for the Bangladesh foreign ministry, said, "The Chinese ambassador called on our foreign secretary and formally expressed concern over the exhibition."