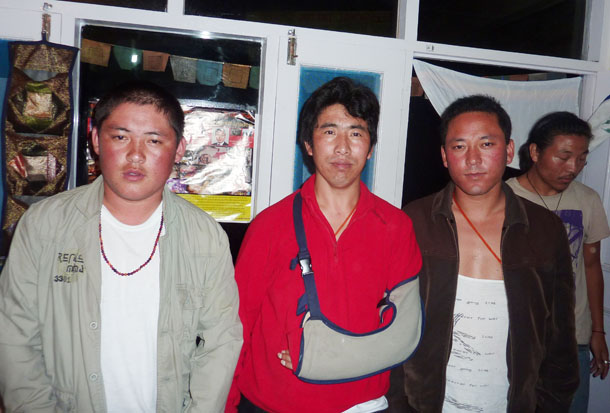 Dharamshala: I feel guilty about the ease with which I can disregard and justify the oppression of a nation.  Let me explain:  I grew up in Canada and completely took for granted the fact that I would live with my own family, be unconditionally taken care of, provided with equal and limitless opportunity, and that was that.... doesn't everybody? No, not if you’re Tibetan. Not if you live in Tibet. I mean, I remember hearing about Free Tibet concerts, and have known quite vaguely that, well, maybe there was a problem far away in some mountainous region.

Perhaps it became background noise as I filtered incredibly real and devastating issues through my urgent and all-encompassing, shameless lust for material wealth, and desire to absorb as much comfort—check that—more comfort than the guy next to me.  I am now a lot older though, so world pressure, the press and media surrounding His Holiness the Dalai Lama, or at the very least the United Nations must have resolved this little issue?  To the dismay of a whole nation, and despite world knowledge as well as apparent sympathy for Tibetans’ situation, this is not the case.

Tibet and its people continue to live in violent oppression.  It appears that China has mastered the art of propaganda on the world stage.  As good as the Chinese are at  diverting global perception and powerfully clouding appearances, visiting Dharamsala, the site of the Tibetan Government in Exile, as well as talking with many Tibetan refugees, is a tragic lesson in real life, and an unforgettable exhibit of courage and perseverance.

Dhondup tells of the peaceful protest he attended in March 2008, in Karze county, Eastern Tibet. His chilling account of the events that followed defies one’s sense of decency. He states, "When I arrived, it was evident that the police force had opened fire on the 200 laypeople and 300 nuns present." Amid the chaos, Dhondup noticed Kunga, a 20 year old monk, who had been shot by the Peoples Armed Police (PAP) and was unable to move. He describes, "I saw his body lying on the ground and…rushed to try to save him. I was then shot, once in my hand and once in my back." In a matter of seconds Dhondup's world changed forever, his struggle for freedom exchanged for a struggle for his very existence. The Chinese have an efficient way of achieving this. Narrowly escaping, with the help of his brother Lobsang Thupten, a barely conscious Dhondup and the monk he was trying to save fled to the mountains.  Kunga, the 20 year old monk, did not make it past the second day.  For the next year, the other fugitives lived in constant peril. Dhondup remembers, "My wounds soon became infected and infested with maggots. We had no access to medical care. The pain was unbearable: I came close to committing suicide. My brother risked his life to obtain medicines from a nearby village. On the way, he was subjected to extreme cold and suffered frostbite. We lived like wild animals – Tibetan people in their own land."  Dhondup's last statement will stay with me forever.

My naive questions were answered with dignity and in detail.  While listening, I kept thinking to myself, “How would I deal with the knowledge that my family was most likely being tortured or imprisoned on my behalf, while never being able to contact or help them?” Never—this just does not compute.  I am gratefully able to say that as much as I try, I can not conceive of these nightmares. Realizing their fate, Dhondup and Thuptens strove not only to survive this unmentionable tragedy, but to perservere long enough to share their stories with the world and provide irrefutable proof of what really happens in Tibet. "I survived my ordeal in the hope of appealing to the international media to visit Tibet, despite the limitations imposed upon reporters. You will shed tears for the miserable livelihood and unbearable suffering endured by the Tibetan people,” explains Dhondup.

I am a very lucky person to have been exposed to such real, unconditional acceptance and purpose. Tibetans are a wonderful people.  Not once did anyone ask the question, “Why me?” when faced with unjust hardships. Instead, they have taken it upon themselves to help their fellow Tibetans persevere, whatever their role.  Every Tibetan soul strives for one common goal, freedom.  Lead by His Holiness the Dalai Lama, they live with hope, as do I, that somehow, some way, the entire world will wake from its slumber of indifference and finally put an end to China's arrogance.