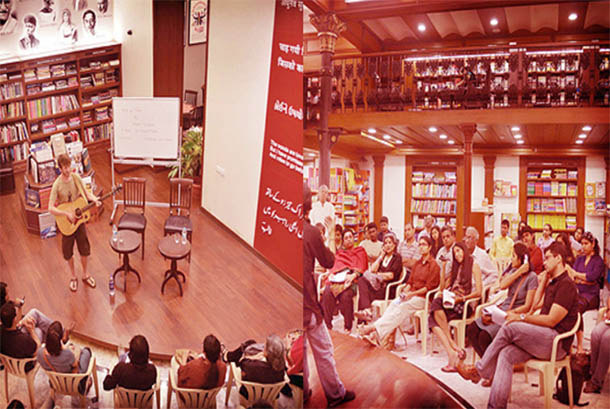 Mumbai, India: -Nitesh Mohanty of The Root - a company that platforms artistic expression with a social agenda - reports on 2 Days for Tibet, a cultural evening he organized in association with Friends of Tibet, which ran from November 9 to 10 at the Tata Institute of Social Sciences, Mumbai.

The evening kicked off on a musical note with Billy Salisbury - AKA Undercover Hippy - who sends messages of love, peace, equality, justice and freedom through his music.

Billy dedicated a couple of his songs to Tibet (and to the mindless world of war and hatred that we live in).

His songs provoked us to look within rather than blaming the world outside for the wrongs around us.

The stage was set for Tenzin Tsundue to take us into the pages of Kora - the seventh edition of his hand-stitched book of poetry.

Tsundue began with stories of the Chinese nationalists who escaped the wrath of the communists before settling down as the noodle sellers of Kalimpong.

He spoke about the Tibetan refugees, who would often camp in Bombay, selling woolen sweaters during the winters.

He remembered the Bombay of his college days, when his decision to move to this metropolis was "an act of rebellion".

Tsundue attributed his interest in poetry to the literary greats like Adil Jussawalla, Nissim Ezikiel, Arun Kolatkar, Ranjit Hoskote, Dom Moraes, Jerry Pinto and Dilip Chitre, who inspired and shaped the writer in him.

Tsundue read out three poems reflective of life as a Tibetan refugee. He closed the session with an unpublished poem about the Tibetan new year - Losar - recollecting the feelings of agony and ecstasy that come around every year.
The poem conveyed hopes and expectations, trials and defeats, the mundane and the memorable.

During the post-reading Q&A, Tsundue eloquently answered questions about the Tibetan struggle for freedom, and spoke on the new prime minister's stand within the democratic community of Tibetans living in exile, how news trickles out of the heavily guarded walls of the ‘roof of the world', and the vital role India could play in securing its future with Tibet as its neighbor, as opposed to China.

The evening could have easily stretched into the night, but we had to draw curtains across the venue's wide red walls, on which was written, "The woods are lovely, dark and deep, But I have promises to keep, And miles to go before I sleep."

There couldn't have been a better metaphor for Tsundue and the Tibetan struggle for freedom.

We wrapped up the session by selling copies of Tsundue's Kora and Undercover Hippie's album Why We Fight.

Screening Of The Sun Behind The Clouds

By the time we were ready to start our film screening on the second of our 2 Days for Tibet, we had a packed room with no place to move. I read out the director's note, written by Ritu Sarin and Tenzing Sonam.

The letter raised concerns about the current situation in Tibet, and requested that everyone come together in support of Tibet's struggle for freedom.

The viewers - students from the Tata Institute of Social Sciences - were generally not very aware of the Tibet issue, hence the film was a revelation to many. They watched it with surprise, shock and disbelief.

After the screening, everyone was eagerly awaiting to hear from Tenzin Tsundue, who spoke about the Tibetan struggle from the time the film was made - in 2008 - to the present day.

He recounted the recent acts of self-immolation by young Tibetan monks and nuns, and the desperate call for international help and attention from the ‘roof of the world'.

Tsundue also spoke on the path of non-violence as a method of wearing China down.

To conclude the event, Friends of Tibet and The Root campaigners distributed reading materials on Tibet, to help the students understand the realities of the country's social, cultural, environmental and historical significance.