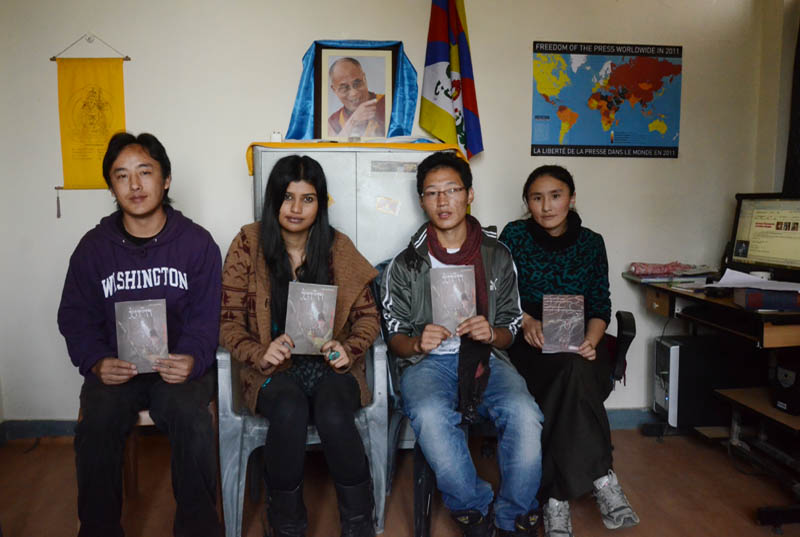 Dharamshala: - It has almost been a year since Gendun Tsering, a 24 year old environmental activist and writer, fled from his motherland and staggered through the Himalayas to India, the seat of the Tibetan Government-in-exile.

Last year, the Chinese government arrested 5 Tibetan writers for being linked to "banned" writings and "anti-government "writing. Gendun, originally from the Tibetan town of Serdeu and a monk of the Rongtha monastery in Khyungchu County, escaped to India upon being threatened by the Chinese authorities for writing an inflammatory article in a Tibetan cultural magazine.

A close friend of Gendun's, Tsering Dhondup, was arrested for acting as an accessory, helping Gendun publish his first two pieces of writing Tears and Alive Eye (‘Migchu' and ‘Sonmig'), which included a collection of articles that shone light on the horrible realities inside Tibet.

In 2009 Gendun Tsering himself nearly 3 months in prison in the province of Kham. It was during this time that he began journaling and coming up with ideas for his writing.

‘Ghost-Fire", as Gendun has been nicknamed, sat down to give the Tibet Post a heartfelt account of his hardships and illustrate the story and sentiments behind his latest book, "Ghost Writer".

"Ghost Writer" is a book about the four stages of a fugitive's journey, a written account of Gendun Tsering's escape to India through the cold, intimidating terrain of the Indo-Tibetan Himalayas. The four chapters are entitled- Struggle, Parting, Travel and Love.

In his first chapter, Tsering illustrated the struggles of living as a refugee, and how he felt it his obligation and birth-right to stand up for his country, and uphold the truths of Tibet. In Parting, he expresses his grief at having to leave his family, his friends and his motherland. He explains the conflict of not wanting to part with them, but at the same time, not wanting to "die under the soles of their (China's) feet".

The third chapter, ‘Travel' paints a picture of the road out of Tibet, lined with police, soldiers and checkpoints and how his people shuddered to take this road, because too many that took it never returned.

In the last chapter, Tsering writes about love being an integral and sacred part of his life, that he would never misuse it or consider it a "game" or recreation. He says that he wishes that one might use their life to preserve love, and that he might have the strength to do the same.

"Ghost-Writer" began as a diary, written by Tsering during his journey through the Himalayas to India. When he arrived in Dharamshala, he secured the support of Pen International, through Reporters Without Borders and The Tibet Post, and published the book. Copies were distributed in monasteries, schools and universities in 4 main (Chinese) provinces in Tibet. He also distributed copies to TCV schools, including Suja School, in Dharamshala. Anyone interested in buying the book can contact the Tibet Post or the Suja School.

At the moment, Tsering is completing his studies in the Suja School, while also having completed his third book, entitled "Ghost Truth". He describes it as a creative representation of the people and the world in which he was born. Due to a variety of financial and time restraints, he has not yet been able to publish it, but implores that Tibetan readers inside and outside Tibet support his endeavors.

Gendung Tsering is one of numerous examples of the Chinese crackdown on Tibetan culture and the resilience of Tibetan spirit despite it. In an earlier interview with the Tibet Post, he spoke about the issue of freedom of expression in Tibet, saying, "We are free to write about anything except for issues of national or political character. When it comes to those issues we are not able to write the truth in any form be it newspapers, blogs or elsewhere. We have no freedom in that regard."

He also added "In Tibet we have many problems, but I think only about 30% of those problems gets across the border to reach the international news."