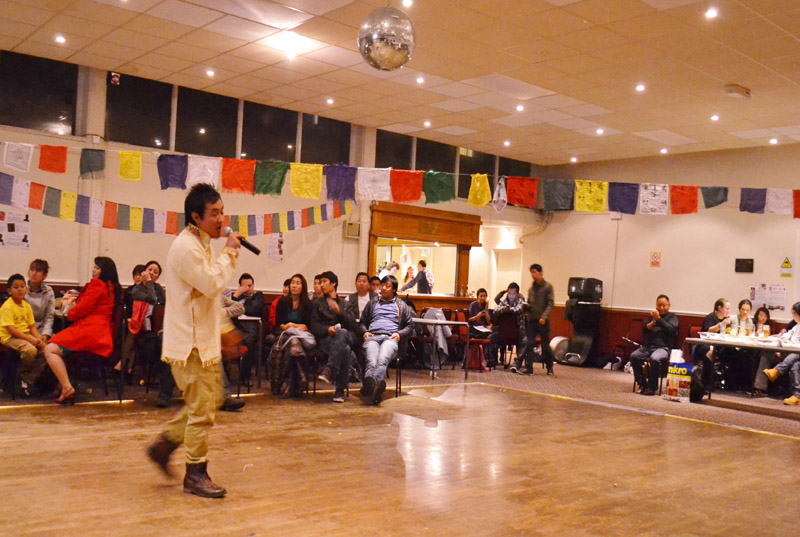 London: The soaring melodies of Tibetan folk music have blessed not just the ears of those living in the land of snows. The Tibetan community in exile based in London have been fortunate enough to enjoy the rich vocals and melodic harmonies of Tibetan musicians, with performances by a trio of Tibetan performers, who have all come from Eastern Tibet's Amdo region.

Thrinley, Ngawang and Pasang all currently reside in London, and despite the cultural differences, and geographical distance, have managed to bring a little bit of Tibet into the hearts and lives of those also living in exile.
During a hugely successful Tibetan Nomad Benefit concert in East London's Charlton, the trio performed three pitch perfect songs to a rapt audience.

The songs are composed by Thrinley, a London-based Tibetan, and their music is dedicated to those who sacrificed their lives for a free Tibet, and for the return of the Dalai Lama to his homeland.

In Tibet, due to the rule of Chinese law which bans the use of naming His Holiness the Dalai Lama or speaking of such religious notions, the Tibetan people have found they cannot sing about their revered spiritual leader without breaking the oppressive law. To do so would incur severe punishment. Ingeniously however, some Tibetans sidestep this by using different words for His Holiness, or when singing about banned topics. Often words such as ‘The Sun', or ‘moon' are used instead to avoid persecution; a subtle and clever method of expressing adoration for His Holiness, or for fellow Tibetans who have suffered.

Although at the time of listening I could not understand the lyrics, when the three musicians began to play and sing, I was truly amazed at the beauty and simplicity of the songs:

Simultaneously beautiful and strong, the ancient folk sound of the music reverberated across the packed social-hall, and I almost felt transported to Tibet itself.

The use of the traditional Tibetan instrument, the DraNyenwas played superbly by Ngawang of the trio, and gave a wonderful dimension to his soaring vocals.
Ngawang also performed at two other successful events over the course of the week; bringing a little bit of Tibet to both SOAS University London, and to the 26th anniversary celebrations of the Tibet Foundation Charity event two days later, to great success.

The beautiful sounds of the land of snows managed to reach the furthest corners of the globe, inspiring the minds of its listeners, and, if you listened closely enough, revealing the truths of their plight.