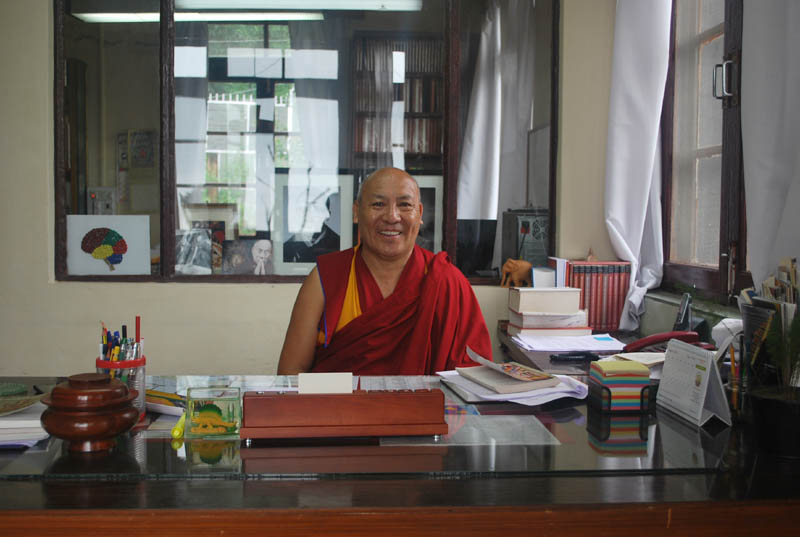 Dharamshala: The Library of Tibetan Works and Archives (LTWA) was founded in 1970 by His Holiness the 14th Dalai Lama, and the library began functioning in 1971. Buddhist and Tibetan scholars, students, researchers, and interested travelers come from all corners of the world to access this resource. Ms. Colleen McKown, a staff writer of The Tibet Post International (TPI) talked with Ven. Lhakdor, the director of LTWA.

The institution undertakes the research and translation of various texts related to the library's activities and to Tibetan thought; offers classes in Buddhist philosophy, Tibetan language, Hindi language, and literature; and seeks to educate monks and nuns in scientific findings.

His Holiness the Dalai Lama has said that while millions in Asia follow Buddhism, Tibet is perhaps the only place that can "carry into real practice the subtle and profound meanings of Buddhist philosophy and culture." (ltwa.net).

"The great responsibility of the preservation, dissemination and continuation of this unique culture and philosophy of Tibet has devolved upon the shoulders of the Tibetan people. It is to the partial fulfillment of this great responsibility that the establishment and functioning of the Library of Tibetan Works and Archives assumes a work of utmost importance," His Holiness said.

One major, unique initiative the Tibetan Library has undertaken is their Science Education Program. This program was started by His Holiness the Dalai Lama in 2000, and it seeks to educate monks and nuns in Western science. His Holiness' vision is that one day, science will be taught at all Tibetan Buddhist monasteries.

Since a young age, His Holiness the Dalai Lama has had a strong personal interest in science, and he feels passionately about the integration of science and spirituality. He believes firmly that the two often come to the same conclusions and that they are far from incompatible. He has even written a book on the topic called The Universe in a Single Atom: The Convergence of Science and Spirituality.

Science initiatives at the Tibetan library include translating educational scientific writing into Tibetan, offering science courses and workshops for monks with a deep understanding of Buddhist philosophy, and bringing Western scientists to India to teach monks about physics, quantum mechanics, biology, cosmology, neuroscience, and mathematics.

The Tibetan Library has partnered with Emory University in Atlanta, Georgia, USA in this science initiative. Six monks were recently accepted for study at Emory and are currently studying there.

In December, a science workshop will be organized for 20-30 monks, and a three-day conference on Buddhism and Science will take place in both the United States and India.

Next May, their World of Your Senses exhibit, already introduced last year, will make a reappearance. This unique exhibit, developed by a group of Buddhist monks, showcases the parallels between Buddhism and science.

In Tibetan Buddhism, Geshe Lhakdor told TPI, there is a large emphasis on coming to conclusions based on one's own knowledge and logical conclusions. He said that even the Buddha taught that all teachings, even his own, should be examined carefully and discarded if they don't make sense with one's own reasoning and logic.

Buddhist monks, for this reason, spend time extensively studying other religious traditions in order to understand the viewpoints of others regarding spirituality.

Similarly, the science initiative encourages monks to look at the world from yet another point of view, seeking synthesis instead of division.

Monks have responded well to the scientific teachings. "Even if there are challenges and conflicts,they provide an opportunity to grow," said Geshe Lhadkor.

"Science and spirituality, the material reality and the mental reality-they have to meet each other," he said.

The Buddhist doctrine of non-violence, for instance, stipulates that people should refrain from harming any living thing. Violent thoughts, said Geshe Lhakdor, have been shown through scientific studies to be harmful to health. Hence; an example of the congruence of science and spirituality.

He also cited the famous experiment in which positive phrases caused water to crystallize in beautiful shapes, while negative phrases left the water distorted and chaotic.

"We can't say, I'm just going to take care of my own. Every small thing affects people living in other parts of the world," said Geshe Lhakdor. 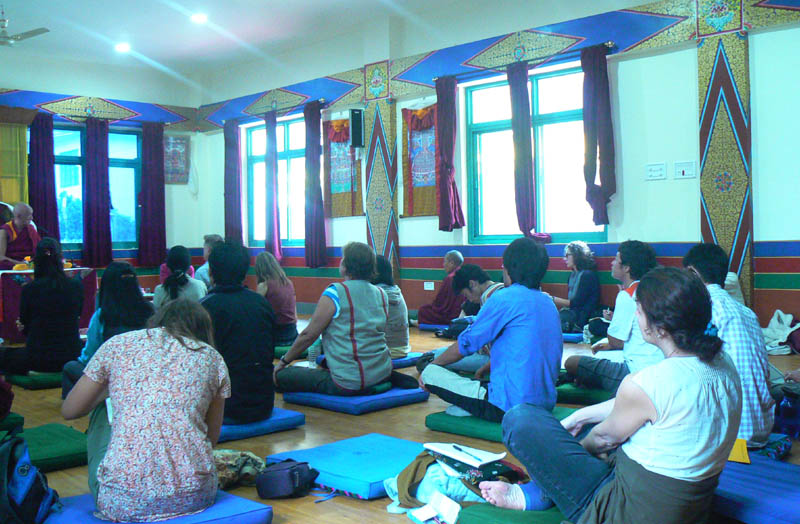 Classes cover philosophy as well as meditation, psychology, and ethics. A mix of Tibetan and foreign students attend these classes; explanations are given first in Tibetan and then translated into English.

Classes typically last about a month, and the prices range from 300 to 500 rupees for each full course. Interested travelers and locals also frequently "drop in" to a few classes.

Several Tibetan language classes at varying levels are also taught; most participants, said Geshe Lhakdor, take Tibetan because they want to get at the heart of and have direct access to Buddhist teachings.

Well-known scholars of Tibet and Buddhism such as Jeffrey Hopkins, Professor of Tibetan Buddhist Studies at the University of Virginia, USA and Allan Wallace, an American scholar who has written prolifically on Tibetan Buddhism, have studied at the Tibetan Library. Students often come with their professors.

People from around the world are drawn to studying at the Tibetan Library. Geshe Lhakdor said the most participants come from America, followed by Canada and Australia. Visitors also hail from Europe as well as from eastern countries such as Japan and Taiwan.

When asked why people from western countries have such an interest in Buddhism, Geshe Lhakdor replied that westerners "have the freedom to ask anything they want. Buddhism is logical. It is the science of the mind. It is a way of pursuing happiness."

"Everyone should get something out of the classes. The classes are small and they have good translators and many teachers." However, he clarified, "those who drop in [for just a few classes] may not get all their questions answered."

Ruth Sonam, from England, has been living in Dharamshala and studying Buddhism since 1976. She translates for Geshe Sonam Rinchen (no relation to Ruth). Educated at Oxford in Modern Languages, Ruth originally encountered Buddhism in London.

"I felt very drawn to the teachings I heard, and later decided to come here to India to go on pilgrimage," she said. She came to India first in 1971, when the Tibetan Library had just opened in Dharamshala. She first studied in Dharamshala from 1971-1973.

"It was very beautiful then, very real," she said.

But there were also challenges. "It used to take four days to make an international phone call because you had to book it...you know, no Skype!" she laughed.

Over the years she became more educated in Buddhist doctrine, learned to speak Tibetan, conducted translation work and dreamed of one being the translator for the classes. She thought it would be great "to be that bridge."

In 1989 there was an opening, and she realized her dream of becoming a translator for the classes. She has been translating for Geshe Sonam Rinchen ever since.

She describes a powerful experience she had during her first time in India in 1971. While attending an empowerment ceremony at a nunnery near Trilokpur, "there was this lovely incident where a monk lit a stick of incense during the empowerment. Somehow the smoke went up his nose and he started spluttering and coughing...everyone just laughed. And I thought, this has got to be good. This is so different from the Poe-faced, mournful experiences of religion that I have had. If people can laugh then there is something good about this."

About the teachings, she said that Geshe Sonam Rinchen advised visitors to "take from it what will enrich your life. If you want to become a Buddhist that's great, but even if you are a practicing Christian and you hear something that's useful [you can take that]."

Mary, a participant from California, USA, has been studying Buddhism for years but says that she "still gets a tremendous amount out of the classes."

"They make it so personal," she said.

Another particpant, Emilia, from England, said that she is returning to the Tibetan Library after first coming in the beginning of the 1990s.

She feels that the setup and content of the classes is much the same as it was on her first trip. She is also thankful that the classes have been "set up with a nominal price. They're meant for people who can come and study for a long time. It's great that the cost is affordable, I hope it stays that way."

Translation projects involve both Tibetan-English and English-Tibetan translations. The library offers three-month translation classes, during which a mix of monks, Tibetans, and select foreigners learn the art of translation from Library Director Geshe Lhakdor. Geshe Lhakdor has years of experience in translation, as he has served as the official translator for His Holiness the Dalai Lama.

Most participants have university degrees and some prior experience are translating, but some are "just talented," Geshe Lhakdor said.

"Much of the purpose is to activate young boys and girls, to help them understand through translating people's thoughts," he said.

Geshe Lhakdor believes that translation can serve to develop "holistic knowledge and awareness. We want to put the energy within, to put fire in the soul and mind. This creates sensible people," he said.

His main goal in this project is to create in people a desire to serve the greater community rather than just themselves.

Speaking about the importance of having complete awareness about situations, he used the Tibetan situation as an example. Many Tibetans have been killed, he said. While the environment and the culture are being destroyed, he said, "you cannot be a spectator."

Other upcoming projects at the Tibetan Library include a two-week workshop on oral history, taught by Prof. Amia Lieblich from Israel, and the archiving of the teachings of all past Dalai Lamas.

Part of the Oral History workshop will be about preserving the knowledge and memories of elderly Tibetan people.

The project involving the past Dalai Lama's teachings has made good headway, as the translations of the 1st, 2nd, and 5th Dalai Lamas is complete.

When asked to articulate the vision of the Tibetan Library, Geshe Lhakdor said first of all that "vision without action is a nightmare."

"Our reality is a shortage of funding," he said, so the library must work now with a "small vision." The library seeks to "ensure that Tibetan culture and religion is preserved and disseminated for the many who are interested," he said. "We preserve Tibetan culture not because it belongs to Tibetans, but because it is still so relevant today and because so many are interested and so many benefit...our aim is not to convert, but to help and support those who are interested."