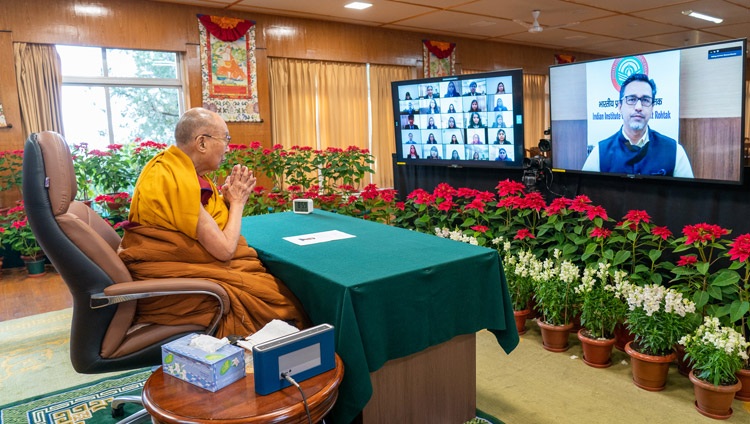 His Holiness the Dalai Lama with Prof Dheeraj Sharma, Director of the Indian Institute of Management, Rohtak, on December 23,2021. Photo: Tenzin Jamphel

Dharamshala, India – “We must pay more attention to our thousand-year-old tradition of Ahimsa and Karuna. The tradition of non-violence and compass can teach the world a path of tolerance, thoughtfulness, and compassion,” said His Holiness the Dalai Lama while interacting with the students and faculty of the Indian Institute of Management (IIM) Rohtak.

His Holiness the Dalai Lama gives a talk on Facing Challenges with Compassion and Wisdom to Indian students and teachers on December 23, 2021. The talk organised by the Indian Institute of Management (IIM) Rohtak and followed by a question and answer session online from his residence in Dharamshala, HP, India.

During the event, he interacted with students and staff via video conference and expressed his delight at the opportunity to speak with many of his Indian friends. He spoke about the importance of practicing Ahimsa (non-violence) and Karuna (compassion) in modern society.

“We must pay more attention to our thousand-year-old tradition of Ahimsa and Karuna. I hope Indian schools and universities give more attention to India's tradition in education through secular way, without religion, but only warm-heartedness,” said His Holiness the Dalai Lama.

“Modern education has led to too much emphasis on material life. We need to revive our own ancient traditions of Ahimsa and Karuna. In order to create an environment of peace and happiness, humanity needs more warm-heartedness. Together, the Ahimsa and Karuna of culture can teach the world a path of tolerance, thoughtfulness, and compassion,” His Holiness said.

He said that India can combine the ancient Indian knowledge of Karuna with modern education secularly because human nature is more compassionate and not based on religion. He talked about scientists showing interest in peace of mind, which is the source of a healthy body and society.

“A number of scientists now believe that peace of mind is very important for individuals, communities, nations, and even the whole world. We should have a sense of community and oneness of seven billion human beings living together in this world. Different nationalities, colours, traditions are secondary. The most important is that human beings should live happily and peacefully,” he said.

After the talk, His Holiness interacted with the students of IIM Rohtak, responding to some of their questions. He emphasised the need for empathy, compassion, and broad thinking. "Today, we are more focused on short-term goals. As members of the larger society, we are only concerned with ourselves. We should be more compassionate to everyone, regardless of faith, race, or nationality," he said.

When asked by a student on what youngsters must do when they feel that in order to have a scientific temper they must detach themselves from religion, he said that the pursuit of truth cannot come without being a good person and a good person must have strong values. He also said that religion is a personal matter that comes secondary.

When asked by a student on how to overcome competition and the Western notion of survival of the fittest, His Holiness answered, “We have to think the community as a whole, not only about my own community and my own country. We have to live together and we should try to create one happy world.”

Thousands of viewers watched the event online, and Professor Dheeraj Sharma concluded the event by saying that the thought shared by His Holiness make us think differently about how we see the world and change our attitudes.