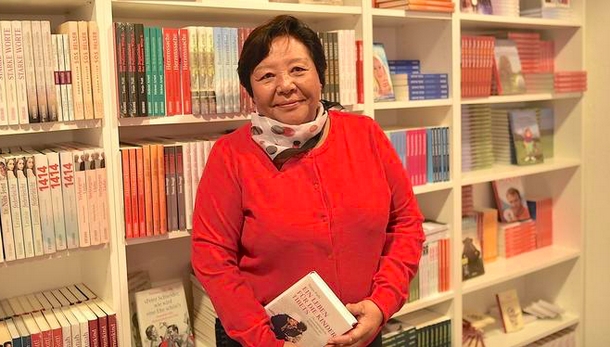 Tendol Gyalzur at the launch of the book in Switzerland about her life and achievements in Tibet. Photo: TPI/Morris Tennyson

A Tibetan girl who lost her parents and brother while fleeing during the 1959 uprising, but later returned to establish the first private orphanage in Tibet has died in Switzerland from COVID-19. Over a period of 25 years, the mother of two birth sons provided care and protection for 300 youngsters in orphanages and centres for the children of nomadic herders.

Tendol Gyalzur fulfilled the aspirations of His Holiness the 14th Dalai Lama after the young girl from an Indian refugee camp eventually raised in Europe in the hope that exiled young Tibetans would one day return to their homeland, and just like flower seeds, would bloom in their native Tibet.

Born in Shigatse, though she knew neither the day nor the year of her birth, Tendol was at one time abandoned en route by her fellow Tibetans as they fled over the Himalayas only to run after the group and re-join the party of exiles crossing to Bhutan and onto northern India. She was among an estimated 80,000 Tibetans who were to flee the suppression of the uprising against Chinese rule in Tibet, a tragic event that left tens of thousands dead.

Selected from a refugee camp to be immigrated to Europe, one of her most enduring memories was from an audience with His Holiness the 14th Dalai Lama who prophetically declared that after being educated and raised in Europe, the group of children would one day return to Tibet to serve their fellow Tibetans. “Share your happiness with others, he said, share your happiness,” Tendol recalled. An old black and white photograph shows the Dalai Lama, with Tendol to his right, after he implored the group of children to help rebuilt Tibet.

She was flown to Munich and adopted by two doctors who ran a children’s village orphanage near the German-Swiss border at Konstanz. She grew up with 11 other Tibetan orphans, but as well as suffering culture shock at being displaced, she also encountered racial abuse from Germans for the color of her skin. One of her initial experiences was being sick from eating too much chocolate at Easter time.

After high school, she trained as a surgical nurse, and later met her husband, Losang Gyalzur, originally from Eastern Tibet’s Kham’s Gyalthang, who had arrived in Switzerland in 1972. Red Cross first started re-settling Tibetans in Switzerland in the 1960s, with Switzerland now having the largest population of Tibetans in Europe. The couple moved to Switzerland, near Zurich, and raised two sons; one went on to be a professional ice hockey player.

Nearly three decades since she had fled Tibet, Tendol returned in 1990, this time bearing the distinctive bright red Swiss passport with its bold white cross. While other visitors in the capital Lhasa were marvelling at the enchanting Tibetan Buddhist architecture and magnificent high-altitude scenery, she came across two dishevelled children rummaging through rubbish for food scraps in the shadow of the Potala Palace. She took them to a nearby place to eat, but at first, the manager refused to let them in. “It was then, for the first time in my life, I realised that the only thing I wanted to do was fight for the rights of these abandoned children,” she said. “I know there are orphans all over the world, but I am Tibetan, and I wanted to help the orphans of Tibet.”

Back in Switzerland, her plan when down like a cup of cold yak butter tea with her family and many of her friends. Some tried to convince her that it was impossible, for she had neither the money nor the power to set up a charity NGO and deal with the suspicions of bureaucratic and xenophobic Communist China.

Undeterred, she took out her savings, raised donations and loans, and secured support from the Tibet Development Fund in Lhasa, which helped find free land for the project. Haunted by the images of the scavenging Tibetan street-children, which triggered her own memories of being an orphan, she returned in 1993 to open Tibet’s first private orphanage at Toelung just outside Lhasa. It started with just six children.

Through years of very hard work, requiring dedication, perseverance, and boundless love, ably supported by her husband and sons, and sponsors around the world, she went on to set up another orphanage in her husband’s hometown of Gyalthang in 1997, which was later renamed Shangri-la to foster tourism. Five years later they established a centre in western Sichuan for the children of nomadic herders.

Unlike other orphanages which were either large and institutional or religious, Tendol didn’t impose any belief system onto the children at the non-denominational orphanage, saying that rather than being exclusively Tibetan Buddhist or Christian, the orphanages were not religious. In an interview she once said her work was practical and pragmatic, ‘my religion is wiping children’s noses’.

Concerned about the loss of Tibetan language and culture, she was pro-active in encouraging the use of Tibetan language, with volunteers teaching Tibetan after-school and in the weekends, and children learning traditional Tibetan songs and dances. Monks at local monasteries were frequent visitors, and at the Shangri-la orphanage, Losang helped many children become skilled horse-riders, with some following his footsteps and gaining honours in regional horse-riding events.

Walking the fine line between being able to operate in the challenging environment and gaining more government help rather than a hindrance, Tendol lobbied local officials to provide better resources to her endeavours and gained the confidence of other key figures, building networks with allies and fellow Tibetans. Lamenting the lack of initial support from authorities, Tendol said in Shangri-la the first gift to the orphanage was just one television.

Over time, her operation came to be regarded as a model for orphanages and child care. Unlike larger institutions which schooled the children in-house and often put up residents for adoption, Gyalzur offered her children greater security and allowed them to integrate into the local community, sending them to the nearby primary and secondary schools. Her homes featured flower gardens, pet animals, horses, and local house-parents. The orphanages in Lhasa and Shangri-la grew to accommodate around 50 children each.

The orphanages were listed in some travel guidebooks such as Lonely Planet, recommended as an organisation fostering awareness of Tibet and aiding the Tibetan people. This meant a steady stream of visitors, some offering goods and donations, others providing entertainment, or just playing with the kids.

Tendol’s limitless love to her children, her perseverance in providing more human-centric social services, and the distinctive Tibetan character of her orphanages inspired others, making her Shangri-la orphanage the first port of call for some NGOs which were kicked out of Lhasa during crackdowns on social enterprises with foreign connections. “She was one of the most amazing, selfless women I have ever met,” says Seattle-based Rick Montgomery. “Her work inspired me to start Global Roots, which supports charities across the world. By taking in as many orphaned or abandoned Tibetan children as she could manage, Tendol was experienced in navigating aid work while avoiding bureaucratic obstacles and cultural misappropriation.”

As Tendol’s surrogate children grew older, she became concerned about they might cope in the world as they left the protection of their ‘home’ to pursue university studies, work, and careers. In Shangri-la, which is heavily-dependent on tourism since the banning of illegal logging along the Yangtze catchment, her oldest son set up cafes and restaurants and founded one of the world’s highest altitude craft breweries. An apprenticeship and training scheme means around 80% of the staff at Shangri-la Highland Craft Brewery are from the orphanage, with older orphan residents learning hospitality skills at the cafes. The Gyalzur’s other son, Tseten, has helped fundraising for the orphanage in Switzerland and Germany, and also with the brewery, which now exports some of its award-winning product to Europe.

With nationwide changes to the administration of orphanages, and the better government provision of social services, the Gyalzurs (who had both passed the 65-year retirement age) closed the Lhasa and Shangri-la orphanages in 2017 and 2018, with the remaining children now cared for by official orphanages.

With Losang reaching 70 years, and Tendol in her late sixties, they returned to Switzerland having devoted a large portion of their lives helping others. Tendol’s full-circle story, from orphan to orphanage mother, was retold in a book released last October, “A Life for the Children of Tibet - The incredible story of Tendol Gyalzur” (www.woerterseh.ch/produkt/ein-leben-fuer-die-kinder-tibets/), published in Switzerland (in the German language).

Amid all the angst over the COVID-19 pandemic, which may have started from a cave bat in Yunnan province, Switzerland has recorded more than 30,000 confirmed cases of coronavirus, with over 1,500 deaths. One of those who was overcome by the respiratory disease was Tendol, who died on Sunday 3rd May 2020 in Switzerland.

Tributes to the Tibetan pioneer have come from around the globe, in many different languages, praising her selflessness in mothering those most in need of care. “Love is boundless,” said an article from Shangri-la, “And able to turn dry lands into a lush green pasture.”

On his Facebook, Loten Namling, an Indian-born singer, musician artist, entertainer and cartoonist currently living in Switzerland also expressed his condolences over Tendol's passing, praising her as "a true Tibetan social worker".

Namling said, its "sad to hear Tendol's death due to the Chinese coronavirus. I have met her several times and always found her very charming and soft spoken. She has done a wonderful job in helping Tibetan children in Tibet. Of'course she had to walk on a thin ice because of her work in Tibet."

"I was once asked indirectly by a swiss musician to perform at her charity program for her school in Tibet but was later turned down because of my ACTIVISM. However Tendol's contribution to the children in Tibet is praise worthy and remembered for!"

The views expressed are their own and do not necessarily represent the views of the Tibet Post International or the editorial.