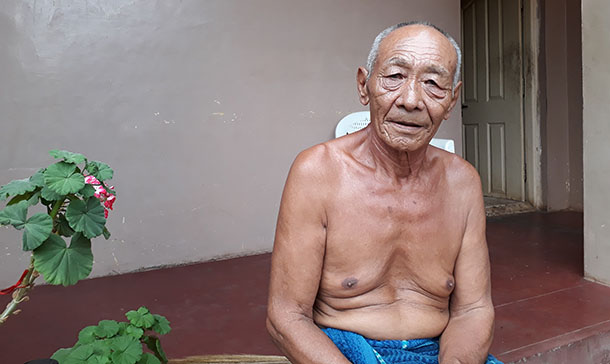 Kharkya at his old age residence in the Kollegal Dhondenling, one of the five Tibetan settlements in the south Indian state of Karnataka. Photo: TPI/Tenzin Tsomo

Kollegal, Karnataka, India — After the occupation of Tibet by Communist China, Tibetans fled in large numbers to the neighboring countries of India, Nepal and Bhutan. Many Tibetans were separated from their families in this process and since then, haven't met each other. Kharkya here relates his story of how he fled his homeland 60 years ago.

"My name is Kharkya. I was born in Ghongpa in the northern regions of Utsang in 1944. I am 76 years old now. When my family and i were living in Tibet, my parents were nomads. In 1959, in the month of December with the invasion of china, we were forced to flee our home. After fleeing, we first stopped at Lho Chumi Gyatsa [Mustang in Nepal]. This is an agricultural region that falls on the border of Nepal and Tibet. My family members consisted of nine members. Within the first three-four months of arrival at this place, all of them died. I was 17 years old then.

Our neighbors, the family that we came together with, went back north towards Tibet. The reason for their death was that because we had come from a high altitude where the weather is really cold and then all of a sudden we found our selves in this hot and humid place. Their body could not adapt to the change so quickly. This change in climate caused extreme Diarrhea. Other factors were lack of food. We had to walked through forest when we were fleeing and there was heavy rain showers and no food. Many people died in such conditions.

As I was the only surviving member of the family, I thought it'd be useless and tiresome to go back to where I came from like my neighbors did. Also I didn't think that my body would be able to bear through another ordeal. Therefore having no where to go, I stayed in this place for about a year or two and survived on Tsampa (Made from roasted barley flour) that I would beg around for but I had to stop this after my body became too weak and the soles of my shoes had worn out.

In 1961, the Dalai Lama's voluntary private army came to recruit people in the place that I was staying at. I joined the army even though my body was very weak. I was 18 then. In 1974, the army dismembered and I had to leave. We surrendered our weapons to the Nepali authorities and I headed towards India. In India,I stayed for two years in Manali where I did labour work in the construction of roads. Then we got a message from Mrs Jetsun Pema, the younger sister of His Holiness, to come work for the construction of nursery school in Dharamshala.

After having worked there for a while, Mrs Jetsun Pema informed us of the vacancy in Kollegal Tibetan settlement. I came down to Kollegal in 1979. I have been living somewhat decently since then, doing all sorts of jobs that came my way. Here in Kollegal; although we have one farm allotted to each family, it is very difficult for one person to work in a big farm. So when I was still young and vigorous, I went as a hired help for people who did winter business in the big cities. I lived like this for about 17 years.

As I grew old, it became difficult for me to continue this job as it was a lot of hard-work, especially when you don't get shop at a good spot. So when I heard there was a vacancy at Sera monastery's restaurant, I took it. I worked there for 14-15 years. I did all kinds of work. I worked in the restaurant and the garden. The salary wasn't much but there was security, so I stayed. I would sometimes get tips from the foreign visitors. Also because I was old, Tibetan people and other visitors would give me tips.

Since 23 March 2015, I have been living in this old age home. I don't have any relatives here as I never got married. In Tibetan culture, we tend to be very close with people who come from the same place in Tibet but I have very little people who are from my place Ghonpa in Tibet as most of them did not flee. Most of those who escaped died before or on reaching the border of Nepal. But I am content the way I am."