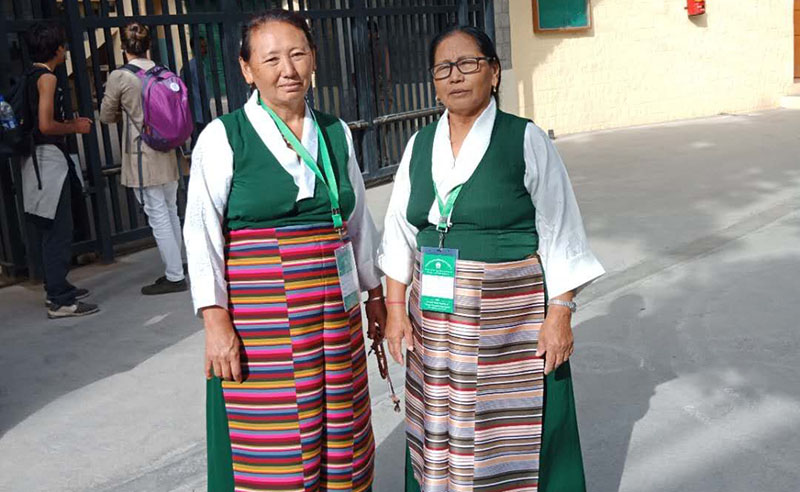 Tibetan Women’s Association (TWA) is a women’s association, formed officially on 10 September 1984 in Dharamshala. It was formed by Rinchen Khando, a former Tibetan youth congress activist. It has it’s branches in most of the Tibetan settlements in India. Here Phurbu Lhamo, the former head of the Tibetan Women’s Association Kollegal, talks about the struggle that they faced in the process of establishing regional TWA at Kollegal.

“How it started was that the TWA headquarter in Dharamshala sent a representative, Tenzin Dolma, to form a branch of the association in Kollegal. Since her arrival, we had applied seven times for the registration of the association but had been rejected all the time. On the eighth time, our application got accepted. We made ID cards pertaining to the Tibetan Women’s Association. People from village A, B, and T were the first to join and we became 60 members. Local Assembly did not approve of the formation of the association in Kollegal. So Kalden Norbu, a member at Local Assembly proposed to take a majority vote for the formation of TWA. We lost that vote. I later came to know that our Kongo (Head of the settlement) Wangdue Tsering had declared that TWA cannot be formed and that the supporters of the association who have benefits for destitute people provided by the CTA will be curbed.

“We tried a second time but were denied permission because of the 10th article in the Dhondenling constitution that stated that no organisation, other than Tibetan Youth Congress and the Office of Tibetan Freedom movement can be formed in Dhondenling. In the end, we appealed to the CTA and Home Department to support us in our struggle. Soon after, the local assembly had received from that said that they would not officially support TWA but had no objection to forming of TWA in Kollegal and another from the Dalai Lama’s office that said that in 1984, His Holiness, in his preaching had requested everyone to support TWA. We were not made aware of such letters and no action was taken.

“An election was held later under Kongo Wangdue Tsering to determine the fate of TWA in Kollegal. A true election should be one where the votes are cast in ballots but during this election, the voter had to write their names on a register with their address. All the members of TWA protested against this unfair election and we demanded the register to take this matter up to Dalai Lama’s office. Tenzin Dolma, the representative, appealed again at His Dalai Lama’s office. So this was happening in 2006. The Dalai Lama’s office sent another no objection letter. The local assembly realized that if they don’t acknowledge the second letter, it would be shameful on their side. After this letter, we were finally able to set up TWA in Kollegal on a condition that the association cannot encourage people to join the association. In the year 2007, it became official. It has been twelve years since and we are now in the fifth term. We got a lot of help and support from the TWA of other settlement which we are really grateful. And also Dzogchen monastery supported us through our struggle.

“The primary reason for establishing such an association is to empower Tibetan women. Take me for example. I had never been inside the Office of representatives but after joining this association, i got to know the office, the people there and i became more confident in speaking in-front of a crowd. It’s main objectives are to encourage women to be more independent and to voice their opinions. We also follow the path of Buddhism in carrying out our duties. I have met with many educated young Tibetan girls who are to shy to stand up and speak up in a crowd. There is very little participation from the young Tibetan people and so i was very glad when in a meeting in Dharamshala, I say young girls in the crowd.

“One of the girls spoke up and said that she used to hide away when people from TWA would come for recruitment mainly because there was so much to do. Our duties include cleaning the environment, selling tea and momo during big gathering such as sports tournament to raise fund and during “Raksha Bandhan (a Hindu festival), we go to urban cities like Mysore and Chamrajnagar and tie rakhi (a cotton bracelet or a thread) on Indian policemen asking them to help and support us Tibetans. Many people prefer joining the Tibetan Youth Congress because of this. I feel that as a Tibetan woman, one must first think of joining TWA as it is for the women. Some don’t join because of their husbands. Some Tibetan men in this time are still of the belief that women’s job is to wash dishes and to serve the husband. This kind of ideology,I think, is really deplorable.

“I have heard this story from Dalai Lama’s volunteer home-guard force about Tibetan women who surrounded Norbuling Palace, holding hands, to make a stand against His Holiness travelling during the occupation of Tibet by China. That night at six, His Holiness was escorted out of his palace en-route to India. The next day, many Tibetan women were arrested. They were made to dig their own grave and with hands tied behind, they were shot to death. On 12 March 1959, lots of women rose up and protested against this brutal massacre. This has now come to be recognized as the Tibetan Women’s Day. I think that this day should not be spent celebrating with pomps but rather spent it reflecting on the heroic action of our ancestors. We cannot forget the tragedy that brought this day.

“The only hardship that we face now is the lack of funds. We raise funds by selling tea and snacks during football matches and festivals. Also when people see us cleaning the environment, they donate money. We can raise only so much money by just selling snacks.

“In Hunsur and other settlements, if a woman has been elected for TWA, she has to join the association irrespective of whether she might be a member another association. She has to leave her previous membership. But this doesn’t happen in Kollegal because at the commencement of TWA here, we had been told that we cannot promulgate and advertise for membership.