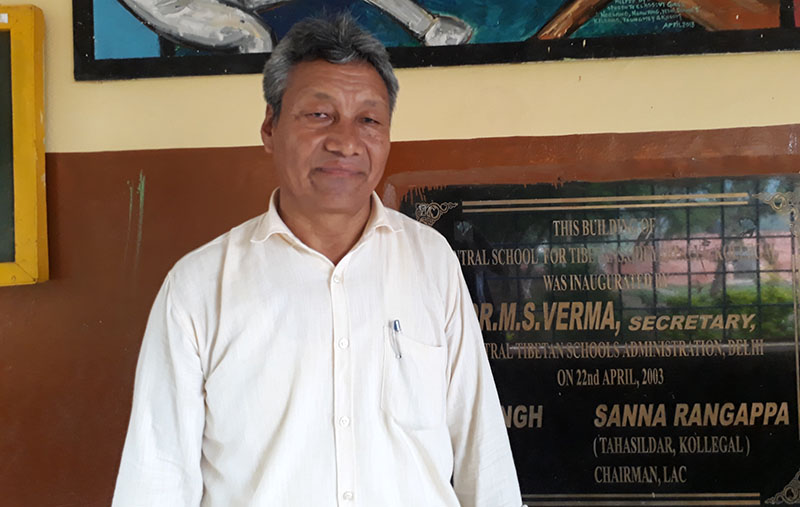 Dhondup Phuntsok, an English teacher and most senior in the CST at the Dhondenling Settlement, South India. Photo: TPI/Tenzin Tsomo

(Central School for Tibetans now changed to Sambhota under the Department of Education, CTA)

Dhondenling's one and only school that every Tibetan children living here attends is Central School for Tibetan children (CST). CST was administered by Central Tibetan School Administration (CTSA) which is an Indian Government organisation and is affiliated to the Central Board of Secondary Education (CBSE).

Dhondup Phuntsok, an English teacher and most senior in the school, speaking on the school, said,"After the establishment of Dhondenling settlement, MYRADA (Mysore Rehabilitation and Development agency) which is an Indian non government organisation, that had helped in the forming of the settlement, set to work on the project of establishing a school for the Tibetan children. They cut down the forest and built the school."

"They had also helped built the hospital in the settlement. The school was established in the year 1974. MYRADA closed the project soon after and it was handed over to CTSA that is Central Tibetan School Administration under the Government of India in 1978. So from 1978 to 5 May 2018, it had been administered by CTA and from that day after, it has been transferred to Sambhota which is managed by CTSA, Central Tibetan School Administration," he added.

As to the number of students attending, he said,"In the earlier days of the school, it had one of the most population of students among day schools of that time. Students joining in from kindergarten were more than 100 in number. So we had to divide one class into two to three sections and each section had more than 40 students. Because of the big population, there was shortage of class room and so we had to make use of the dining hall as class room. Over the time, the number of children reduced and now we have only about 230 of them.

"When the school was under MYDARA, it had classes til the fifth grade. The children who wished to continue studying further were sent to Mussourie or Dalhousie. After CTA overtook the management of the school, they extended it til middle school and then til tenth grade. As of now, the school has classes from first standard to tenth," Phuntsok further said.

"After they graduate tenth grade, the students who take up science and commerce as their stream, continue their high school in CST Mundgod. Earlier when there was the choice of Art stream, students would also join CST school in Bylakuppe to study art subjects. It is necessary that parents accompany the students when they join eleventh grade in another town," he stressed.

"The school has a lot of departments. We have gym, carpentry, needle work, computer lab, MLL that is minimum level of learning, resource centre, examination centre and the administration office. As for the infrastructure, we have a big football ground and a well maintained basketball ground as well. We have co-curricular activities throughout the year."

He told the TPI that "There are competitions among the four houses in football and basketball. Likewise there are also indoor games, debates, poem recitations, story telling and for the juniors, there are fancy dress competition, drawing and poem recitation."

"From the school, we provide the students with free textbooks and notebooks at the commencement of a new session. We also provide them with free midday meal," Phuntsok further added.

When asked about his opinion and hopes for the school ,on being transferred to Sambhota, he said, adding: "I believe that once Sambhota takes over the school, students' knowledge of Tibetan language would improve greatly. I sincerely hope to see it happen."