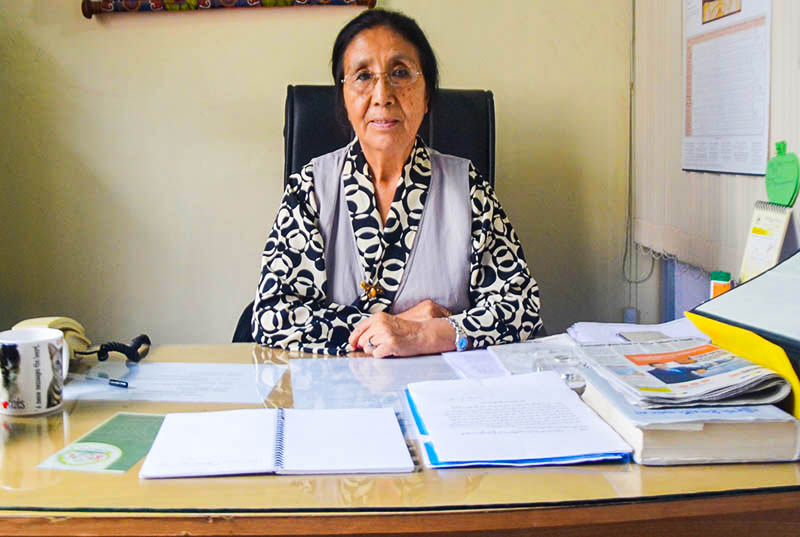 Dharamshala — The main aim of the Tibetan Women's Association (TWA) was of a political nature and involved fighting for what was theirs: Tibet. However, as the years went by, "we realized that this was very difficult but at the same time we had to see that Tibetan's in exile had access to education and other facilities,"said Dolma Yangchen, President of the TWA.

"First of all, we need to keep our identity alive, for that we have to preserve and promote our culture, religion, language. It is not possible for the government alone to handle all these things so our women's association felt they had a duty to get involved in social service wherever it was necessary," she added.

Dolma further elaborated on the environmental situation, "the Chinese are destroying the Eco-system in Tibet. The life of the nomads has completely changed because they are not allowed to live their lives as accustomed to, they have shifted from their familiar grasslands to the towns." She stressed on the importance of preserving the Eco-system and advocating the problems in Tibet.

"We advocate these situations to the world. We cannot go personally, neither can we send them money. The only thing is that we try to reach these people by seeking help through the people of the world, the United Nations, EU." she mentioned.

On enquiring about the status of gender equality in the Tibetan community and the biggest difficulty faced by Tibetan women today, the TWA President spoke of issues faced by women worldwide on the family front. The concern seemed to be notions held about the working mother. "In some ways we are equal, in many ways, we are equal because right from education onwards, there isn't any difference made by neither the parents nor the government. Girls can go study as much as they like, just like the boys."

However, the main difference lies when girls are required to think twice between starting a family and being a working woman. "So, if you get married early, you'll have a family and so being a working woman, you'll have to think a lot because you'll have to take care of your family as well as you have to see that your work is done properly in the office. If your husband is cooperative, then he may share work at home, otherwise, a woman has to face a lot of hardships."

Dolma went on to explain this internal conflict as the reason behind declining birth rates. Younger couples having less children is detrimental for the Tibetans as "there are fewer of us to begin with". Out of the 1.2 in existence, several have been killed by the Chinese and 150 have self-immolated. "If the younger generation does not produce children, then the Tibetan population will suffer a lot. But at the same time, we cannot force anybody to have more children, we are only trying to encourage them by supporting them financially."

As an organization that represents half of the exiled population, she listed a few steps taken by the TWA to empower the female community successfully. Women who are new to the country are taught to tailor over a period of 18 months and are also given a monthly stipend. "On completion of the course, they are quite independent, they get a certificate and then they can start earning, they are empowered." she informed. In addition to tailoring, these girls are also given Math and English classes lasting for an hour each.

Fresh graduates are given an opportunity to learn skills offered by the TWA. "They are taught how to take responsibility, how to run the office, how to communicate, how to organize meetings and lobby people. Even if we are not able to give them a very high salary, we provide them with the required facilities to start their life." Most of the women parliamentarians have gone through the office, working as staff members and earning their recognition through TWA.

The TWA leader in Exile went on to the address the disparity in education between the monks and the nuns. "There was a time when the nun's education was so different from the Tibetan monks. Monks could study as much as possible and they got their degrees, but the nuns were not given a chance. They just learnt the basic religious rituals." His holiness wished to provide nuns with the same learning opportunity and in time, he was able to convince the heads of different religious sects to equalize education. "That is how the nuns started studying. We work very hard for the nuns and we give them training, just like we do with the university students. We are quite satisfying and we do a lot of taking care of the older peoples' needs as well as the youngers'."

As for Dolma's message to women and the younger generation, she says, "I would like to see Tibetan women being in the decision-making position, they can work still harder and give back to the community." One's learning should be useful for the community as individuals are not born to survive for themselves but are required to work for the benefit of others. "We are in a state where we don't have our own country and so we have to think of this first before we think of ourselves."

To best achieve their goals, TWA functions as a democratic organization. The members of the Central as well as the Regional Working Committees are elected by their respective members for a fixed term. The headquarters of TWA is in McLeod Ganj, Dharamshala, and it is from here that TWA issues guidelines and directives to the branch offices for the coordination of their activities.

The Chinese occupation of Tibet lead to the formation of the women's organisation in 1959 in Lhasa. Women from the three different provinces; Ü-Tsang, Kham and Amdo, united in their struggle for independence, initiated protests against the Chinese, resulting in bloodshed. Hundreds of these women suffered brutally at the hands of the Chinese troops as they were arrested, imprisoned, tortured and beaten without trial.

In the same year, His Holiness escaped to India where he took refuge along with 80,000 people who had followed his footsteps. The Tibetans had undergone numerous changes as they were required to adapt to the hot Indian climate, a stark change from freezing temperatures in Tibet. The existence of a language barrier also made it difficult to communicate and deepened problems. Despite these difficulties, the Tibetans were grateful for their life in India and thankful to the people and the government of India who had welcomed them.

During this period of transition, many Tibetan women's groups were established in the different states in India such as Darjeeling, Dharamshala, Gangtok, Rajpur and West Bengal. There were Tibetan handicraft centers where women worked in groups to earn their livelihood and preserve their Tibetan culture through the weaving of carpets.

On the 10th of September 1984, with the blessings of His Holiness, the TWA has established various regional chapters. Today, the TWA has over 16,000 members and 57 branches worldwide including those in India, Nepal, Europe, Japan, Australia, Switzerland, the United States of America and Canada.